Maryland gymnastics is excelling in the gym and the classroom 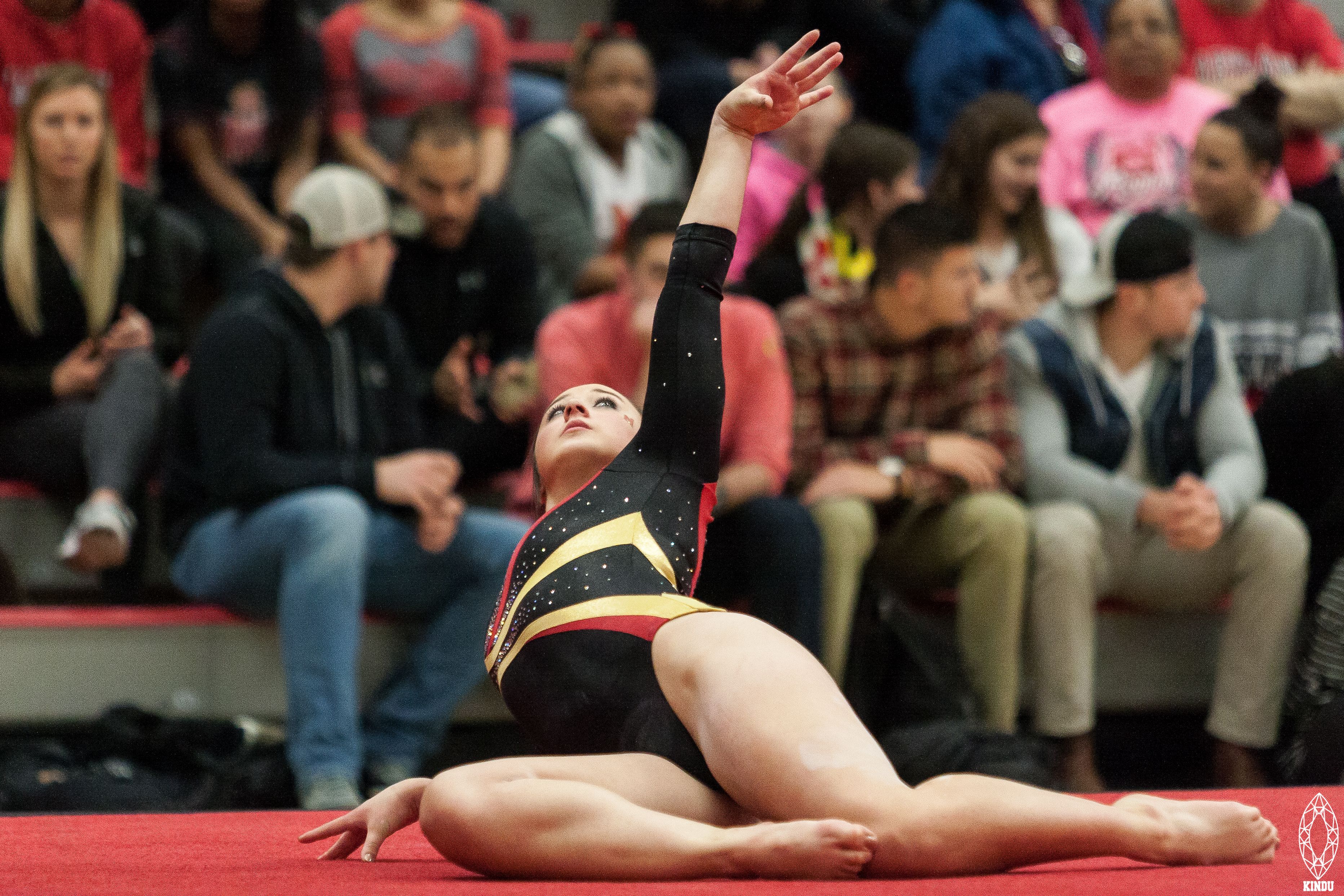 Freshman Kirsten Peterman poses during her floor routine in Maryland’s Red vs. Black matchup on Dec. 9, 2016 at the Xfinity Center. (Marquise McKine/The Diamondback)

As a sophomore last year, Kirsten Peterman earned Big Ten Winter All-Academic honors, one of six on the Maryland gymnastics team to do so.

Peterman will graduate a year early this spring, but she’ll return to this university next semester as a graduate student — and she’s doing that all while racking up 9.8s for No. 29 Maryland.

Peterman has found a perfect balance between gymnastics success and academic excellence, highlighting the team’s dedication to their craft and their studies as they continue to work toward another NCAA Regionals appearance.

“She works extremely hard, both in the gym and on her academics,” coach Brett Nelligan said. “For her to graduate in three years and to get into grad school … it’s really a testament to how hard she works.”

The Cambridge, Ontario, native credits her turbulent prep career — she attended three different high schools over a three-year span — as the force that helped push her toward the academic success she has achieved at Maryland.

“Looking back, [those] years have [provided] me with skills related to time-management [and] work ethic that … have followed me into college,” Peterman said.

Peterman’s drive parallels that of the rest of the team, which strives to achieve in the gym but more importantly in the classroom. That’s best evidenced by the statement emblazoned on a sign in the Terps’ locker room, which lists three priorities: school, gymnastics and everything else — in that order.

“By us as a staff keeping that focus for them … I think it really helps them to see how important their academics are,’” Nelligan said.

Peterman is far from the only Terp excelling in the classroom. Deanna Magro, who was also a Big Ten All-Academic selection a season ago, entered the year as a junior but reclassified due to her high academic standing. She joins Alex Robinson, Megan McClelland, and Shynelle Agaran on the team’s senior class.

All five of the returning gymnasts who made the Big Ten All-Academic list last year are now upperclassmen, and their experience has helped them guide their younger teammates through the challenging schedule of college athletics and class.

“By year two, most of us have adapted [to school],” Peterman said. “But I always offer to study with freshmen … if they ever need any motivation or someone to work with.”

Additionally, many of the gymnasts are working toward the same degree — for instance, Peterman and Magro are both kinesiology majors. That’s allowed them to go to each other for help, strengthening team chemistry and helping improve grades.

“We kinda just use each other as personal tutors any chance we get,” Magro said.

In recent meets, the Terps have been at their best, earning a then-season high 195.975 on March 8 before shattering that mark with a 196.525 on Sunday to put them in prime position to return to NCAA Regionals.

However, for Nelligan, it’s the team’s commitment to academics that has been and always will be most important.

“When gymnastics is done, they’re going to go on and do amazing things out in the real world,” Nelligan said. “It makes me feel like they’re going to really make a difference in this world.”