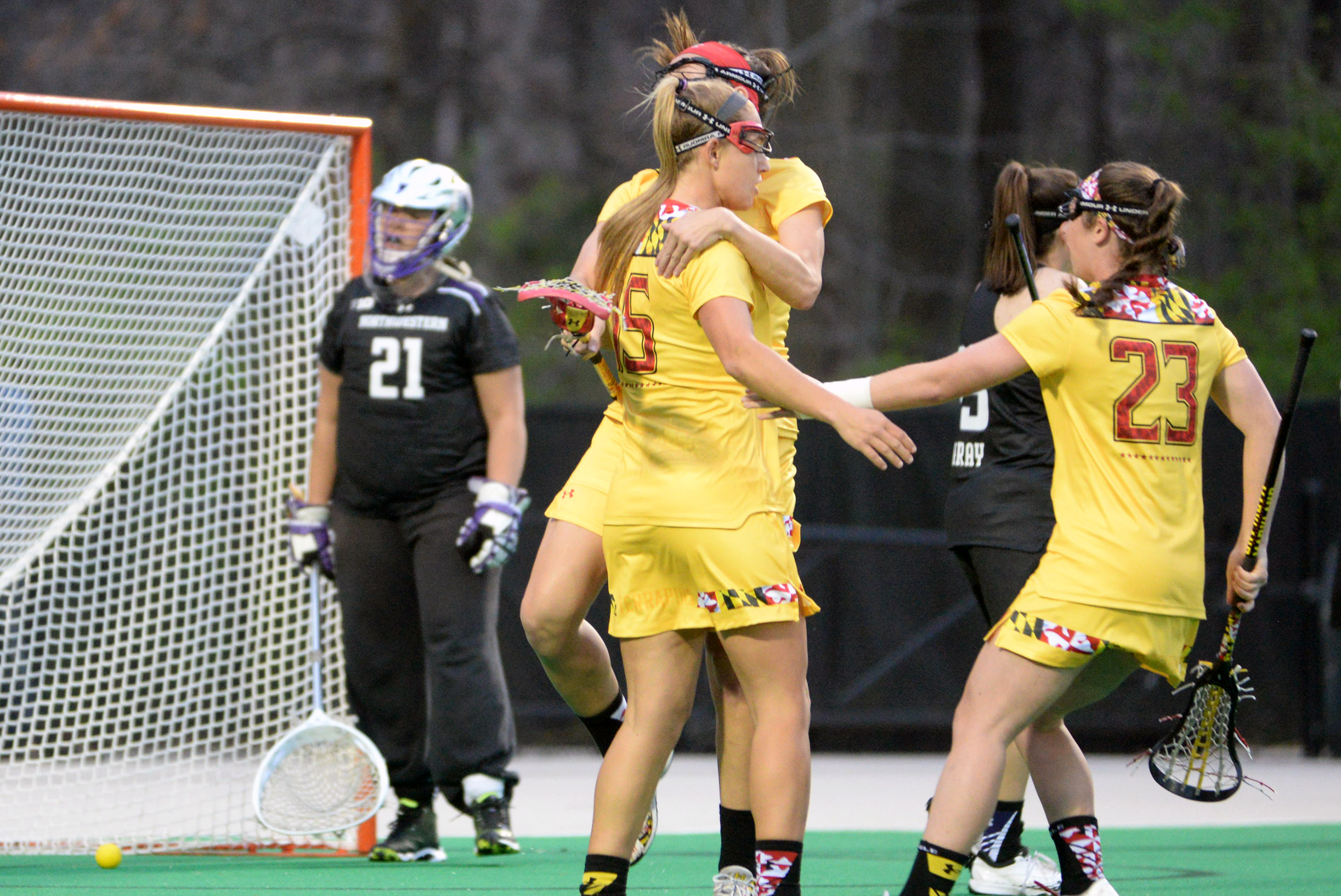 Terps celebrate a goal when they played Northwestern at the Field Hockey and Lacrosse Complex on March 30, 2016. (Sung-Min Kim/For The Diamondback)

Since the start of the season, Terrapins women’s lacrosse coach Cathy Reese has been waiting for her young team to put together what she considered to be a complete game.

Through the team’s first three games, Reese wanted to see improvement in the draw circle. Against North Carolina and Hofstra, she challenged her squad to limit its turnovers.

On a three-game road trip against three ranked opponents, Reese asked the Terps to not let up defensively.

In Thursday’s 17-4 victory over No. 14 Northwestern in their Big Ten opener at the Field Hockey & Lacrosse Complex, the No. 1 Terps did everything well. It was the most complete game the Terps have played all season, Reese said.

Midfielder Taylor Cummings, who scored a game-high five goals, led the Terps to their 13 draw-control victories facing attacker Shelby Fredericks. The Terps only turned the ball over nine times. And they held the Wildcats to four goals, tying their season low.

“We’ve developed a really big rivalry with [Northwestern],” said defender Alice Mercer, who fielded three ground balls. “This is the first time we’ve played our complete game from the start to the finish.”

Despite being outshot 18-10 and trailing 5-2 at halftime, the Wildcats still had an opportunity to attempt a comeback in the second.

But the Terps came out of the break and finished on a 12-2 run. About halfway through the second, the Terps pushed their lead to 10 goals, resulting in a running clock.

“In the first [half], we weren’t taking the best shots,” said attacker Megan Whittle, who scored four times. “Our defense played the best game I’ve ever seen a Maryland defense play.”

While the Wildcats were unable to capitalize on early opportunities, the Terps offense thrived early. Whittle scored 54 seconds into the game to spark a 4-0 run in the first five minutes.

Still, the Terps kept the Wildcats in the game by not scoring again for nearly 20 minutes.

“We were struggling to put our opportunities in the back of the net,” Reese said. “Came out in the second half on fire.”

The Terps haven’t had difficulty scoring against the Wildcats the past two seasons, outscoring Northwestern 50-14 in their past three meetings, including Thursday.

And Thursday, the defense was able to contain midfielders Selena Lasota and Kaleigh Craig, Northwestern’s two leading scorers. Craig scored once, while Lasota was held off the board.

“When you see all of the turnovers the defense caused, it makes you want to score a million goals,” Whittle said. “We were finishing on attack in the second half. “

From 1995 through 2001, the Terps won seven consecutive NCAA championships. Northwestern won five straight from 2005 to 2009 and lost to the Terps in 2010 before winning two more back to back.

The dominant programs met last postseason, too, in the quarterfinals. If they meet again later this year, the Terps will enter the meeting knowing they were dominant the first time around.

“This group is playing so well together right now,” Reese said. “This is all stuff we’ve wanted to see as we’ve gone along.”