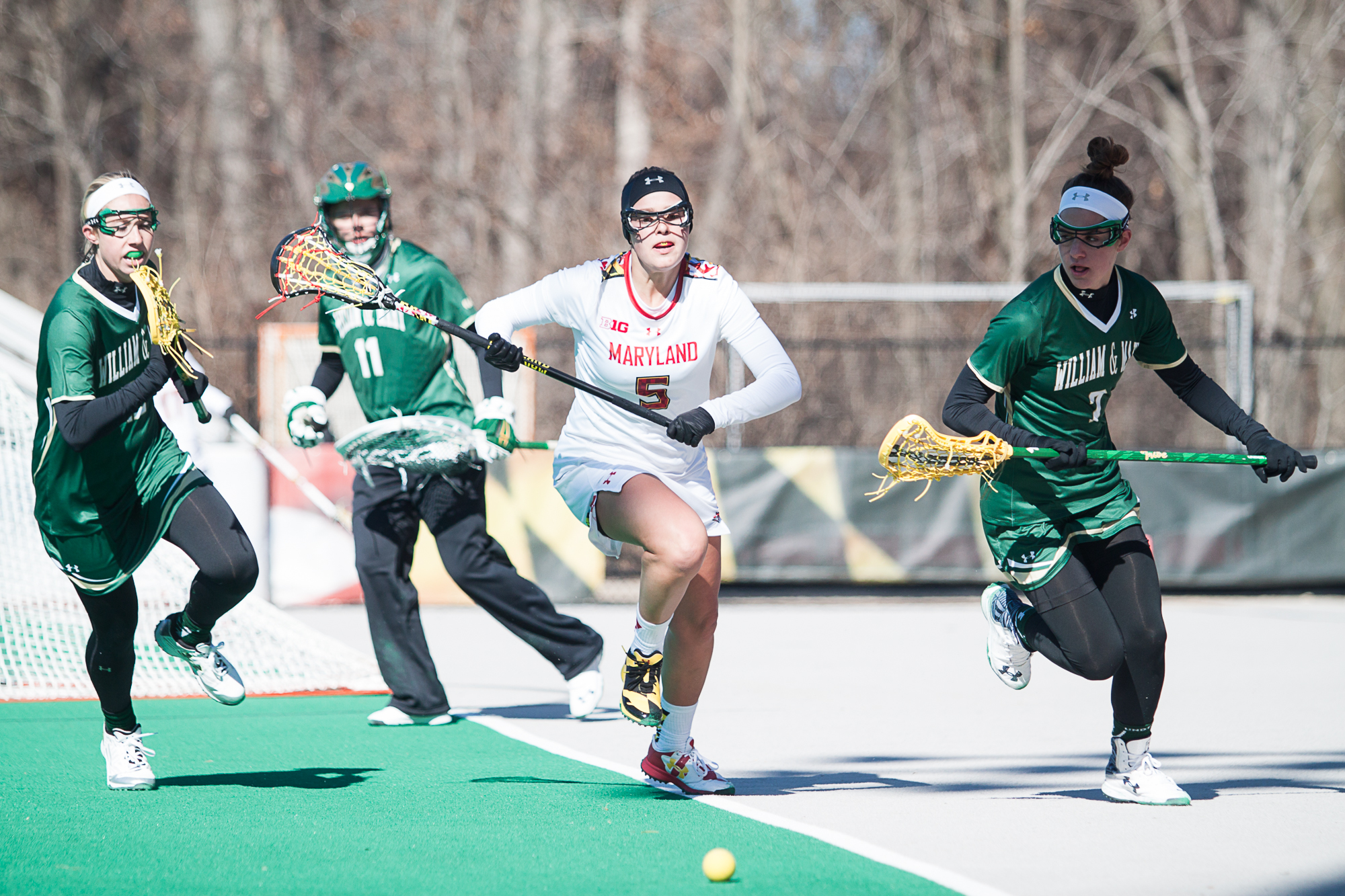 Jen Giles chases a loose ball during the Terps' victory over Georgetown at the Field Hockey & Lacrosse Complex on Feb. 14, 2016. (Reid Poluhovich/The Diamondback)

Ahead of its season opener against William & Mary, the Terrapins women’s lacrosse team spoke about having to depend on its youth and returning players who had not received as much playing time before 2016.

Braig collected a ground ball and Steele scored a behind-the-back goal just minutes into the first period to give the No. 1 Terps a 2-0 edge en route to a 19-7 victory at the Field Hockey & Lacrosse Complex on Sunday afternoon.

“We have a lot of new faces on the field and we’re just trying to get everybody involved,” attacker Megan Whittle said. “People are coming in off the bench and getting different looks. I think today was a good showing of that.”

The Terps’ fast-paced offense was dominant early, as Whittle scored the Terps’ first goal of the season less than a minute into regulation. Midfielder Shannon Quinn cut the Terps’ lead to 2-1 minutes later, but the Tribe couldn’t keep it close much longer.

Reese’s squad, which outshot the Tribe 32-12, ended the first period on a 5-0 run to take a 12-4 lead into the break. Steele said the team’s offense will only get stronger.

“Game by game, we’ll get better and it will be smoother and smoother,” Steele said. “We always knew as long as we kept moving the ball, we would score.”

Though Whittle opened the second half with her third goal of the game, the Tribe continued to be aggressive. For the first time that afternoon, after trying to slow the pace of the game offensively, they had success.

Quinn scored a pair of unassisted goals consecutively just more than four minutes into the second half. But Steele said the Terps continued driving offensively.

“We just knew we had to get the draws and settle down,” Steele said. “We knew as long as we kept moving the ball, we would score.”

The Terps did just that, scoring the next four goals. But defensively, Reese wants to see her squad have more success picking up loose balls.

“I know we had a lot of ground balls, but off the draw controls, there were just a lot of 50/50 balls out there that we weren’t getting to our sticks,” Reese said. “We need to be quicker to those off the 30s and off the circle lines.”

Senior midfielder Taylor Cummings was effective in both areas, though. In addition to securing a game-high four ground balls, she set a new career high with five caused turnovers.

“It’s her last ride and she’s here to play,” Whittle said. “We just saw that. I’m excited for her and can’t wait for the rest of the season.”

Defender Alice Mercer posted a goal in addition to securing two draw controls, and midfielder Zoe Stukenberg matched Cummings’ output with four goals of her own.

While Braig and Steele were the only freshmen to start, other rookies came off the bench to contribute. Attacker Kelsey Cummings and midfielder Jen Giles both scored their first career goal.

It was an encouraging start for a team that graduated 11 players from last season’s national championship squad.

“The freshmen coming in and people coming in off the bench, as a team we’re just getting used to playing with each other,” Whittle said. “I’m excited to get them involved.”