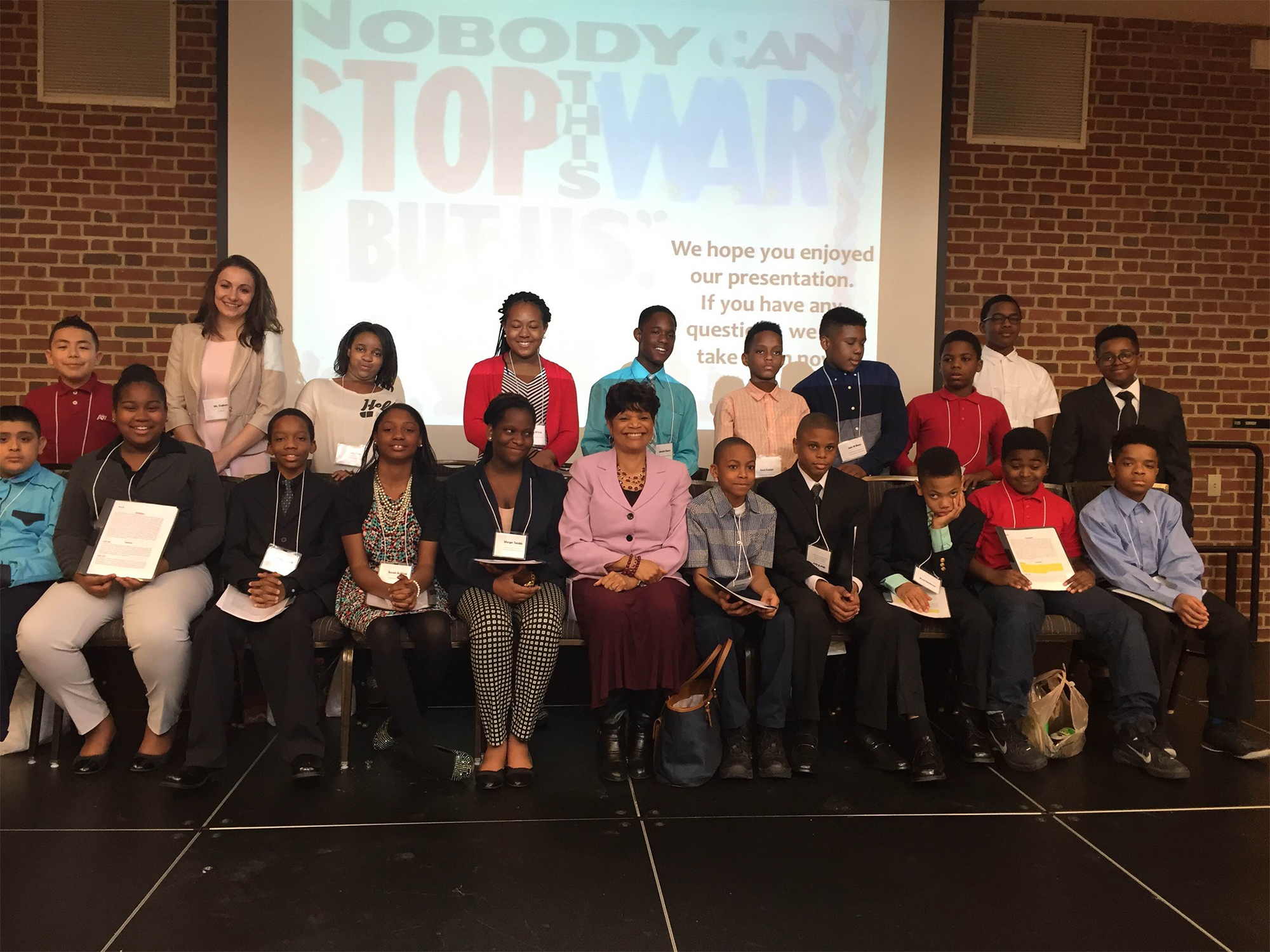 When Francis Scott Key Elementary School sixth-grade teacher Georgina Stephens asked the 20 students in her social action enrichment period what issue they were most concerned about, they overwhelmingly agreed: gang violence.

Within a year, those same students were presenting to Rep. Donna Edwards (D-Prince George’s) their self-created proposal for a multifaceted academic enrichment program designed to curb the influence of gang violence in their community.

“She was really impressed with it, which was so, so amazing for the kids,” said Stephens, a 2013 alumna from this university with a degree in elementary education. “They were on top of the world, they were so excited.”

Their class also presented their proposal to education professors at this university, Board of Education leaders and student groups in early March, hoping to gain support and raise awareness.

“It’s things that are happening in our community and we’re trying to figure a way out to help stop it; that’s why we made this program,” said Jarred Lewis, one of the sixth-graders involved in the project.

But that didn’t come without a lot of hard work, the students said. They formed and worked on six committees — introduction/closing, inspiration, background/literature review, proposal, budget and fundraising — to thoroughly understand the issue, prepare their proposal and make realistic decisions. They even formed incentive, discipline and hiring policies.

The students decided to create an after-school enrichment program to better support at-risk students so they can find positive outlets and, eventually, career opportunities.

This program first aims to serve fourth- through sixth-graders, incorporating a self-defense class, elective time, academics, counseling sessions, parental involvement and snacks. After the program gets off the ground, hopefully next fall, students hope to expand to older age groups as well, said Ciara Person, a sixth-grader who also worked on the proposal. They are estimating their program will cost more than $400,000 to fund food, tutors, self-defense instructors, social workers and counselors, and other personnel and programming for Francis Scott Key.

“It feels good to help our community out in different ways, and that’s just one step to helping out the whole world,” sixth-grader Tyree Muschette said. “This is important because too many young people are dying; it’s affecting us as a group of black people, and we’re just trying to decrease it.”

Though Stephens said gang violence might not be as prevalent or structured the same way in her students’ neighborhoods as it might be in some areas of Washington, there’s a reason they wanted to focus on this problem.

“A lot of our students, they do face certain dangers,” Stephens said. “Some of my students have been attacked or jumped, or people in their families have been. … It still is an issue for them.”

The students are working on finding different avenues for funding, applying for grants and preparing for another proposal presentation to the education board on May 12. The students are also planning other ways to spread awareness on the issue, such as a mural, play or open mic night.

“I have to say that I was very impressed,” said Francine Hultgren, an education professor who attended the students’ presentation in March. “The capacity of Georgina as a teacher to work on social justice dimensions with a group of students of that age took a lot of courage and thoughtfulness … and it took courage and imagination and compassion on the part of the students to come up with the ideas that they did.”

The group of students is determined to prevent gang violence in the community and combat any negative stereotypes associated with African-Americans in the area.

“Us being black African-Americans, the world is hard on us because they think we’re out there gangbanging,” said Jalen Williams, another student involved with the proposal. “We need to show them that we are people, too.”

The students said they were thankful Stephens gave them this opportunity and pushed them to succeed.

“My favorite part was how we expressed ourselves and how we represented ourselves as scholars,” sixth-grader Jabari Webster said. “Stopping gang violence is a very special thing in the world, so I’m very proud of us.”