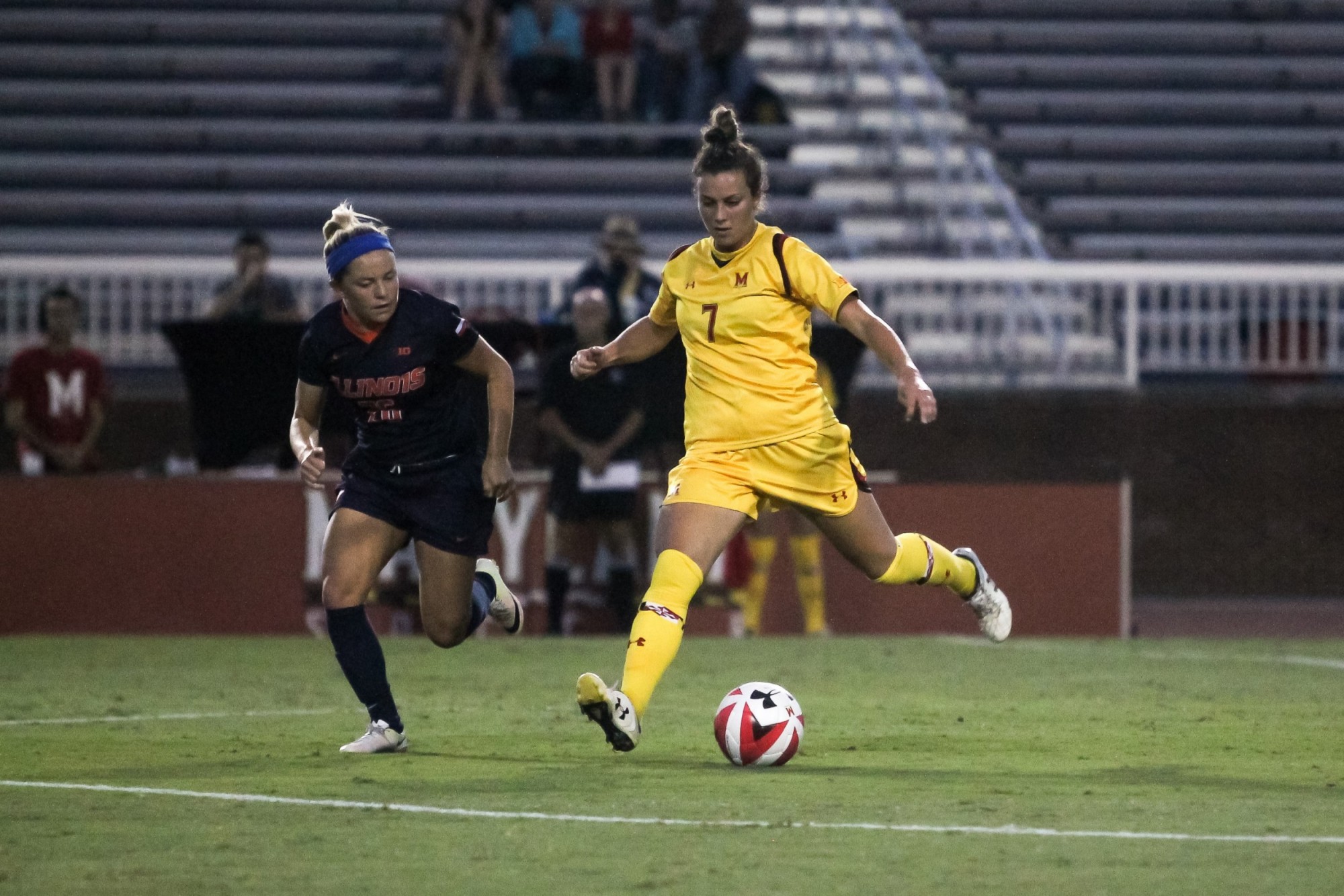 All week, the first-year coach told the Terps he wanted to see better passes and an improved pace. Leone tried different formations and had players set in different positions to gain experience. Players responded, connecting well with each other, midfielder/forward Madison Turner said.

As he stood on the field, Leone told the Terps to visualize how they would pass the ball and take their time in transition during their Big Ten home opener against Illinois on Thursday night. After watching his team fall, 1-0, against Rutgers last Friday, Leone was unsure how Maryland would respond.

But in the Terps’ 3-1 win over the Fighting Illini, they proved they understood Leone’s message.

“You could see it in practice,” Turner said. “We were trying to figure it out. I’m glad to see it translated to the game.”

In the fourth minute, forward Madison Turner jumped into forward Jarena Harmon’s arms. Harmon clenched her fists as Turner kept her hand on Harmon’s back.

Turner had just sent a pass from the Fighting Illini’s side of the field on a line in Harmon’s direction. Harmon outran a pair of Illinois defenders and deposited the ball into the lower left corner of the goal to give the Terps an advantage they didn’t relinquish.

The Terps, who dropped its Big Ten opener and entered the Thursday’s matchup on a five-game losing streak, controlled the game early.

About two minutes later, the Terps struck again. Turner attempted to convert a cross running toward the right side of the box. Forward Chelsea Jackson then jumped and headed the ball into the right corner of the net with Illinois goalkeeper Michelle Denley diving forward, trying to make a stop.

After not scoring against the Scarlet Knights, Maryland’s offense recorded two goals in the game’s first five minutes.

After Illinois midfielder Allison Stucky scored from the left side of the box in the ninth minute, Maryland responded.

Harmon, who is the first Maryland player to ever score twice in a Big Ten game, headed the ball into the right corner off of midfielder Jlon Flippens’ free kick to give the Terps a 3-1 advantage entering the intermission.

Maryland outshot Illinois, 6-5, in the first half and led at halftime for the first time since Aug. 28 against Penn.

Ten games into the season, the Terps have matched their goal total from last season. For the first time in program history, they were on the winning end of a Big Ten matchup when scoring three goals.

“They were sharper in terms of trying harder to keep possession of the ball,” Leone said. “Even when you’re under incredible pressure, if someone has time and they can make one pass out, you’re not defending for 30 seconds. That’s what they did tonight.”

At halftime, Maryland discussed what to expect from the Fighting Illini, who dropped seven of their last eight games entering the contest. The Terps expected Illinois to be aggressive.

“That’s something Ray had been talking about for a long time, being able to close out the game and hold off the other team when they’re coming at you like that,” Turner said. “We kept them on their heels, even on a couple of their chances in the second half.”

On Friday, Maryland will watch Northwestern face Rutgers in preparation for facing the Wildcats in College Park on Sunday. As Leone plans for the Terps’ next practice, his approach won’t change.

“It’s the Big Ten — nothing is easy,” Leone said. “This [game] meant so much. Both teams have been struggling. What a performance by our girls.”