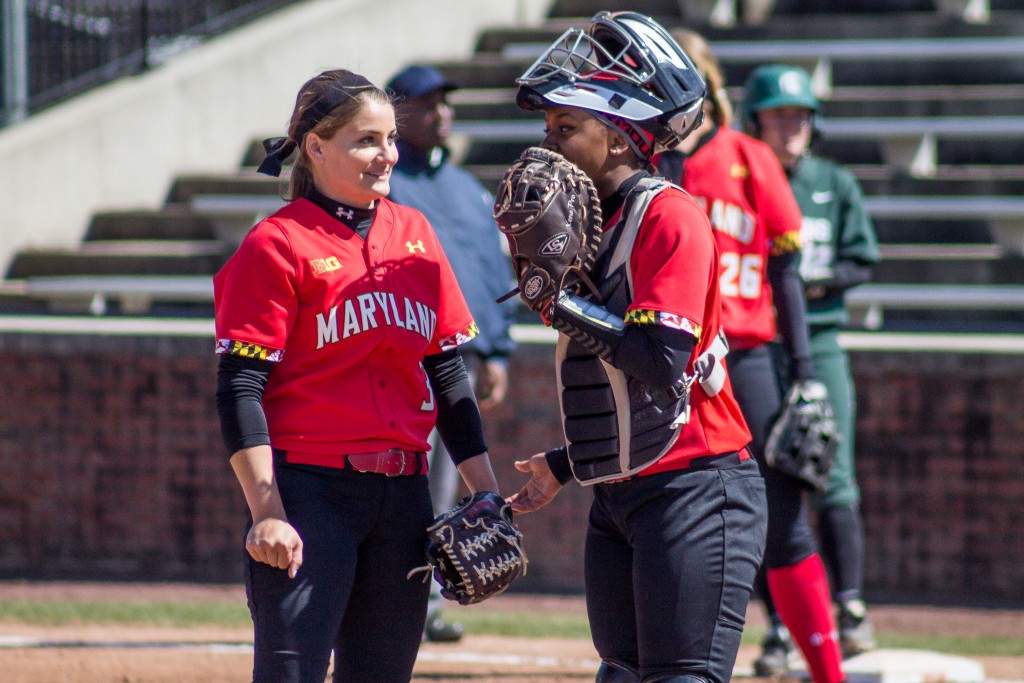 Before Maryland softball’s season finale against Wisconsin, four seniors met in the pitcher’s circle, like always, for the national anthem. But when the music started, each of them clasped hands.

Corner infielders Juli Strange and Jordan Aughinbaugh, pitcher Hannah Dewey and catcher Kristina Dillard added that feature to the pregame routine of their final Maryland outing. It signaled a togetherness that would end as soon as the Terps fell, 5-0, and finished last place in the Big Ten.

“We just want to leave it all out on the field,” Aughinbaugh said Saturday. “This is the last time all of us will play, so we don’t want to leave with any regrets.”

Maryland’s six seniors played under three different coaches, and were stuck in a liminal zone as coach Julie Wright builds her program with her own recruits. But the group made pivotal contributions to help that process.

While the Terps were swept by the Badgers to end the year, all six seniors started Saturday and Sunday.

Dewey and senior pitcher Madison Martin threw 18 innings this weekend, while combining for 285 frames this season. The pair led a young pitching staff.

“It was fun to watch them grow and develop because both have had to battle through some stuff in the career,” Wright said. “So, it was fun to see Madison come back this year and be able to pitch healthy, or fairly healthy, and Dewey, to have a really good year on the mound.”

Aughinbaugh supplied the Terps’ only lead of the weekend with a two-run home run in the third inning Saturday, the first long ball of her career. In the next frame, Dewey extended Maryland’s edge with her first homer of the year, and reached safely in all three of her plate appearances.

Wright assigned freshmen to mentors at the start of the season. Outfielder Amanda Brashear matched with outfielder Sarah Calta. Last season, Calta hit .408 in conference play before an ACL injury ended her junior year. After recovering, Calta finished with a .268 average in 26 starts. Brashear, though, led the team as a freshman with a .304 average.

“They’ve been able to draw on their experience and really help this younger group acclimate, and they’ve been through a lot in this program,” Wright said. “I’m just really proud of how they persevered and how hard they’ve played.”

Strange played the last two weeks of the season injured, but Wright let Strange judge if she could play Sunday. The Valencia, California, native reached base twice in her final game.

With two outs in the seventh, though, the redshirt senior gave the coach a look that indicated she was in too much pain. Strange exited the contest and her replacement, freshman infielder Brigette Nordberg, met her with open arms before reaching the dugout.

“Now my freshmen know what to say to the big freshman class that’s coming in,” Wright said. “We’ve got six coming in and six leaving, and now they understand what exactly they have say and how they have to say it.”