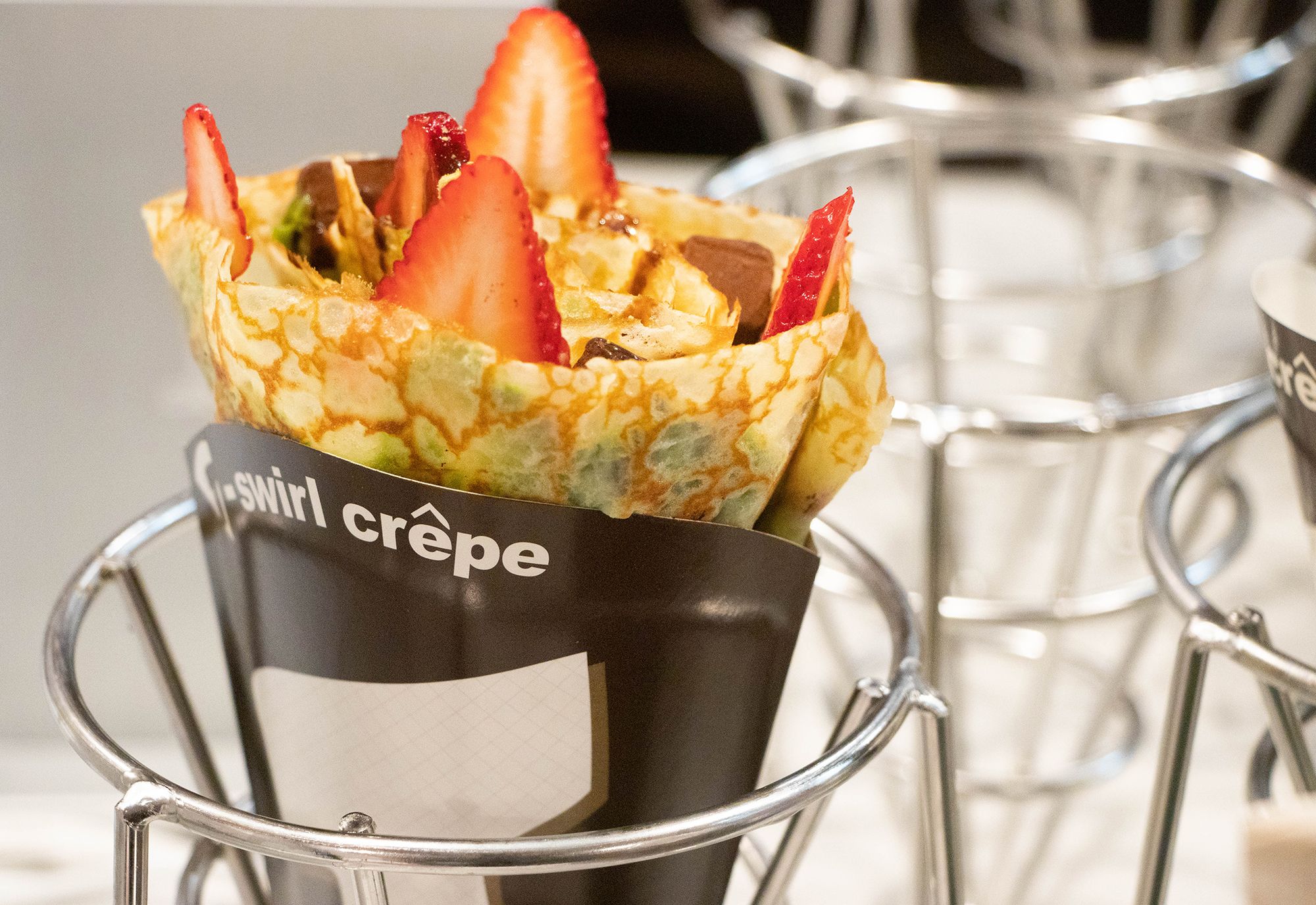 T-swirl Crepe, which opened its doors on March 5, serves a wide selection of savory and sweet pastries. (Julia Nikhinson/The Diamondback)

Route 1 has a new restaurant — and it isn’t a pizzeria.

Since last week, T-swirl Crepe has been serving up Japanese sweet and savory crepes at its new location, across from the College Park Shopping Center.

T-swirl presents a “modernized” version of the traditional western crepe that customers can “gobble on the go,” according to its website. A departure from the fluffy texture of a French crepe, T-swirl’s crepes are crispy and made with Asian-inspired ingredients and gluten-free rice flour.

The eatery offers a wide variety of crepes, from the Japanese-style Okinawa Hot Dog — a savory crepe with cheddar cheese, red onions and tofu sauce — to sweet crepes, such as the banana chocolate, which has chocolate truffles, whipped yogurt and chocolate custard.

Although the restaurant started serving customers March 5, it won’t be fully ready until its grand opening March 27.

The shop is still adding decor and light fixtures, soliciting feedback from customers, setting up its free WiFi and coordinating with mobile delivery services such as Grubhub, Uber Eats and Postmates, said Justice Johnson, the owner of the College Park location.

“The soft opening pretty much is like our pilot program to see how we’re going to go forward [and see] once we launch, what changes could be implemented,” Johnson said.

Johnson said he’s been checking Yelp during the soft opening for input. Not all feedback may result in changes, but Johnson said he’ll consider everyone’s comments.

Sophomore physiology and neurobiology major Cindy Chen came to T-swirl after seeing a friend post about it on Snapchat. While she said she liked the atmosphere and the crepe she ordered — matcha chocolate truffles — the wait was a little longer than she expected, and the buzzer to call her order wasn’t working.

“They could maybe do it a little bit faster,” Chen said. “I don’t care about how perfect [the crepe] looks, I just want it.”

T-swirl first opened its doors in New York City about five years ago and has since spread to more than 15 locations in New Jersey, Texas, Connecticut and Canada, said Kai Dong, an employee trainer for the restaurant.

At that location, Dong said customers favor chocolate crepes, such as the banana nutella. But so far in College Park, he said savory crepes and the mango deluxe crepe — which has fresh and dried mango, vanilla ice cream and whipped yogurt — seem to be the most popular.

Freshman biology major Connor Lu came to T-swirl Crepes after hearing about the shop from his girlfriend. He said he appreciated the menu’s variety.

“I think that’s really interesting because I kind of wanted a savory crepe, but [my girlfriend] wanted a sweet one,” Lu said. “So it’s good to have that option.”

T-swirl’s crepe prices range from $6 to $9. Customers can also add a variety of toppings, from blueberries and almonds to chicken, at anywhere from an additional $1 to $3 each.

Johnson said the restaurant prides itself on presenting quality ingredients — such as gluten-free rice flour and organic chicken and fruit — in an artful manner.

“The presentation is very important,” Johnson said. “At the same time, we can appeal to the health element by using natural, really good organic ingredients, [so] people are not consuming lot of synthetic foods that are out there today.”