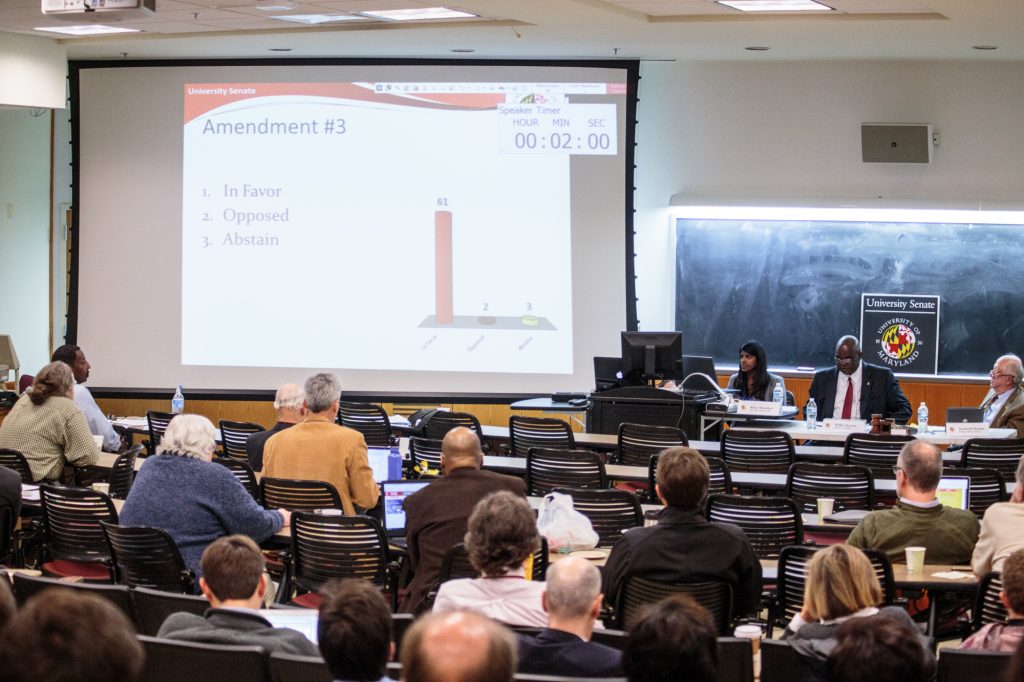 The University of Maryland’s Senate is voting Thursday on a proposed set of recommended actions that would clarify this university’s restricted research policy, further opening the door for collaboration with the intelligence community and inviting controversy from open research advocates.

The University Senate, this university’s primary policy-making body, will discuss and vote on this proposal Thursday at its first meeting of the spring semester. The subcommittee that examined the proposal ultimately recommended this university allow restricted research on a case-by-case basis.

Restricted research refers to limiting what research findings can be published, and may be imposed by corporations or done out of national security concerns, among other reasons. This corresponds with the school’s current approach, but the report recommends steps to provide more transparency in the process.

Proponents of the change argue it would bring much-needed clarity and guidance to the current working University System of Maryland policy from 1991. For others, it has raised concerns about the appropriateness of such research and how it fits with the academic principles of transparency. If the senate passes it, the report would go to university President Wallace Loh’s desk for approval.

Keith Marzullo, dean of the information studies college, was the subcommittee’s chair. Marzullo joined the subcommittee in August, coming from the White House’s science and technology policy office.

“The USM policy allows us to do restricted research, it’s just that the conditions under which it can be done are not clear,” Marzullo said. “There’s been a healthy debate. The committee has been in general agreement, but we want to get it right.”

While the subcommittee suggested this university continue to be an open academic environment, members identified some potential costs of adopting this restricted research policy, such as staffing for review and monitoring, training and security. The new revenue streams stemming from new research would likely mitigate some of these costs, the subcommittee found.

The subcommittee’s report also calls for the creation of transparency and accountability measures, including quarterly internal reports on any such research that are then presented annually to the senate.

“I think as the current USM policy stands, just in general, there was a need for this subcommittee to rewrite and maybe figure it out,” Tennyson said. “As our current policy stands, it’s very unclear.”

Tennyson also added although her peers don’t talk about the policy or idea of restricted research much — if at all — it is something she believes students should be more aware of.

The proposal vote comes as this university prepares to consider a plan to create the Maryland Global Institute for Cybersecurity, an academic addition that would deepen already significant relationships with secretive government organizations such as the NSA and with private companies that conduct proprietary research, which can remain confidential for a given time.

“The company would not only want to protect its own intellectual property, but may require the faculty member not to publish,” Boughman said. “That’s where we have to start looking at things very seriously because of the basic need for us to share information with the world.”

Some faculty senators expressed reservations about the proposal when it was first introduced.

When Provost Mary Ann Rankin presented the idea of the institute at a University Senate meeting May 5, Jonathan Katz, the director of the Maryland Cybersecurity Center, asked if it would take away resources from areas such as computer science and computer engineering. Ethan Kaplan, an economics professor, also raised concerns about the appropriateness of off-campus restricted research, according to the meeting minutes.

Potential delays in publishing research or having less academic freedom could place students or pre-tenure students at a disadvantage, according to the report. The subcommittee recommended unit heads advise those involved in restricted research, as criteria for getting a promotion or tenure don’t take unpublished research into account.

“[The] right way to manage this risk is to have oversight, people need to be able to say, ‘Should we do it or not’ for this specific project,” Marzullo said.

Michael Wertheimer, a former NSA research director and professor in the public policy school, said the raised concerns are legitimate ones that deserve to be addressed and monitored as plans for the institute go forward. The theorized cybersecurity institute was originally his idea when he came to the school in 2014 after finishing a career of about 30 years in the intelligence field.

Wertheimer, along with other university officials, pushed for a review and clarification of the policy, arguing its current form lacks clarity on what types of research are allowed.

Although there has been no formal announcement for the institute, it has been operating as an initiative under the provost’s office. Daniel Ennis, the executive director for the initiative, said an announcement could be coming either this month or in March.

To become a formal institution, the plan would have to go before the Senate, something that Wertheimer said he would rather do when he can demonstrate its success and have some momentum behind the idea.

If implemented, the cybersecurity institute would mean increased work with the intelligence community, and would likely bring in research revenue from the intelligence world, especially organizations such as the NSA and FBI.

Tapping into those funds wouldn’t benefit just researchers or faculty, Wertheimer said. To attract students, the institute would offer a scholarship component funded by companies that would allow interested students to graduate debt-free if they pursue a cybersecurity concentration. The money would be not be tied to any type of cash-for-work requirement either, Wertheimer said.

It would also benefit the nation, especially if this university could bring a unique benefit to the table, Ennis said.

“You need to explore all options to include restricted research to determine if that’s an area you could have strength,” Ennis said. “If you have strength there … you should do it.”

The current policy requires classified work to be done off the campus and only when it is “in both the university system and the national interest,” but Wertheimer said students would rarely go to buildings off of the campus.

Wertheimer, who dealt with these centers extensively as the NSA’s research director, said the Center for Advanced Study of Language could never get the linguistics department to work with them in “any meaningful way.” At the Laboratory for Physical Sciences, Wertheimer said even though about 80 percent of the work is unclassified and an entire floor of the building is dedicated for students, its off-campus location makes it seldom used or visited by students.

“I don’t want to do that with cybersecurity,” Wertheimer said. “I want us in.”

Under the current policy, the Center for Advanced Study of Language performs classified work in a guarded off-campus research park about a half-mile from the College Park airport. This center, created in 2003 with the NSA as its primary funder, was the first national center designed to support the intelligence community with its language needs.

“Cyber is becoming the weapon of the future,” Flores said. “So universities who really want to be deemed relevant need to understand how to do those things and train their students in them.”

This university, should it amend its policy, could be an ideal place to flesh out Wertheimer’s vision of a cooperative research triangle that academia would form with government and industry.

“The location of Maryland being close to D.C., close to the NSA, close to other academic institutions, I think that’s huge,” Ennis said. “If you want a triad … Maryland is ideally postured as the largest public university in the immediate metropolitan area to have success in the cyber fight. It’s just an ideal place to expand the cyber piece.”