Maryland field hockey had a feeling it would upset Duke. That confidence never wavered. 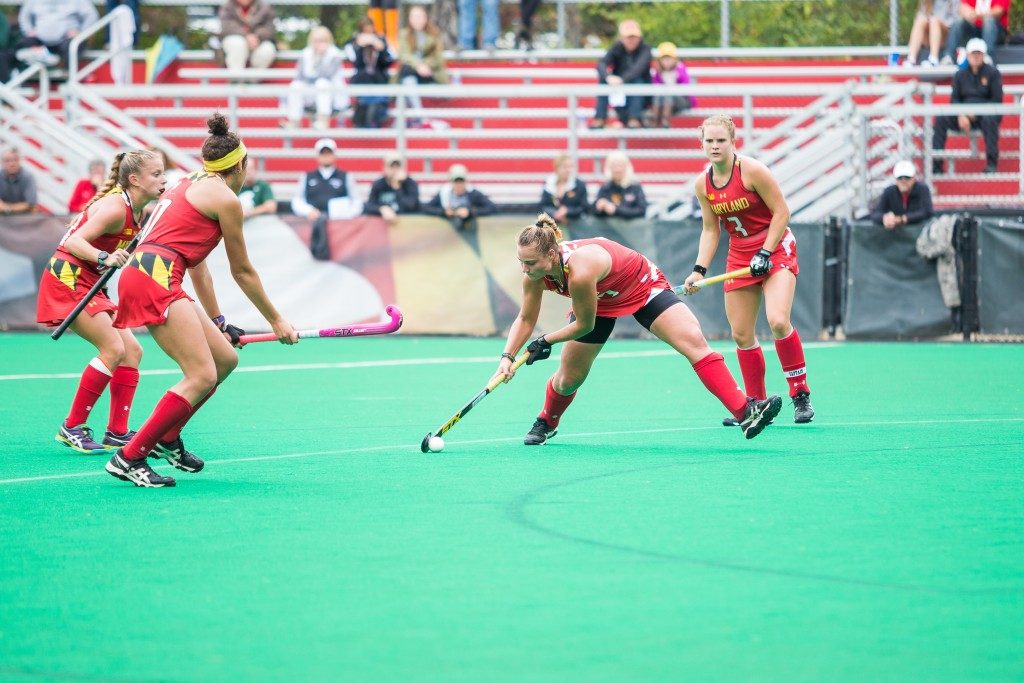 When defender Bodil Keus woke up at about 8 a.m. on Sunday to prepare for Maryland field hockey’s NCAA tournament quarterfinals matchup, her gut told her the Terps would find a way to beat Duke.

Keus and her roommate, midfielder Madison Maguire, made their way downstairs at the team hotel and talked strategy over scrambled eggs and oatmeal. They listened to the coaching staff encourage the No. 9 Terps to recall their game plan.

Assistant coach Katie Bam felt the way Keus did. At one point during the game, she proclaimed she had no doubt the Terps would advance.

Perhaps fueled by a late-season, seven-game winning streak, coach Missy Meharg’s team used that confidence to defeat the No. 2 Blue Devils, 3-2, in Durham, North Carolina. The win earned Maryland a matchup with No.3-seed Michigan in the final four on Friday as the Terps seek their first championship since 2011.

“We had this weird feeling that we were actually going to do great,” said Keus, the Big Ten Freshman of the Year.

After Maryland’s victory against No. 12 Wake Forest on Saturday, Meharg said the coaching staff had also spent time preparing for a potential rematch with the Blue Devils. The veteran coach, who has the Terps playing in their 23rd consecutive NCAA tournament, felt Maryland matched up well with its former ACC foe. Still, the Blue Devils tested the Terps.

Duke boasted a one-goal lead fewer than 90 seconds into the contest. The Blue Devils had little trouble moving the ball beyond Maryland’s midfield — success Wake Forest accomplished just a handful of times.

“We fell apart because this was a professional team against amateurs in the beginning,” said Meharg, who started five freshmen. “We were really on our heels.”

Unlike in their loss to the Blue Devils on Sept. 1, the Terps maintained the energy Keus felt build up earlier Sunday morning. In the first matchup against the Blue Devils, Maryland faced a daunting two-goal deficit in the second half. But on Sunday, freshman midfielder Kyler Greenwalt, off a breakaway pass from Maguire, tied the game at one.

Still, Duke remained aggressive into the second half. In the 42nd minute, Blue Devils forward Ashley Kristen gave her team a lead that appeared potentially sufficient to win. But Maryland wasn’t flustered. Meharg told her staff before the game if Duke boasted a one-goal edge late, it would struggle to maintain its edge. That proved to be the case.

Maryland responded to Duke’s defensive approach — which featured the Blue Devils falling back — by sending their top midfielders toward the forward line.

“We owned the last 12 minutes of the game,” Meharg said. “They fell apart. They were worried about winning the game versus playing the game, and that’s what happened. If you can keep it within a one-goal difference, you’re going to be in a position to win.”

Keus figured that would be the case all along.