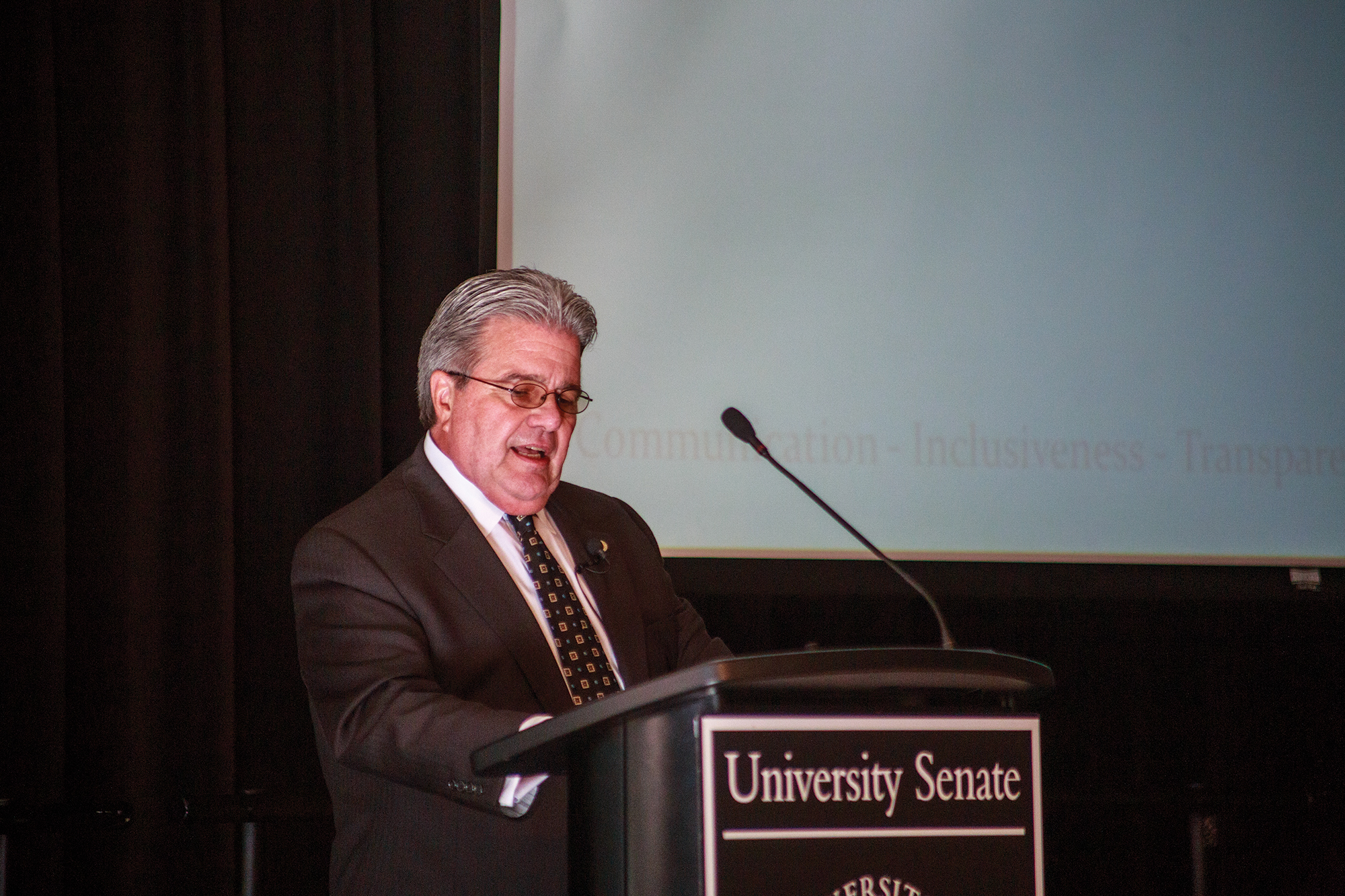 The University System of Maryland approved a combined $105,000 of additional pay for Chancellor Robert Caret during a closed meeting last Friday, The Baltimore Sun reported Wednesday.

Caret will receive a $30,000 raise to his base salary for fiscal year 2017 as well as a $75,000 one-off bonus, the system’s spokesman Mike Lurie said. The raise is a five percent merit increase, and the bonus amounts to nearly 12 percent of his new base salary (or exactly 12.5 percent of his salary before the raise, both of which are within the 15 percent allowed in Caret’s contract).

Concerns arose over the meeting’s closed nature, and The Sun reported that the system’s governing board held a “secret meeting” to vote on it. Lurie denied the meeting was secret, saying the board notified the public of its planned closed session by posting an agenda with a statement to close, its reasons for closing and discussion topics on its website a week earlier.

The system posted a news release on June 8 mentioning the meeting.

“I think the change in his raise really does have an impact … on the public and on students, so I don’t understand why it wouldn’t be a publicly conducted meeting,” she said.

Lurie said the performance review and discussions leading to a state employee’s public record salary fall within the personnel matters exemption to Maryland’s open meetings law, which “generally requires meetings of public bodies to be conducted in public,” according to The Sun.

Swanson said that while she recognized the board’s legal right to closed session for personnel reasons, this case made her uncomfortable.

Jennifer Bevan-Dangel, executive director of watchdog group Common Cause Maryland, questioned whether the personnel exemption was a valid reasoning in this case.

“The reason for the personnel exemption is if you have something that’s of a sensitive nature,” she said, citing allegations or performance review. “But when it comes to salary decisions or bonus decisions, those are budget decisions and they should be … solely discussed in a public way.”

Budget discussions are not exempt from open meeting laws, Bevan-Dangel said. She suggested salary discussion should be open “even if, for example, the employee review happened previously in a closed session.”

Lurie said the board followed the Open Meetings Act’s procedures, calling this sort of exemption “a standard practice that the law allows.”

Bevan-Dangel said that “the abuse of personnel decisions is a very common problem that we see, and that includes not having public sessions around salary decisions [and] bonuses.

“The fact that this exemption is abused often though does not make it … acceptable,” she said.

Bevan-Dangel said the system has “a pattern [of past open meetings violations] that is enough to cause concerns,” pointing specifically to the 2012 closed meeting in which the Board of Regents discussed leaving the Atlantic Coast Conference.

A USM news release from the time acknowledged regret over lack of public notice but maintained that sufficient exemptions existed to warrant the closed session. Following a complaint, the Open Meetings Compliance Board in 2013 found the Board of Regents violated open meetings law in the ACC case. It also found regular violations using another exemption in a separate ruling, according to The Sun.

“We are concerned that the University system seems to have fallen into that culture … of closing the door,” Bevan-Dangel said. “We hope that they will take a step back and really reevaluate how often they’re choosing to go into closed session and how necessary those decisions are.”

She also said Common Cause plans to advocate for changes to the existing law, which she said “is riddled with problems” including vague exemptions, lack of enforcement and lack of penalties. In addition to a public apology, violators must pay a “very trivial fee,” Bevan-Dangel said.

In this case, Swanson said the dollar amount in question raises concern.

“While I understand that [the pay increase] is in his contract, it is a lot of money … going to someone who already has a rather large salary,” Swanson said. While she said she had no opinion on the sum’s fairness because she “[doesn’t] know what it’s like to be a chancellor of a university system,” she questioned the combined $105,000 payout.

Bevan-Dangel said the amount didn’t matter, simply the violation itself.

“We’re looking at what is ultimately taxpayer dollars or student dollars, and is about decisions to spend the public money … made behind closed doors,” Bevan-Dangel said. “It doesn’t really matter if it’s $5 or $500,000 — it’s about public accountability for how their money’s being spent. And that’s what’s so offensive.”