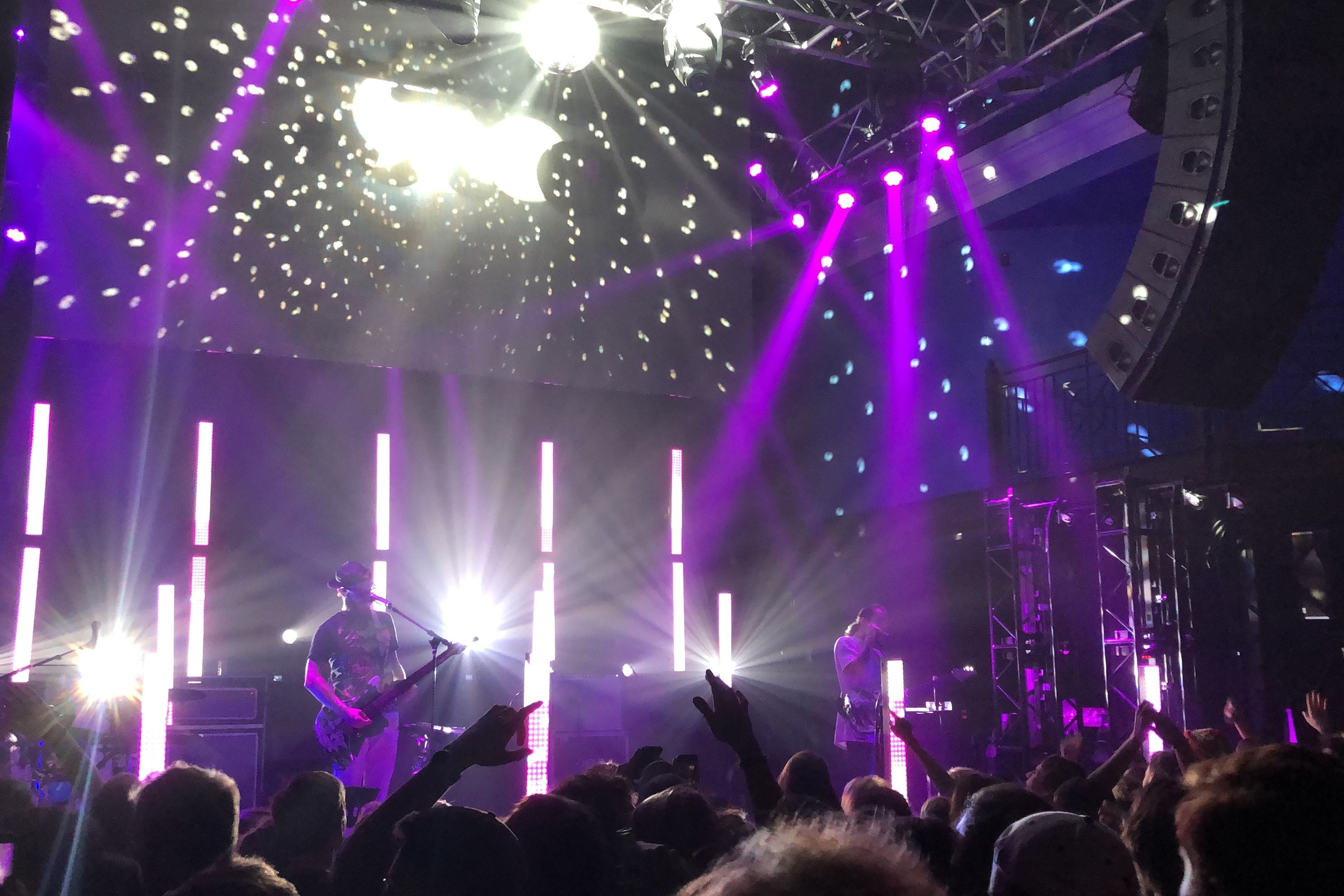 Cherub, an electronic duo made up of Jason Huber and Jordan Kelley, perform their song "Disco Shit" at the 9:30 Club on Feb. 22, 2019 (Photo by Allison O'Reilly/For The Diamondback).

I go to a lot of concerts, typically to see bands or artists with strong, dedicated fan bases that make the music feel spiritual.

I saw Cherub on Friday at the 9:30 Club, surrounded by a disconnected, mostly drunk crowd who knew the words to maybe half of the duo’s set — but Cherub’s passion for music and dreamy instrumental skills transcended my environment.

Jordan Kelley, the mustachioed bassist, and Jason Huber, the passionate vocalist/guitarist, are rockstars with a strong electronic twist. They performed extended jams on many of their songs, with heady bass solos and intoxicating guitar riffs made trippier by Huber’s talkbox — a small box connected to a tube that runs up the side of his microphone, allowing him to vocalize funky tones over his chords.

The diversity of attendees showed the breadth of Cherub’s fanbase, as EDM show veterans in mesh tops formed dance circles in between groups of white boys in long-sleeve button-downs and Patagonia vests. Couples abound grinded and made out while friend groups laughed at each other’s attempts at shuffling. Clouds from JUUL and dab pen hits hovered above us all as empty beer cans and plastic cups hit the ground, at times making the show feel less like a concert and more like a house party with a really sick DJ.

Rainbow lights circled the crowd as Cherub got funky on stage. Huber made a point to make the show feel deeply personal, by shouting out members of Kelley’s family spread throughout the audience and borrowing a hair tie from someone in the front row. Toward the end of the set, he stopped singing in the midst of a song to call out people fighting in the crowd, telling them to “chill” so nobody had to get kicked out of the venue.

After the song ended, Huber talked about how much it hurts him when fights break out at their concerts. He emphasized that Cherub shows are meant to be about spreading love and positivity while making sure everyone who came to enjoy the music is able to do so.

The duo performed some of their most popular tracks such as “Disco Shit” and “Chocolate Strawberries” as well as some of the lesser-known singles they released in 2018 such as “Dancin’ Shoes.” My personal favorite Cherub song “Do I(Where We Are)” inspired a powerful performance featuring a groovy bass jam from Kelley during the musical break.

Of course, they saved their frat party classic “Doses and Mimosas” for last — and it was the only song that had everybody in the crowd singing along, jumping wildly and holding their phones in the air to catch a shaky video. Kelley hopped into a crowd surf for the end of the track, still tickling his bass as the audience united to keep him steady in the air.

Cherub puts on a great show, point blank. Kelley and Huber perform with such a passion that shows they not only love their jobs and their art, but they love each other just as much. Their artistry was incredibly cohesive and high-energy, and even though they’ve been in the music game for almost a decade, there is no sign that their energy will wane any time soon.