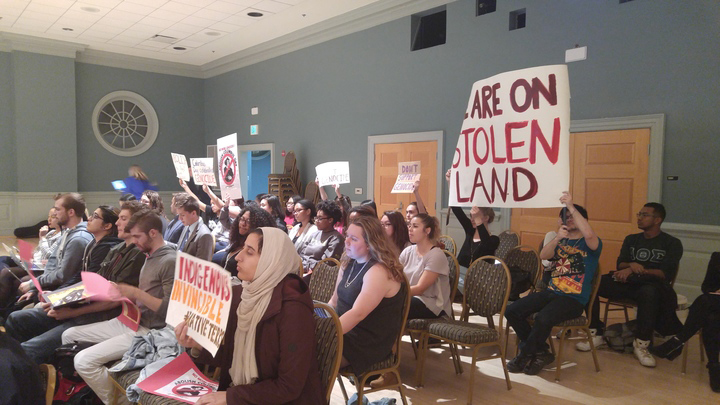 The resolution passed 21-8 with three abstentions. The Diversity and Inclusion committee began drafting it after the American Indian Student Union started a petition in the fall semester requesting the administration to change Columbus Day to Indigenous Peoples’ Day on all university materials. The Graduate Student Government passed a similar resolution in November.

More than 30 students, including AISU members, came out to hear the Student Government Association’s decision, with many holding signs such as “We are on stolen ground!” and “Don’t support genocide.”

For these students, the night’s vote marks a small — but important — victory.

AISU President Karla Casique said while this is a small change, she is hopeful that the resolution will lead to better representation of indigenous students on the campus.

Advocates say the holiday should be renamed because Christopher Columbus and ensuing colonization led to the enslavement of and violence against indigenous peoples.

Autumn Thompson, a junior American studies major and AISU member, testified in favor of the bill before legislators began their debate.

“We learned in elementary school to sing the cheer that Columbus sailed the ocean blue in 1492, but did we ever learn about the mayhem and destruction that Columbus’ so-called discovery made for the original peoples inhabiting there?” Thompson asked. “No.”

Casique, a junior journalism major, also spoke at the SGA meeting, pointing out that land in Prince George’s County once belonged to the Piscataway tribe.

During their debate, many SGA representatives emphasized the significance of the holiday’s name for indigenous peoples, discussing the violence and injustices that Columbus brought to them, including enslavement, murder and rape.

“I’m glad it did pass, and I’m glad that we had a lot people come out in order to back the bill,” the junior information science major said.

Two legislators spoke against the proposal. Kevin Johnson, North Hill representative and speaker pro tempore, said, “There’s a really fine line between erasing history and acknowledging what we did wrong in history.”

“While I do recognize Columbus did many bad things, I think we should try to recognize both sides,” the junior government and politics major said.

One solution would be to celebrate Indigenous People’s Day as its own holiday, separate from Columbus Day,

SGA President Katherine Swanson said she was proud that the bill passed.

“It’s certainly not going to change our university calendar immediately, but it can help us work toward making that change by showing that the SGA supports this,” said Swanson, a senior government and politics major.

If the administration heeds the resolution, this university would join other colleges, cities and states that celebrate some variation of Indigenous Peoples’ Day rather than Columbus Day, including Brown University; Berkeley, California; Denver, Colorado; Phoenix, Arizona; and the states of Vermont and South Dakota.