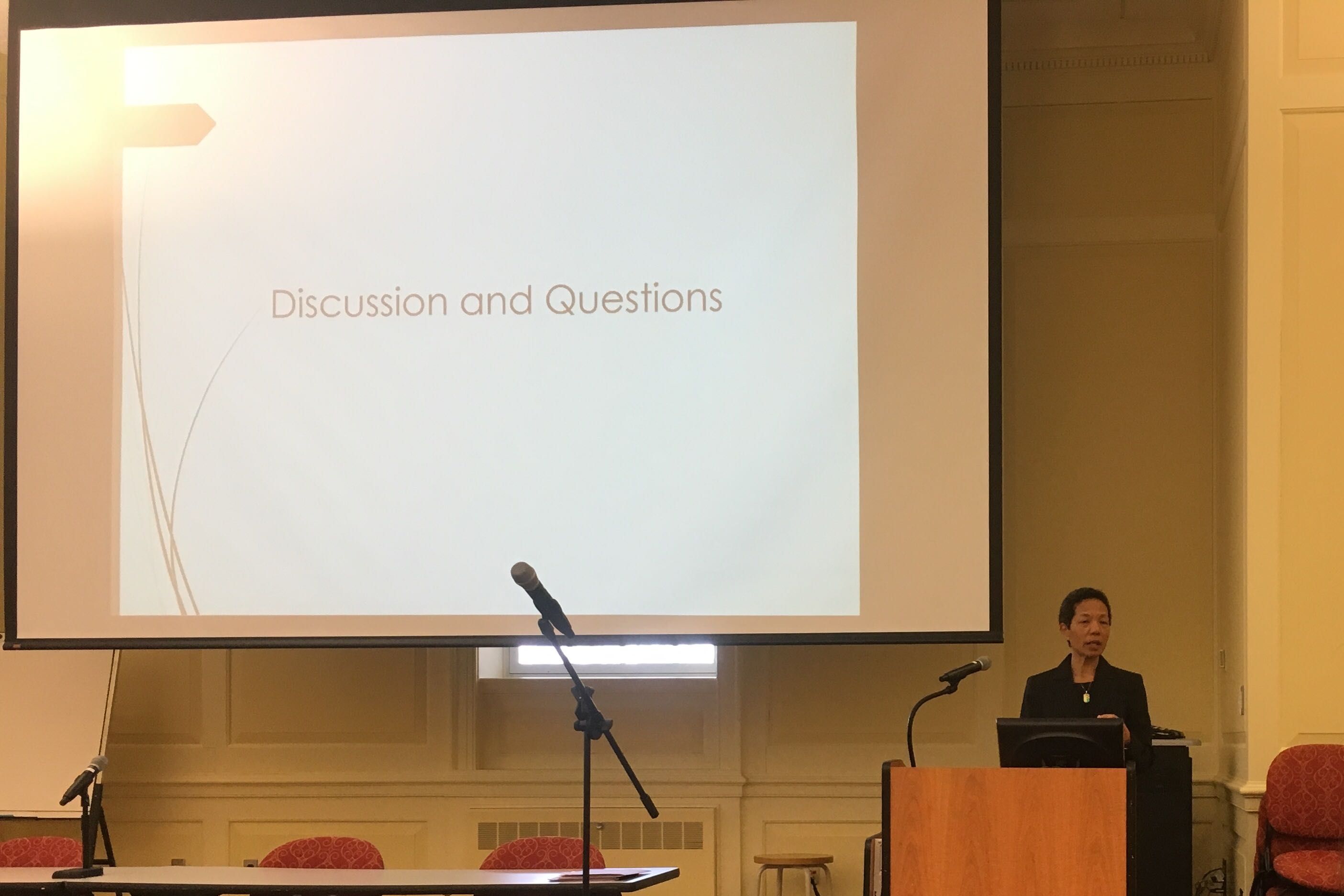 Vice President of Diversity and Inclusion finalist Georgina Dodge presents to a a crowd of about 50 people in McKeldin Library on March 5, 2019. (Angela Roberts/For The Diamondback)

Georgina Dodge, the chief diversity officer at Bucknell University, will take over as the University of Maryland’s first diversity and inclusion vice president in June, President Wallace Loh announced Monday.

In an email to the university community, Loh lauded Dodge — one of four candidates for the position — as a “tireless advocate for human rights, civil liberties, and equal opportunity.”

“She collaborates with all campus stakeholders to recruit and retain diverse faculty, students, and staff, support first-generation students and student veterans, and create a more welcoming campus climate,” the email read.

The university has had two chief diversity officers — Kumea Shorter-Gooden and Roger Worthington — since the position’s inception in 2012, but Dodge will be the first to hold the position since its elevation to the level of vice president. This move was one of several reforms the university undertook after Richard Collins, a black Bowie State student, was stabbed on the campus in May 2017.

Dodge will replace Worthington, who stepped down over the summer. Shortly thereafter, he criticized university officials, saying that he felt unsupported and restrained in the role.

“Unless I get the kind of real backing to do this work, I can’t be effective as a leader in this role,” he said. “I’m a better, more effective member of the community as a full professor with a full voice where I can come forward and work together with you without [The Office of] Strategic Communications saying, ‘Here is what you can say and here is what you can’t say as an administrator.’”

Cynthia Edmunds, formerly a staff ombuds officer, has held the position on an interim basis since Worthington’s resignation, and she will continue to do so until Dodge takes over. Edmunds also served as interim CDO after Shorter-Gooden stepped down in January 2017.

Sean Urbanski, a white former student of this university, is set to stand trial on murder and hate crime charges in Collins’ death. In the months prior, a noose was hung in a campus fraternity house. University officials conducted an investigation into the incident, but never disclosed its outcome.

This academic year, university community members have reported 22 hate bias incidents. The most recent included a swastika etched onto a bathroom stall.

At an open forum earlier this month, Dodge told attendees she’d look to enhance students’ sense of belonging and beef up fundraising efforts to provide more financial aid to students.

She told the story, too, of how she addressed racial tensions during her time as chief diversity officer at the University of Iowa. After an artist visiting the campus erected an effigy of a Klansman, intending to express solidarity with the black community, she rushed from a meeting to meet with students who felt threatened by the display and had gathered outside the president’s office.

During her time at Iowa, Dodge also oversaw its Title IX office. At Bucknell, she’s worked as an English professor and led offices for civic engagement, accessibility resources and African studies, among others.

The campus community will be invited to a welcome reception once Dodge arrives, Loh wrote.