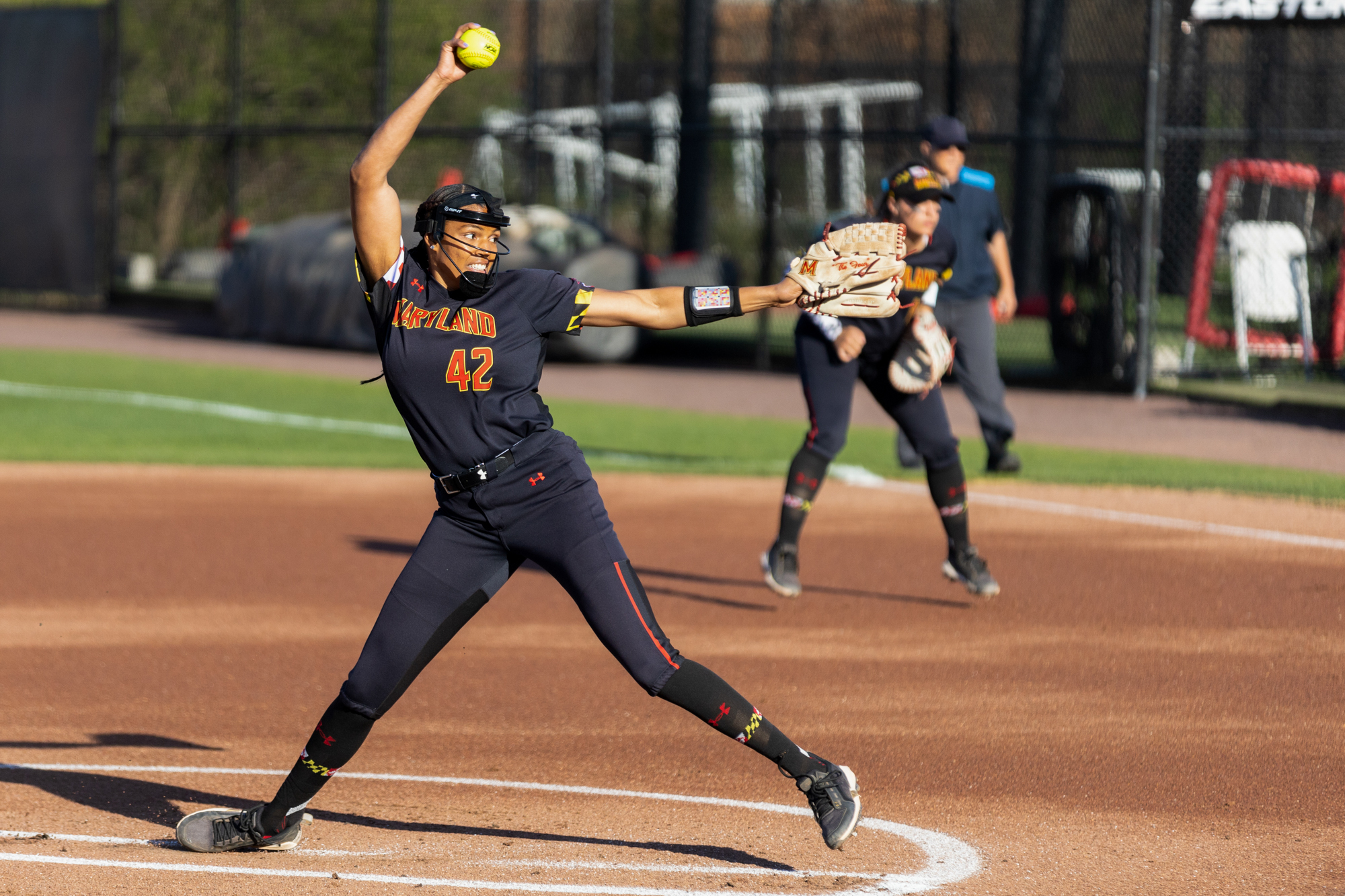 Courtney Wyche was dominant from the very start of Saturday’s game against Michigan State.

Wyche sat down the Spartans’ first four batters with strikeouts and kept it rolling entering the late stages of the contest. Entering the sixth inning, Wyche had a perfect game — 15 up, 15 down.

After a leadoff groundout, Wyche allowed a single off the bat of Kendall Kates for the Spartans’ first base runner of the afternoon. The East Lansing crowd sounded the loudest cheer of the game, but Wyche quickly reset in the circle.

Wyche got the final two outs of the sixth without a hitch and cruised through the seventh, securing the 8-0 victory over the Spartans.

After throwing just over four shutout innings in relief during Friday’s series opener, Faith Guidry made just her seventh start of the season in game two of the series for the Spartans.

Wyche got the nod for the Terps, the first time she appeared in the circle since being named co-pitcher of the week in the Big Ten.

Wyche started off red hot, striking out each of her first three batters faced.

Maryland scored the first run of the game in the second thanks to control issues from Guidry in the circle.

After retiring the first two Terps of the inning, Guidry allowed back-to-back singles to Campbell Kline and Michaela Jones. Guidry followed by hitting Ruby Butler on a 1-2 pitch, loading the bases for Kiley Goff.

On a 2-2 count, Goff got hit by a pitch on her left knee. Goff took off her pads and trotted over to first base, but not before she high-fived Kline on her way home from third to give Maryland a 1-0 lead.

Jaeda McFarland led off the top of the third with a single through the 5-6 hole, marking the end of Guidry’s afternoon in the circle. Ashley Miller — game one’s starter — entered in relief of Guidry.

McFarland scored on a shot into the gap off the bat of Taylor Okada.

On the first pitch of her at-bat, Okada lined one over the head of Courtney Callahan in left. Okada’s shot rolled to the wall, allowing McFarland to cross home easily. Okada raced around second and slid in safely at third with an RBI triple, extending the Terps’ lead to 2-0.

In the fourth, the Terps strung together a two-out rally to double their lead.

Michaela Jones led off the inning with a double to left center, but remained on second with two outs following back-to-back strikeouts.

Megan Mikami lined a shot on the first pitch of the at-bat past the infield that rolled to the outfield wall. Jones scored from second, and Mikami slid into third just ahead of the tag for an RBI triple. Mikami scored on a single into right off the bat of McFarland, putting Maryland ahead 4-0.

Wyche struck out the side in the bottom half of the inning, giving her eight strikeouts in four perfect innings.

With one out in the fifth inning and Kamryn Davis on base in scoring position, Okada grounded a ball to Catie Ladd near the second base bag. Ladd’s throw to first was wide right, allowing Okada to reach base safely on the error and Davis to score the Terps’ fifth run of the game.

After allowing a leadoff walk to Butler in the sixth, Miller was relieved by Ashley Martin — making just her sixth appearance of the season.

Not only did Martin allow the inherited runner to score, but she also was charged a run of her own. Following a walk and a groundout, McFarland hit a rocket up the middle that rolled to the wall. She trotted to second without a throw, and Butler and Goff scored standing up to extend Maryland’s lead to seven.

In the bottom of the sixth, Kendall Kates lined a single into left field — ending Wyche’s perfect game.

Maryland added a run to its large lead in the seventh.

A hit-by-pitch and two singles loaded the bases for Goff. Goff chopped one off the glove of Alexis Barroso, bringing home Kline to give the Terps an 8-0 lead.

Wyche allowed another baserunner on an error in the seventh but refocused to get through the inning. Wyche’s shutout complete game clinched the series victory for the Terps.