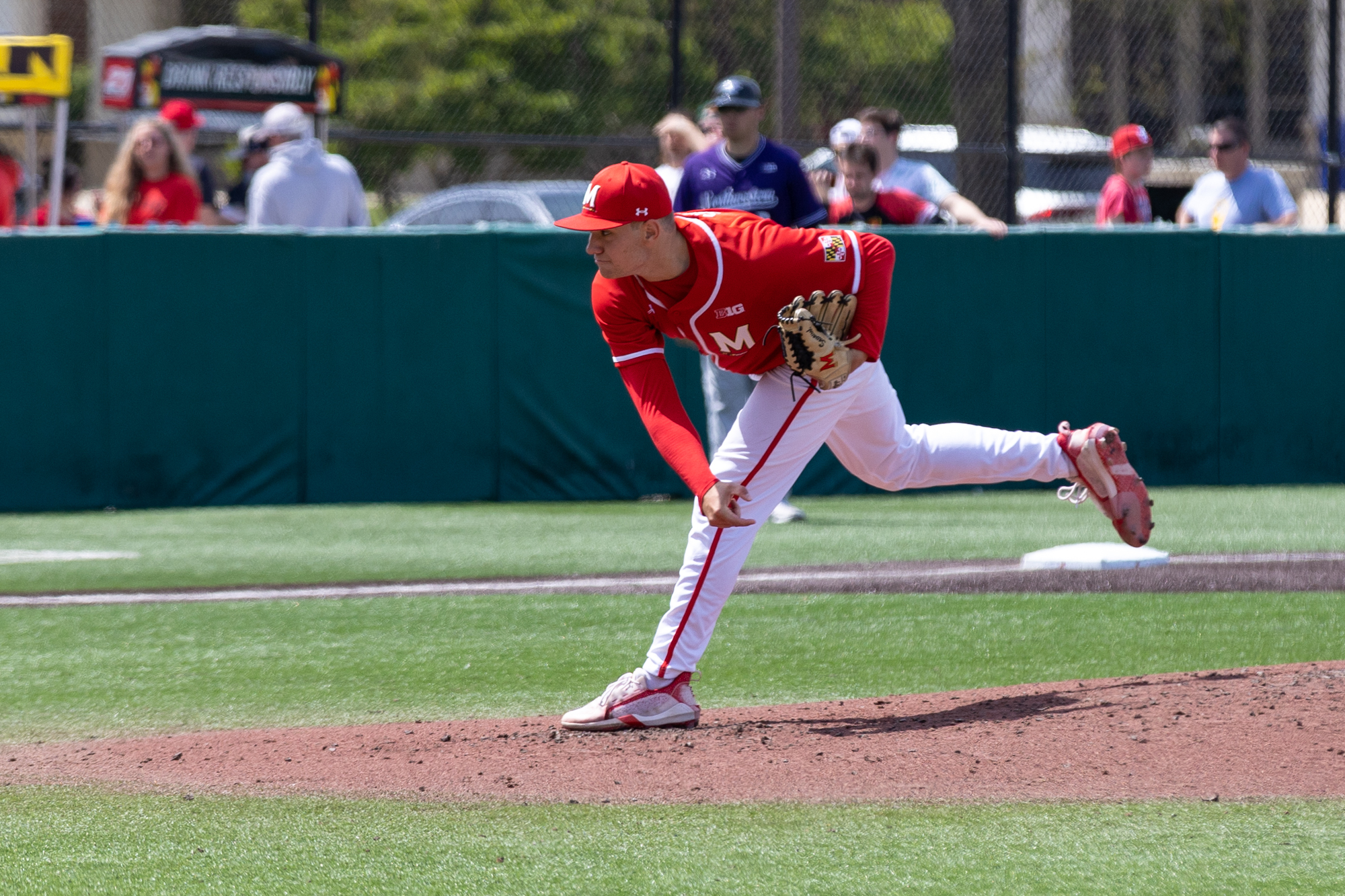 Sean Heine only needed one out to keep the game tied.

In a tie game, Heine had come on in relief of Dave Falco after an ugly appearance by the latter. But Heine allowed his first three batters to land on-base before plunking the next two, dealing pain to the Wildcats.

The two relief pitchers collectively unraveled in the eighth inning, wasting an outstanding outing from Jason Savacool. Before Heine’s disastrous sequence, Falco loaded the bases after recording just one out before the Wildcats tied the game on a sacrifice fly.

The collapse came unexpectedly as Maryland’s bullpen had an additional day of rest with no relievers coming on Friday.

“We just have to do a better job of minimizing in the eighth,” coach Rob Vaughn said. “You give up the lead, that’s fine. But we can’t give them four freebies.”

The Terps attempted a late rally, with back-to-back home runs clobbered by Lorusso and Shaw, but their lineup couldn’t manage the tie with runners later gracing second and third. They faltered, 7-4, to Northwestern in Saturday’s home matinee.

It would have been near-impossible for Savacool and Maryland to follow up Ryan Ramsey’s perfect game on Friday night. But through the early innings, Savacool and his defense remained effective against Northwestern.

“Savacool was phenomenal through seven [innings],” Vaughn said. “I thought offensively, it wasn’t that we were bad, their guy did a nice job and we couldn’t make adjustments.”

The sophomore pounded the strike zone and stifled the Wildcats to the tune of nine punch-outs on the day. But Maryland’s offense wouldn’t reciprocate his performance.

Outside of a Nick Lorusso RBI double that rolled to the left-field wall and scored Chris Alleyne, the Terps fell flat against Northwestern pitcher Michael Farinelli.

“[Farinelli] just did a good job of locating [pitches],” Lorusso said. “He had us off-balance a little bit with the slider but all-in-all we just had to put together better at-bats and we didn’t do that today.”

Maryland looked to change that in the fourth inning as it loaded the bases with a pair of walks and a hit-by-pitch. But with two outs, Kevin Keister struck out on five pitches to strand all three runners and lose out on a massive opportunity to take control of the game with Savacool still dealing.

“In the fourth, they gave us three freebies [and] we don’t score. In the eighth we give them four freebies and they hang a five spot,” Vaughn said. “That’s kinda the difference.”

After the Terps’ failed attempt to take a decisive lead, Northwestern fought back with a pair of hits in the fifth to land runners on second and third with two outs.

It was up to Keister again.

The second-baseman fielded, then bobbled, a grounder his way before launching one to first. Costes gathered it just in time to prevent the run. Northwestern responded in the next inning by turning a double-play that stranded Alleyne on third base.

The task went awry quickly, as the Wildcats’ five-run eight-inning was followed by a two-run ninth inning that spoiled Savacool’s stellar start and stifled Maryland’s shot at clinching the series.

“Our starting pitching continues to be really good,” Vaughn said. “Those guys continue to do a great job, we just needed to give [Savacool] more of a cushion. That’s a game Jason Savacool deserves to win.”