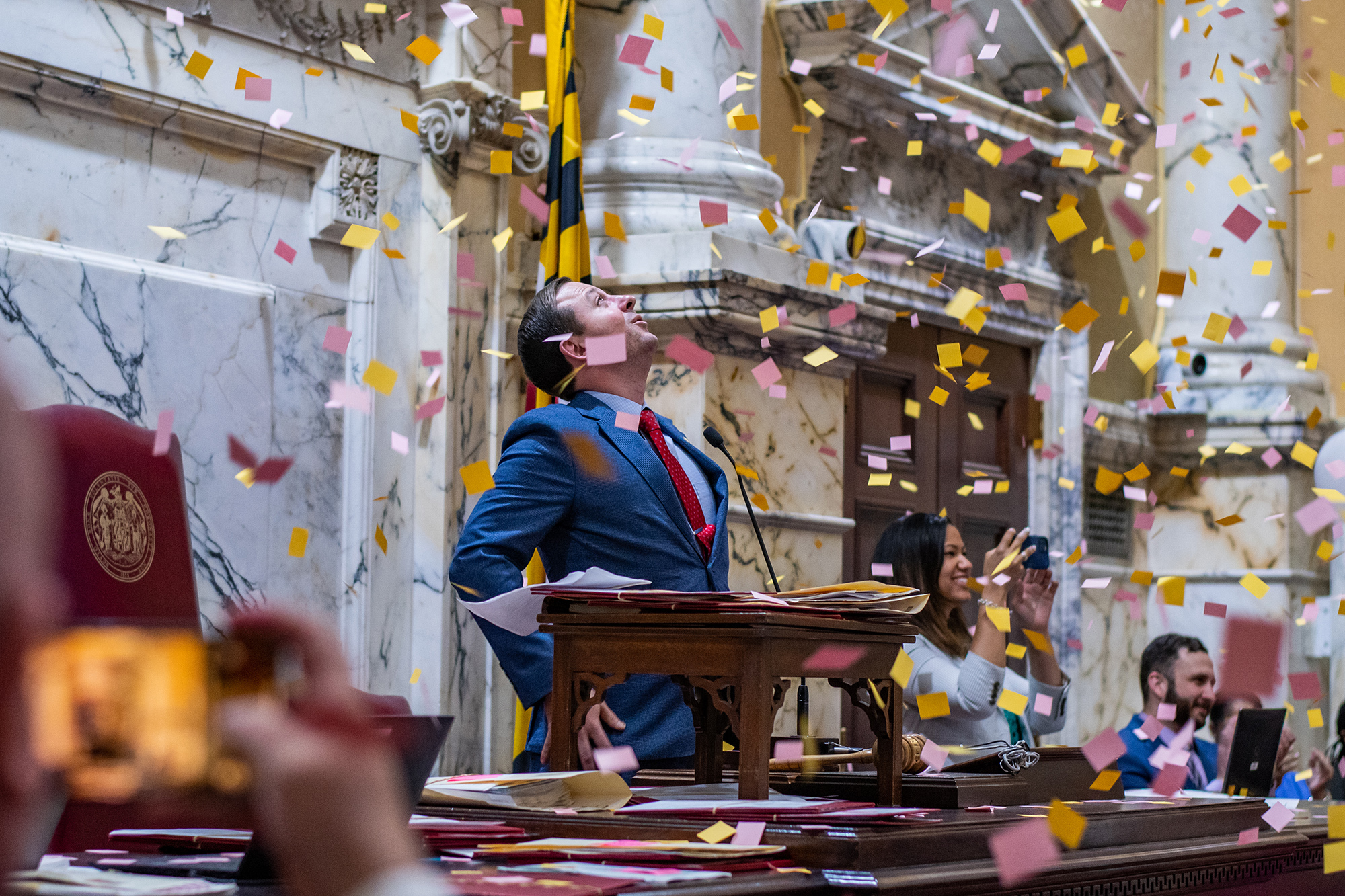 The Maryland General Assembly adjourned its 2022 legislative session Monday evening, with many of its biggest legislative priorities headed for implementation and a long-awaited midnight celebration of the legislature’s work.

Monday was the first session closure in four years that featured an end-of-session celebration in Annapolis. The General Assembly’s traditional midnight drop of balloons and confetti was back on full display after being absent from both chambers since 2018.

“For the first time in two years, we’ve ended the session celebrating the work we’ve done for the people of Maryland,” House Speaker Adrienne Jones said in a tweet after both chambers adjourned Sine Die early Monday morning — a legislative term that means “indefinite adjournment”.

Republican Gov. Larry Hogan said in a news conference Monday afternoon that he believes this was the best legislative session of his eight years in office. Monday marked the closure of the second-term governor’s final legislative session.

“We were successful in accomplishing nearly everything that we wanted to accomplish,” Hogan said.

One of the bills that received final passage in the waning hours of the 2022 session was a measure to improve Maryland’s cybersecurity. Another bill — sponsored by Del. Sara N. Love (D-Montgomery) — would ban the use of chemical PFAS, which are often found in everyday products like food packaging and carpets. Exposure to the chemical has been linked to a half dozen negative health effects.

Some of the measures left behind this session were part of a wide-reaching proposal from Hogan to tackle crime across the state. Lawmakers did not pass a Hogan proposal to increase penalties for repeat violent offenders, which the governor characterized as the “most important” element of his outlined crime package on Monday.

The final bill to pass both bodies on Monday night was a slight iteration of Hogan’s long-proposed “Judicial Transparency Act.” The bill would require the Maryland State Commission on Criminal Sentencing Policy to collect and publish data related to cases prosecuted in state circuit courts.

Monday marked a closure to this legislative session that saw many of the General Assembly’s top priorities already passed — including measures to combat climate change, cut taxes and let voters decide whether to legalize marijuana in the state this fall.

“The vast majority of the top issues that we had have already crossed the finish line,”Senate President Bill Ferguson said in a news conference Monday. “We’re really kind of closing things down.”

On Friday, the governor vetoed 10 bills that had passed through the General Assembly — including legislative wins for Democrats such as a bill to expand abortion access in the state and one that would create a 12-week paid family and medical leave program for all Marylanders.

Lawmakers convened for a Saturday session to override measures Hogan had vetoed with the power of a Democratic supermajority in both legislative chambers — which is a majority that has a higher threshold than one half.

The General Assembly overrode a Hogan veto of the Abortion Care Access Act, which would expand who can perform abortions in the state and provide $3.5 million in state funding to train health care professionals in reproductive care.

Lawmakers also overrode Hogan’s veto of a statewide paid family and medical leave program. The program would offer Marylanders 12 weeks of partially paid leave each year to care for themselves or a loved one and up to 24 weeks of paid leave for new parents.

A ban on the sale and possession of ghost guns — unserialized and untraceable guns that can be bought online and assembled at home — will also be implemented this year without the governor’s signature.

All 188 legislative seats are up for election this November. Monday was lawmakers’ last chance to pass key legislation before taking to their campaigns for the rest of the year or stepping down from office.

More than 20 lawmakers are retiring or leaving to run for other offices, according to Maryland Matters. And as July’s statewide primary elections loom, many who are running for reelection are still awaiting the outcome of a redistricting trial that could throw out the state’s legislative map.