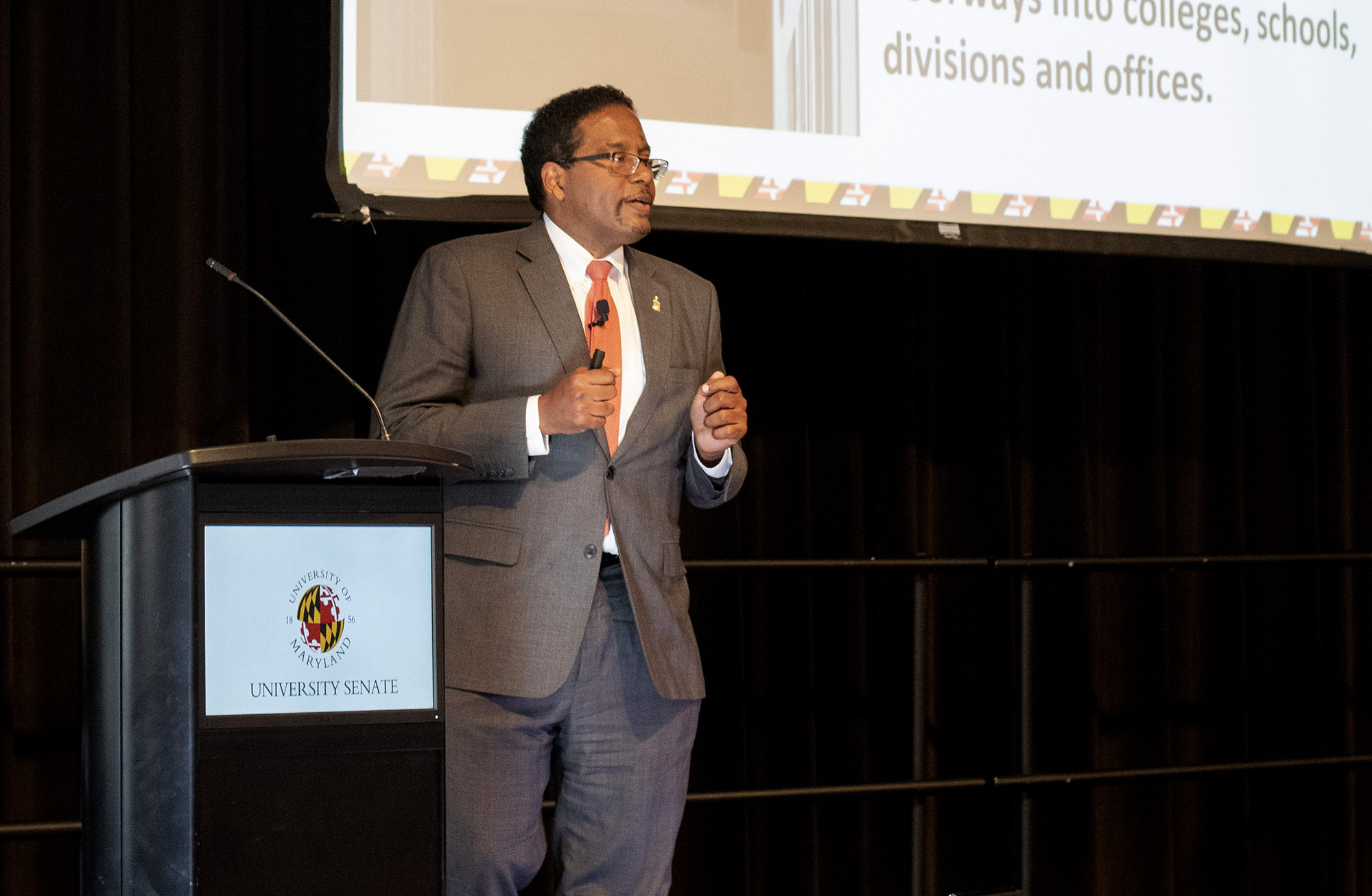 President Darryll Pines gives his State of the Campus address at the University Senate meeting in the Colony Ballroom of Stamp Student Union on March 1, 2022. (Daryl Perry/The Diamondback)

The University Senate at the University of Maryland passed changes in the diversity general education requirements, with positive reactions from university students and faculty.

The measure passed during the March 1 meeting with 99 members voting in favor, eight opposed and eight abstaining. University President Darryll Pines signed the proposal the next day.

“We believe these changes will have a powerful impact on our campus community by inspiring meaningful, nuanced discussions about challenging subjects,” Pines said in a March 30 email announcing the changes.

The new changes were created by the Diversity Education Task Force, which was formed in 2018 after the murder of 1st Lt. Richard Collins III. its goal was to find ways to incorporate more themes of diversity and inclusion through the general education requirement and “other educational initiatives,” according to the senate proposal.

The task force recommended the university rename the Understanding Plural Societies category to Understanding Structures of Racism and Inequality. The category would include a required learning outcome based on systematic racism.They also recommended that the Cultural Competence category be renamed “Navigating Diverse Social Environments.” Teachers for those courses would be able to select at least one learning outcome — what a student knows at the end of the course, according to the institutional research, planning, and assessment office — from a larger set.

[How language instructors are creating a gender-inclusive Hebrew]

The task force recommended students be required to take one course in each diversity category –– theory and practice-oriented –– to fulfill the requirement, according to the senate proposal. Previously, students could take two theory classes to satisfy the requirement.

The task force additionally recommended classes count for both the theory and practice-oriented categories if they fit the requirement. Faculty members will still have some discretion on what and how to teach, said government and politics professor and member of the task force Janelle Wong.

“I think it’ll be an interesting way to kind of get people to think a little bit more deeply right when we talk about the theory,” Shane Bolles Walsh, a lecturer in the African American studies department, said of the changes.

Walsh said learning about racial diversity is one thing, but learning how someone’s lived experiences contributes to an understanding of racism beyond what “has already been the precedent” at this university.

One of the tenets of the changes was explicit attention to racism, though it’s not the only topic regarding diversity students can learn about, Wong said.

“I think students really wanted to create a requirement where students would have the opportunity to delve more deeply into the institutional and social drivers of horrific incidents,” Wong said.

M Pease, a senior psychology major and a senator for the behavioral and social sciences college, emphasized the community-driven origin of these recommendations.

“Students are collaborators in discovering and shaping what their educational experience looks like,” Pease said.

Pease said they hope the changes will be a first step in contributing to a greater understanding of racism on this campus.

Students and faculty emphasized the importance of intersectional thinking, both in new coursework and moving forward as a whole.

“I think a change I’d hope would come out of it are opportunities for students to expand their worldview,” said senior psychology major Karoline Trovato. “My hope would be that this change in a gen ed modification can create sort of a ripple effect of students engaging in self reflective practices individually, but then being able to come together in an institution and do that as well.”.

Walsh said on top of these changes, there should be further improvements — like strengthening the “Terrapin Strong” program to mention a more specific history of racism at this university.

“It’s a good thing that could be very much improved upon but it’s a good step in the right direction,” said Walsh.