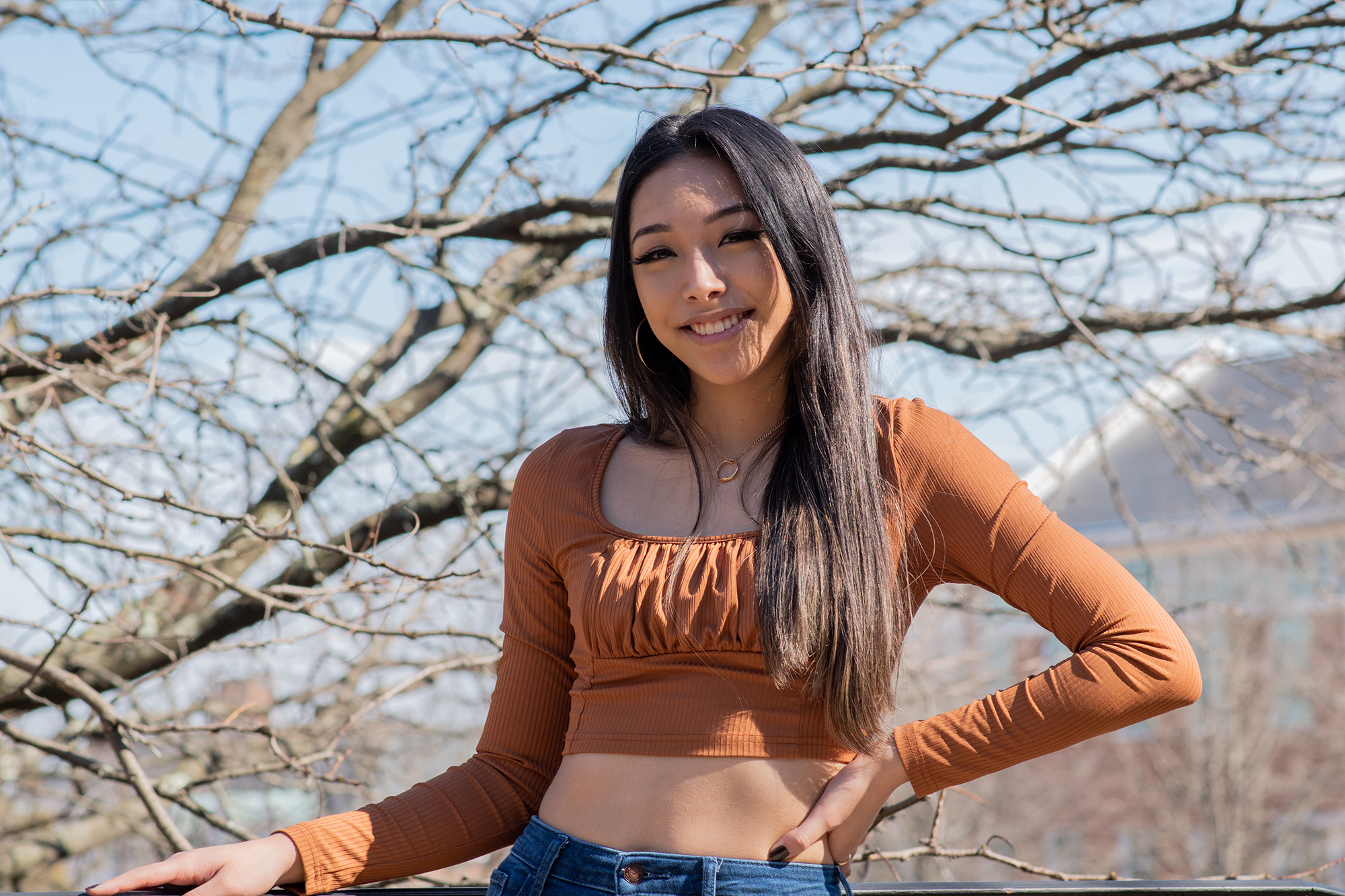 Reese Artero, the creator of the Refillery, poses for a portrait on Mar. 15, 2022. Artero decided to start the project to help develop more sustainable initiatives on campus and to encourage UMD to decrease its carbon footprint. (Autumn Hengen/The Diamondback)

A new student-run project at the University of Maryland will offer spaces on the campus for students to bring their own containers and get sustainable products in an attempt to reduce the university’s carbon footprint.

Freshman criminology and criminal justice major Reese Artero started the project to offer products such as shampoo, conditioner and body wash for students at different campus locations. She said the pilot program will start in April.

Artero and others on the team will use the pilot program to survey what students want from a refillery, to ensure people will actually use what they put out. She said they want to know if students want scented products, vegan options, or if there are things they find important that haven’t been considered yet.

She has plans for students to get refills on the different products for no cost. She won’t know if the pilot will be funded by grants until April, but is currently considering paying for it herself and trying to get donations.

Currently, she hopes there will be a space for the Refillery at the North Campus Dining Hall. She said she’d like another space in the UMD Campus Pantry geared toward students with kitchens, who will need more products than just shampoo, conditioner and body wash.

Scott Cronin, a sophomore government and politics major and president of the RHA, said necessities such as shampoo, conditioner and body wash can be expensive and can create a lot of waste.

When Artero introduced the project to him, he thought the idea of the Refillery was fantastic. Cronin said students would probably pay per ounce for what they need, and don’t need to buy more than necessary.

“I think there are very few limits on this,” said Cronin. “As a community, we’re trying to move towards affordability and sustainability in every avenue possible.”

Cronin said students need to be educated and informed on issues so solutions like the Refillery can get effective feedback from the university community.

“The more people you have behind it, the easier it’s going to be to implement it,” Artero said.

Artero introduced the project on Instagram to begin reaching out to students without going outside and tabling or paying to make posters for advertising.

“A lot of it just has to do with telling people how this product could be better … or how this way of life might be better in terms of yourself and future generations,” she said.

When it comes to environmental sustainability, Artero said people need to be educated now on the topic because of issues such as climate change that will affect future generations

Artero is starting with sustainability initiatives on the campus, such as reducing the use of plastic bags and other single-use plastics. She’d like to see the campus convenience stores offer bamboo or wood utensils that are more environmentally friendly than the single-use plastics they currently have, which she said have terrible ingredients in them.

“What college student is looking at ingredients when they’re just worried about which one they can afford?” she said.

Lisa Alexander, the Department of Resident Life sustainability coordinator, said Artero has done a lot of research for her ideas regarding the Refillery. Alexander said some of the research included seeing where other Refilleries have been successful.

Allison Tjaden, assistant director for Dining Services, said she loves working with students to see their projects through. She said Artero met with her to share the project idea and to learn about Tjaden’s experience with coordinating projects.

She said projects started by students often have the best potential for impact on campus, such as the Food Recovery Network, which was a student idea at this university and is now nationwide.