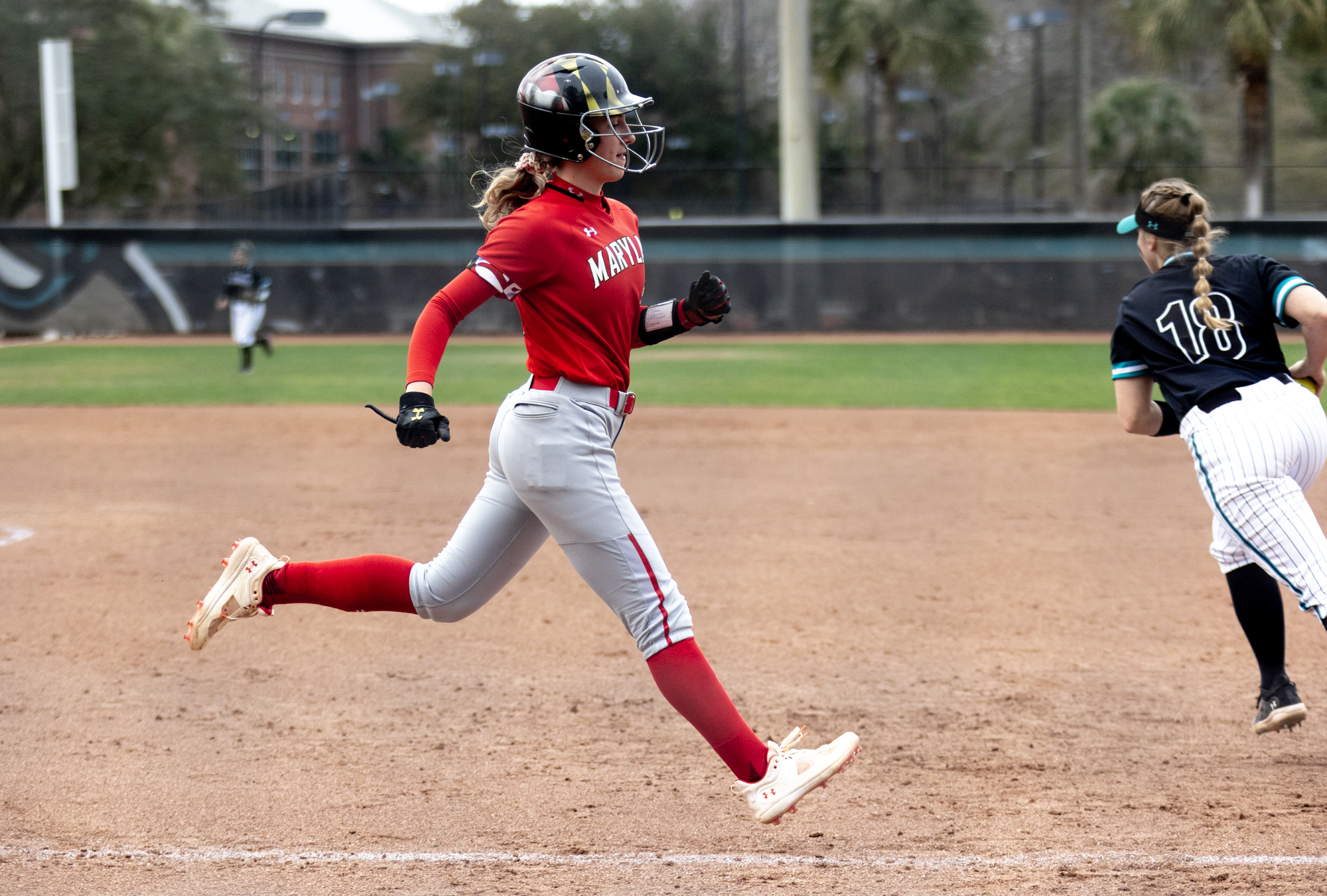 Michaela Jones runs to first base during Maryland softball's 5-2 win over Coastal Carolina on Feb. 26, 2022. (Julia Nikhinson/ The Diamondback)

Maryland softball already had a significant 6-2 advantage in the sixth inning of its matchup with James Madison. But the Terps weren’t done scoring.

With two runs already scored in the inning, Taylor Liguori stepped up to bat looking to bring home a third.

Liguori did just that — she lined a single up the middle, scoring Mackense Greico from third. Maryland’s lead grew to 9-2 and it lifted the game out of the Dukes’ reach.

Maryland split its Friday doubleheader. The Terps fell to No. 10 Arkansas, 6-0, before downing James Madison, 12-5.

After only two batters of the game, Arkansas led 1-0.

KB Sides led off the game with a walk and quickly found her way 60 feet from home plate. Sides stole second and advanced to third on an error by Ruby Butler at shortstop. Hannah McEwen flied out to left field, scoring Sides from third.

The Razorbacks weren’t done scoring in the first.

With two on and two out, Linnie Malkin stepped up to the plate. Malkin lined a double down the right field line, scoring both runners on base.

Taylor Ellsworth led off the inning with a double to right center and advanced to third on a groundout. That brought Hannah Gammill into the batter’s box — and she made contact in a big way. Gammill crushed a two-run homer to give the Razorbacks a 5-0 lead.

In the top of the fifth frame, Gammill added on to Arkansas’ advantage.

On a 3-1 count, Gammill launched a solo home run for her second round-tripper of the game. The Razorbacks’ lead was extended by a run, 6-0.

Neither side scored the final two innings and Arkansas coasted to a comfortable victory.

Mary Haff threw a perfect game for the Razorbacks. Haff shutdown all 21 batters faced, striking out 14 in the process — 10 different Terps struck out against Haff.

[Maryland softball battled with inconsistencies at the Queen City Classic]

Megan Mikami doubled with one out and Ligouri walked with two outs. Taylor Okada lined a two-strike single down the right field line, scoring Mikami for Maryland’s first run of the day.

A wild pitch put Liguori at third and Okada at second for Michaela Jones. And Jones took advantage.

She singled to right, scoring Liguori. An error by Reed Butler in right field allowed Okada to score from second to put Maryland ahead, 3-0, in the first frame.

The Terps added to their lead in the next inning.

With two outs in the second, Greico stepped up to the plate with Kiley Goff at third and Mikami at first.

Coach Mark Montgomery put on a double steal — and his call worked out to perfection.

After the first pitch of Greico’s at-bat, the Dukes’ catcher, Emily Phillips, fired to second with Mikami in motion. The ball was cut off and Goff crossed home plate before the throw back to home. Mikami was safe at second to put a runner back in scoring position.

Greico added on to the Terps’ lead herself, as she singled to center to score Mikami.

James Madison plated its first run of the game in the third frame.

Hallie Hall came up to bat with runners on the corners and two outs in the inning. Hall singled through the left side, bringing home Jasmine Hall from third. The Dukes still trailed, 5-1, entering the fourth inning.

In the top of the fifth, Maryland increased its lead thanks to a two-out rally.

After the first two batters grounded out, Liguori walked and Kamryn Davis replaced her as a pinch runner. Okada stepped up to bat and walked, putting two on base. Jones proceeded with a bloop single into right, scoring Davis for the Terps’ sixth run of the game.

[Maryland softball blown out by Virginia, 10-2]

The Dukes responded with a run of their own in the bottom half of the fifth.

Jasmine Hall led off the inning with a single, and back-to-back groundouts left her at second base with two outs in the inning.

Hallie Hall entered the batter’s box and blooped the ball in between left and short, allowing Jasmine Hall to score. Hallie Hall attempted to extend her single into a double but got caught in a rundown. Hall was tagged out, ending the fifth with James Madison down by four.

Maryland added a few runs to its lead in the sixth.

Campbell Kline led off the inning with a walk. A few batters later, Mikami was hit by a pitch, putting two runners on with two outs.

A misplay behind the dish put Kline and Mikami on the move. The throw to third was up the line, allowing Kline to score and Mikami to advance to third.

Greico followed with a walk to put runners on the corners. Montgomery put on another double steal, and like the first time, it worked.

Greico was safe at second and Mikami stole home for Maryland’s eighth run of the game. Liguori followed with an RBI single to grow the Terps’ lead to seven.

James Madison responded with two runs in the bottom of the sixth off the bat of Lauren Bernett.

Bernett crushed a two out, two-run bomb to straightaway center, doubling the Dukes’ scoring total from two to four.

Goff grounded off the glove of Hallie Hall at third and the ball ricocheted into the outfield to allow Butler to score. The throw to Hall deflected off the top of her glove, bringing Kline home.

Merissa Borkowski came up to bat next and lined one over the head of Isabelle Fishman in center fieldas Fishman misplayed the ball. Goff scored, and the Terps went up even further, 12-4.

In the bottom of the seventh, Trinity Schlotterbeck loaded the bases and the Dukes scored another run.

Fishman struck out swinging for the second out, but the ball got by Goff behind the plate allowing all runners to advance. Kylie Thress crossed home plate for James Madison’s fifth run of the game.

Schlotterbeck finished the inning herself and secured the victory for the Terps.