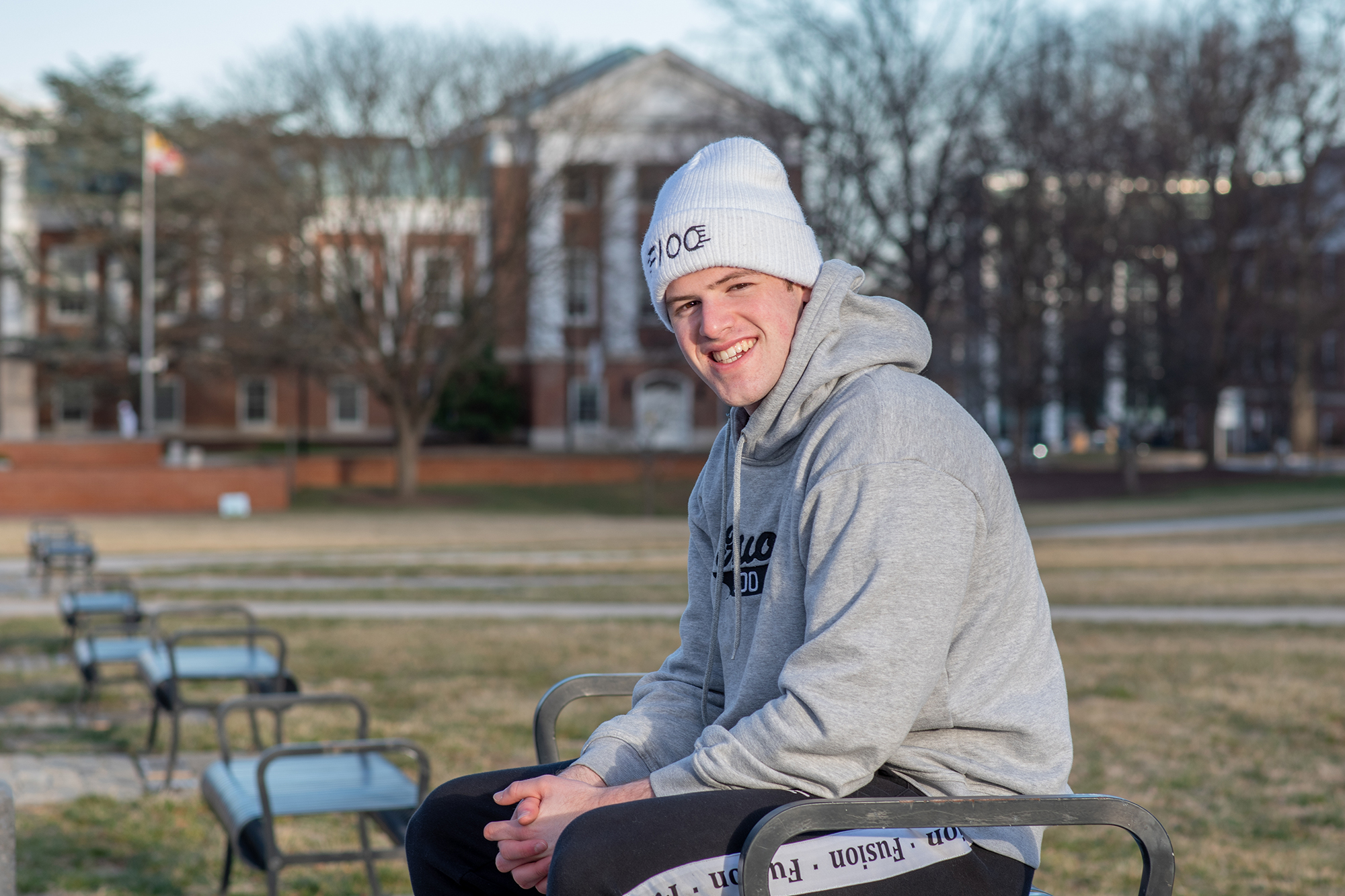 Ilan Orgel, a current senior at the University of Maryland and the founder of Fusion100, poses for a portrait on McKeldin Mall on March 3, 2022. Orgel created the lifestyle brand with the hopes to encourage others to strive to be their best selves. (Autumn Hengen/The Diamondback).

Ilan Orgel has always had an entrepreneurial knack.

He was really into sneakers when he grew up in Manhattan. He would wait overnight outside stores in the city, buy a lot of shoes and then resell them at a profit.

“I was always looking to flip shoes — buy them, resell them at a higher value,” he said.

Now, Orgel is a senior finance major at the University of Maryland with his own fashion company: Fusion100.

The streetwear brand name comes from the idea of giving 100 percent in everything you do and inspiring people to become the best version of themselves, Orgel said. The company has 200,000 followers on Instagram and about 250 products on its website.

When Orgel first started his company in summer 2019, his close friends would buy the products, and Orgel would reinvest the money. Eventually, his customer base expanded to all over the United States.

Now, Orgel globally ships products. He’s also worked with athletes and players in the NBA, such as the Miami Heat’s Dewayne Dedmon and the Sacramento Kings’ Justin Holiday.

Orgel said he got in touch with professional athletes through Instagram direct messaging. He’d send out a ton of messages to various athletes and only a few would respond, Orgel said. But he kept at it.

“It’s been a really cool experience,” Orgel said. “I work on it every single day. There’s a lot to it, and I’m very passionate about it.”

As the brand grew, he was able to connect more with different players. Orgel would ask the athletes to help spread the word and get their teammates to wear his clothing as well.

Orgel said he works with a few designers to create mockups of various clothing items. He’ll draw out a sketch, the designer will make it and then he’ll put a story on Instagram to gauge customer interest.

“I like to test it out before I really release it, so if the customer base likes it and wants to see it made, then I usually make it,” he said. “A lot of it depends on the customer base and what they want to see.”

Jazmine Duque, a designer for Fusion100, has been working with Orgel for almost two years. She said one of her classmates was a brand ambassador for Fusion100 and told her the company was looking for an artist.

She messaged the account on Instagram, and after a trial period, the sophomore marine biology major at California State University, Long Beach, was accepted as a clothing designer.

“It’s crazy to believe that the drawings that I make turn out to be real clothing products that people wear,” Duque said.

Sometimes Orgel offers Duque ideas that he wants her to illustrate. Other times, she’ll propose her own ideas for a design.

Duque typically communicates with Orgel through Instagram. Since they’re both busy students, it can sometimes be challenging to get ideas straight, she said.

“If communication is really good, we can get [a design] done in a couple of days,” Duque said. “If we’re unable to talk to each other back and forth, it might take more than a couple of days. It might be to a week or so.”

James Horodecki is a Fusion100 brand ambassador. He first got involved in the company when he posted a video of him skateboarding on Instagram.

Orgel sent him a direct message, asking him if he would be interested in being a brand ambassador for Fusion100. Horodecki looked into the company and liked the style of clothing, and they’ve been working together ever since.

Horodecki said that while other companies have reached out to him about collaborating, Fusion100 is the only one he’s wanted to work with.

“I actually really like their clothing,” he said. “I like the style, it’s something new every time, and I like how they work with their ambassadors.”

Based in Long Island, New York, Horodecki has a podcast with his friend where they interview different rappers and artists. He hopes to one day have a collaborative episode with Fusion100.

Through the partnership, Horodecki and Fusion100 are able to reach wider audiences.

“I get the clothes from them. I promote it, they promote me,” Horodecki said. “We both like mutual promotion.”