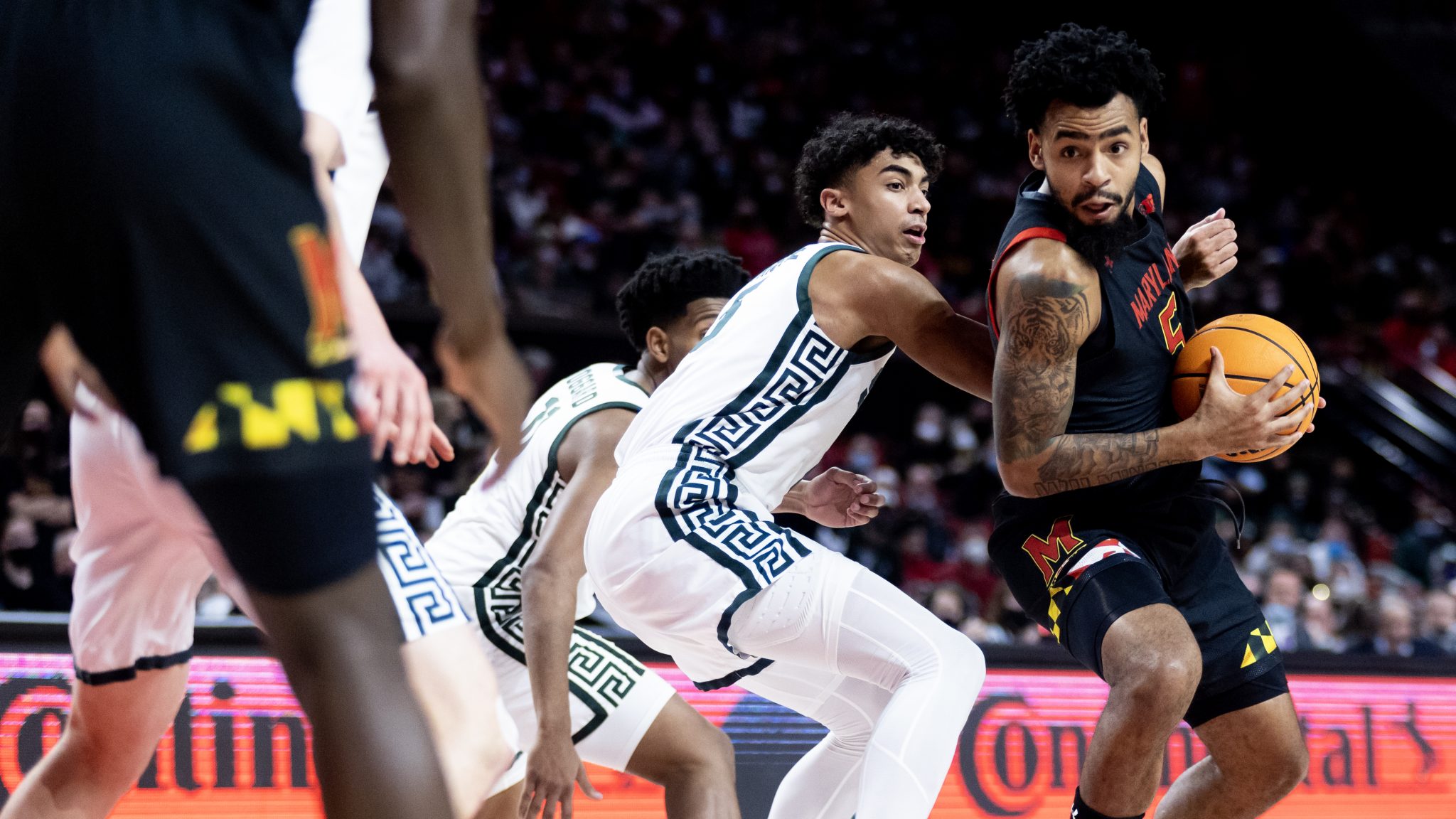 Eric Ayala attempts to drive past a defender during Maryland men's basketball's 65-63 loss to No. 13 Michigan State on Feb. 1, 2022. (Julia Nikhinson/TheDiamondback)

A tale of two halves doesn’t begin to describe the performance Maryland men’s basketball had in its regular season finale against Michigan State.

Although the Terps had their seeding in the Big Ten tournament locked in before tipoff, Maryland had a chance to keep its momentum going against a Spartans team to which it had lost by just two points earlier in the season.

The Terps looked lost in the opening half. But come the second period, they were as dynamic as they’ve been all year.

As Maryland continued puzzling onlookers at the end of its regular season schedule, the Terps missed out on a comeback win against Michigan State, 77-67.

“Anytime you… go down 18-1, it’s going to be tough to fight back in,” Fatts Russell said. “But I felt like we fought in the second half harder. We competed at a high level in the second half, but that has to be for the full 40 minutes.”

The loss took Maryland to 15-16 on the season, the first time the Terps have finished the regular season under .500 since the 1992-93 campaign.

Maryland had a tragic start. The Terps showed little ability to get to the basket and settled for looks or had the ball stripped away.

It took five minutes for Maryland to get its first point. And nine minutes to score its first basket from the field.

“We had opportunities,” interim head coach Danny Manning said. “Probably should’ve tried to drive the ball a little more. It’s also a fine line when you’re playing on the road, sometimes that is the best shot that you can get.”

Meanwhile, the Spartans had no trouble scoring. Marcus Bingham hit back-to-back threes as the Terps were kept along the perimeter in the opening minutes. A 14-0 lead was as far as Michigan State made it before Hakim Hart finally sank one of his two free throws.

Maryland toiled without a basket for a few minutes longer, starting 0-14 from the field, but Hart scored an easy lay-in from under the rim.

Scoring eventually revved up for the Terps, getting Fatts Russell and Qudus Wahab to the line. Julian Reese also found some impact baskets, first a putback followed by a physical drive from the top of the key.

His hard work saw Maryland nearly double its score, but his next shot attempt — a needless three-pointer — continued the Terps’ cold shooting from deep. It took 13 attempts from beyond the arc to finally sink one, courtesy of Russell.

It was Russell that finished out scoring in the final two minutes, with Maryland’s last seven points, that gave the Terps what little semblance of competitiveness they had to that point in the game.

Maryland was down a demoralizing 46-26 at the break. With only one half remaining in the regular season, the Terps needed a response.

For the first few minutes of the second period, they had one.

Eric Ayala hit two quick three-pointers to quadruple his game score in under a minute. His next attempt from the paint missed, but Wahab grabbed the rebound for a putback. A layup from Scott put the Terps on a 10-0 run.

But, it was time for Michigan State’s own 10-0 run. As quickly as a 20-point lead was erased it was set back in place. It could’ve been curtains for Maryland, but Ayala wasn’t having it.

The senior guard hit three from deep, including two from well beyond the arc. In just nine minutes, of play Ayala made five three-pointers, tied for his career-high in a game.
“I was just happy that he got into rhythm a little bit,” Russell said. He kept us in it.”


Russell began causing problems in the backcourt on the other end.

Three steals in the game allowed Russell to find his counterparts in transition for energy-boosting baskets. Alley-oops to Xavier Green and Hart followed by a successful trip to the charity stripe pulled the Terps within three.

“Defensively, [Fatts] always does a good job of trying to pressure the basketball and be disruptive to their offensive flow,” Manning said. He was really active, had great anticipation, great timing, got his hands on some balls and got in transition that gave us a chance to do some things to cut into that lead.”

After trailing by as many as 22 points, it seemed Maryland may pull back an unfathomable win.

However, Gabe Brown and Malik Hall were the ones to seal the game, scoring a combined 14 points in just under five minutes. The Terps weren’t able to go on another run and the Spartans earned the win.

Losing to Michigan State may not have changed where Maryland would sit on the conference tournament bracket, but it would set up its first opponent — the Spartans.

“I’m looking forward to it,” Manning said. “You play a team three times, you got a good feel for them.”