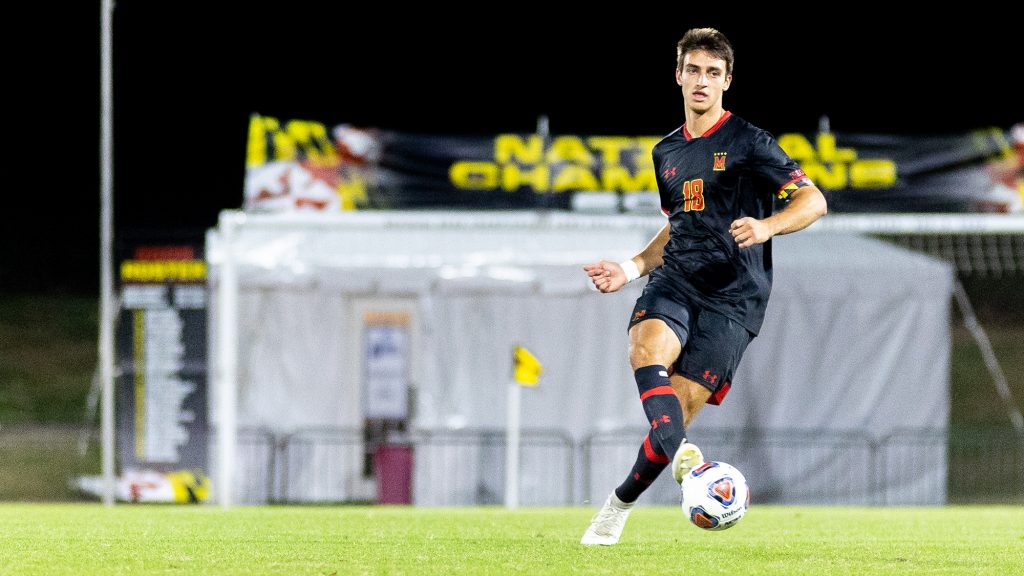 Chris Rindov passes the ball downfield during Maryland men's soccer's 1-0 loss to Long Island in the first round of the NCAA tournament on Nov. 18, 2021. (Julia Nikhinson/The Diamondback)

Colored plastic pieces ground against each other as they rotated quickly. The way it appeared, each colored piece looked hopelessly lost.

With his father narrating on a homemade YouTube video, Rindov led each colored piece back home.

The 2×2 block proved easy enough but had minor roadblocks.

“Oh, my God, I hate when this happens,” Rindov said, frustrated, before solving the cube a little over 20 seconds later.

Rindov made even easier work of the next, more difficult cube, before moving on to the final and most challenging.

The 4×4 cube stalled Rindov considerably. He worked it for several minutes, before tossing the cube down as he finished.

Beaming, Rindov said hello to his family through the video. Ten years later, things were bound to be different. But as it seemed, the more things changed, the more they stayed the same.

Now college-aged, Chris Rindov is one of Maryland men’s soccer’s leaders, and still obsessed with Rubik’s Cubes. That’s an obsession he owes to his father, George Rindov, who recorded the video of his son solving the cubes.

“My dad was the one that introduced me to the Rubik’s Cube early on because when [he] was a teenager that’s when it came out,” Rindov said. “Everyone was solving it at that point.”

Rindov’s family immigrated to the United States from Bulgaria in 1998 and he said they’ve been the largest influence on his work ethic and drive. But as Chris Rindov grew up, he developed another love: soccer.

“The first time I was ever really introduced to soccer was through my dad,” Rindov said. “We were watching the 2006 World Cup final and I remember it kind of just clicked.”

That World Cup final featured the most dramatic sequence in soccer — penalty kicks. Italy prevailed over France in the shootout 5-3, and Rindov never turned back. After that, Rindov joined a recreation team and then later a club team as he got a little older.

Finally, Rindov landed at the Olney Boys and Girls Community Sports Association under coach Pete Wood. He would compete there for all of his high school career and win a resounding four Maryland State Championships. He attributes most of his athletic development to his time with Wood. Despite the defender’s 6’2” frame and illustrious club resume, he didn’t find many college suitors.

Division I Colgate and Air Force both showed interest, but not with suitable offers. Some Division III interest also followed, but Rindov didn’t reciprocate.

Offerless, he was headed to the University of Maryland to major in mechanical engineering despite the prospect of only playing club soccer during his collegiate career.

But advice from a trusted voice changed everything.

Wood suggested Rindov reach out to Maryland’s coaching staff to get a look in the summer of 2019 and he found himself with a camp invite after coach Sasho Cirovski showed interest.

Rindov attended the camp and did enough.

Cirovski offered Rindov one of the last spots left on the roster. He went from thinking about going to Maryland to play club soccer to walking onto a team that won a national championship the year before.

Rindov made his way on the field quickly. Appearing in nine games in 2019, he contributed to a second-round NCAA tournament team. His work ethic was no small part of that.

“He’s the last guy to leave practice every day,” Cirovski said. “He’s also the person that cleans up all the trash both in our locker room and opposing locker rooms. He’s a very proud person.”

Quickly improving on his skillset, Rindov started several games in the succeeding season as the then-sophomore blossomed into a staple of the lineup. His roommate, Isaac Ngobu, has witnessed many of the defender’s habits over the seasons.

“The guy was going to sleep at 1 a.m. doing homework, waking up at seven for our practices in the spring,” Ngobu said. “Only reason I knew about that is because I was his roommate, he would never talk about it.”

Those tendencies led to more than success on the field that season with the defender earning Academic All-Big Ten honors as well.

All along, Rindov is still infatuated with the same multi-colored cube.

“[He plays with the Rubik’s Cube] before every game, I don’t really ask why,” teammate Nick Richardson said.

“He gets to his own mental stage and area. I think it’s his own thing and [he] stays to himself but it’s awesome to watch.”

Now in his junior season, he’s one of the primary leaders for the Terps. More than that, he’s been an enforcer on Maryland’s backline.

On a handful of occasions in the 2021 fall season, he’s blocked sure goals. One instance saw Rindov stop what would’ve been a chip-in for the Indiana Hoosiers in a valuable regular-season game with goalkeeper Niklas Neumann well out of position.

Chris Rindov had transformed from an unknown to Maryland’s backbone on defense.

“He’s a person that every year he’s improved,” Cirovski said. “After [his] freshman year he played some big parts, and he was challenged to improve some parts of his game. He did. Next year, same thing.”

And despite the early end to Rindov’s season in the first round of the NCAA tournament, a plethora of youthful talent should assist him in what should be an interesting senior campaign next season.

For now, he’ll serve as an inspiration. Many of his old teammates have asked Rindov how he did it.

“It’s very surreal when they ask me that. It’s like, wow, I made it through that way,” Rindov said. “‘It’s very rare you hear someone walks on in the middle of June/July training and get on the team by August.”

Rindov did it. Just as there’s a formula for success with each one of those Rubik’s Cubes he solved in the video, there might be one to make it into high-level college soccer.

“You just have to work hard, know what you’re good at, continue to perfect that and showcase that whenever you’re given the ability to,” Rindov said.

With the results Rindov has put out, he seems to take his own advice. Provided he keeps taking it, one can only imagine his limit. Ten years ago, it was simply an evenly colored cube. Now, it could be leading his team to a national title.