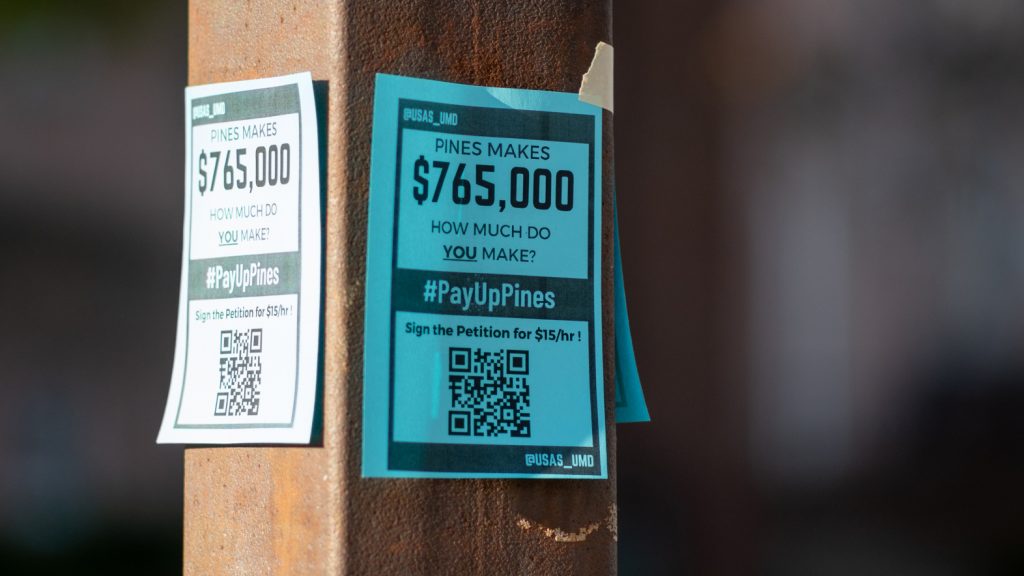 A "Pay Up Pines" flyer. The United Students Against Sweatshops chapter at UMD is staging the campaign, which calls for the minimum wage for university employees to be raised to $15. (Autumn Hengen/The Diamondback)

I’m sure anyone reading this column has passed the flyers scattered around the University of Maryland’s campus, with President Darryll Pines’ salary in big, bold letters: $765,000. As I walked by with friends, many of them turned to me in shock, wondering what he could possibly be doing to be earning that much.

President Pines’ high salary is especially frustrating after many stories about underpaid university employees have come out in the past few months. In July, UM-Shuttle bus drivers protested for better working conditions after some drivers were excluded from receiving hazard pay. The university just raised the minimum stipend for graduate students, which covers only about two-thirds of the cost of living for someone living at the university, making the university’s gap between cost of living and minimum stipend the largest out of all Big Ten schools.  Housekeepers and students at the university have been fighting for a $15 minimum wage just to put food on their tables and afford necessities like rent and insurance.

After seeing that this university’s president makes $765,000 a year, this seems like an unquestionable injustice. But this pay gap isn’t anything new or surprising: studies show that CEOs now make an average of 278 times the salary of an average worker.

To alleviate this egregious pay gap, both at this university and across the United States, institutions must listen to workers and pay them livable wages — instead of salaries that leave them hungry and unable to pay bills.

While the leaders of companies are relishing in long, lavish vacations and extravagant homes, those who work with them in the office every day aren’t making enough to feed, clothe and house their families. It doesn’t make sense, and it doesn’t need to be this way.

One way to do this is to streamline the system for negotiating contracts. In April, the Maryland General Assembly passed a bill that would allow for a union to negotiate a “master agreement” with the University System of Maryland, which could prevent the inequities that arise in terms of benefits between two individuals who work the same jobs. It would also cost less time and money.

Larry Hogan vetoed the bill, claiming it seeks “to address problems that do not exist and change labor practices that have existed for decades.”

While these practices may have existed for decades, there is no doubt that tradition doesn’t equal fair, reliable or sustainable — in fact, it’s often the barrier to progressing toward those things. And what’s also existed for decades is the pay gap between boss and employee, which leaves one able to savor a slew of niceties, while the other can barely afford necessities.

To say the problem doesn’t even exist is a slap in the face to Marylanders, who have been making well under $15 an hour and living in a state that has an above-average cost of living. Despite the push for this pay, $15 an hour is no longer even a livable minimum wage. To secure affordable housing, people need to be earning between approximately $17 and $22 an hour. And if they live in more expensive locations or are supporting a family, that number only continues to climb.

Many are dubious about raising the minimum wage anywhere, questioning whether the logistics are in place to actually be able to do it. But the question doesn’t need to be asked — other colleges have already raised their minimum wage to $15 an hour or pledged to do so within the next five years. Among those colleges includes another public institution, the University of Kentucky.

No one should be working full-time and still be unable to pay for their basic needs because of low pay — especially when their colleagues are raking in such high salaries every year. Frankly, the $15 minimum wage should have been implemented for all workers long ago. But implementing it now for all university employees, and elsewhere, would be a crucial step in the right direction.