To be a model college town, College Park should prioritize biking 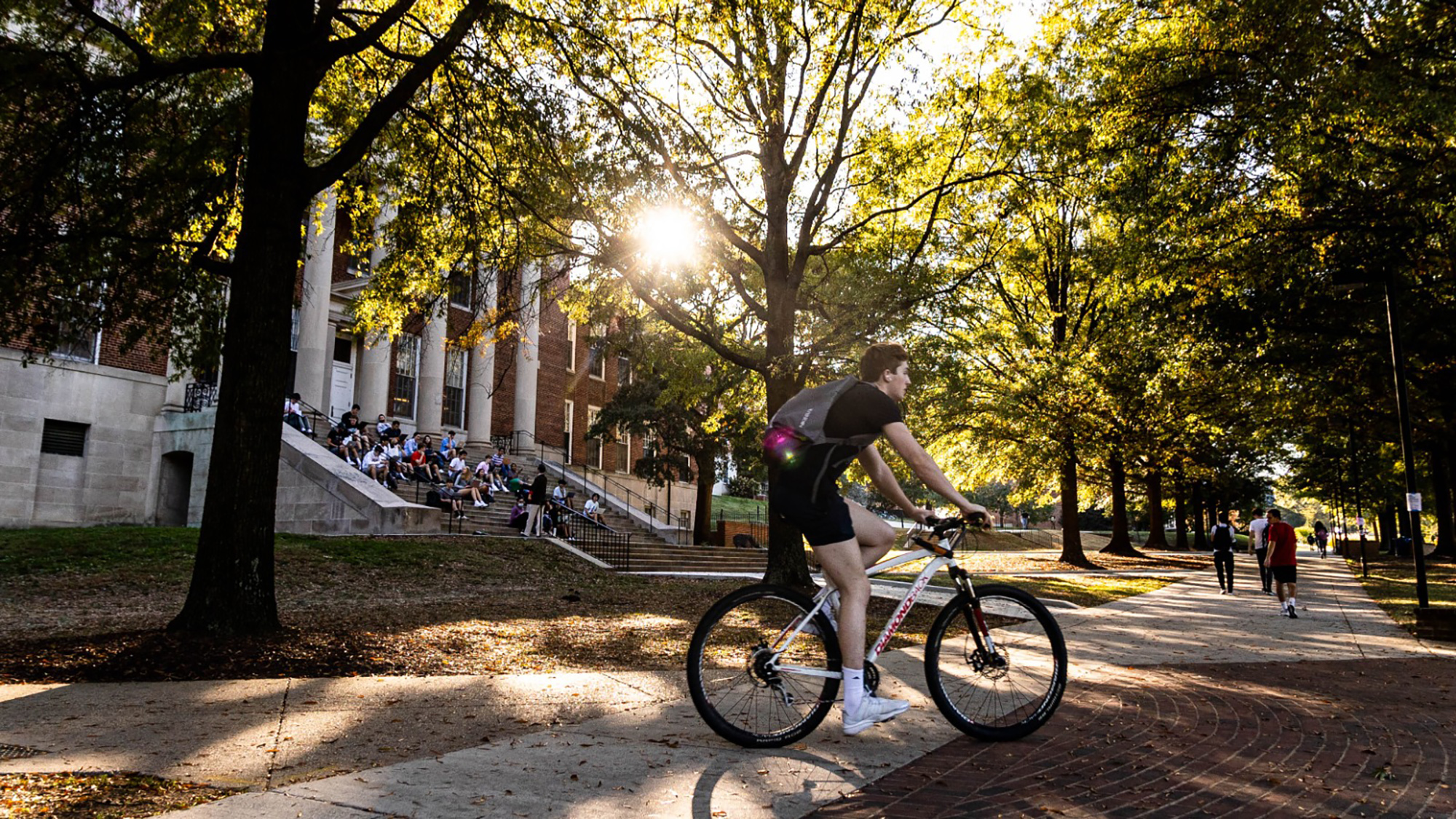 A University of Maryland student rides his bike alongside McKeldin Mall on Oct. 21, 2021. (Julia Nikhinson/The Diamondback)

Since coming to college, I’ve enjoyed the ability to get around campus with my bike. Biking allows me freedom of movement without getting stuck in traffic, having to find parking or modifying my schedule for public transit.

However, when I wander off campus, I feel significantly less safe riding my bike. The speed and closeness of motor-powered vehicles next to me, along with the lack of protection or dedicated riding space, indicates that my form of transit — despite being more sustainable — is not equal to cars.

Biking is a key method of transportation that not only helps the environment, but can be the connecting piece to a safe, healthy and sustainable city. Instead of making bike lanes an afterthought, road planners should make expanding safe and convenient protected bike lanes a priority.

For so much disruption on an important and central road, I was excited to see what the finished product of Route 1 would look like for bikers. Looking closer at the Maryland State Highway Administration’s plans, the new iteration of the road simply adds a five-foot painted bike lane next to motor traffic. One of the primary concerns of cyclists is the threat other vehicles pose to them. With no buffer or barrier between cyclists and cars, why would cyclists feel any safer?

In response to unsafe roads, many cyclists might decide to ride on sidewalks — which takes away pedestrian space — or they might be discouraged from biking at all. Unsafe bike infrastructure could potentially increase the amount of cars, creating greater traffic congestion and increasing carbon emissions. When planners design roads entirely in the interest of cars at the expense of bikes, everyone is punished.

These protected lanes are vital for ensuring safety and demand for biking on large streets. They reduce injuries for bikers by shielding them from cars and reduce the rate of bikers riding on sidewalks, protecting pedestrians from injury. Protected bike lanes also ensure that bikers feel safe riding — a key factor in increasing the cycling rate.

An increase in cycling has immense benefits for cities. Protected bike lanes can increase business and retail sales, decrease traffic congestion and make it more feasible for people to live in the city without owning a car. An increase in biking results in a decrease in carbon emissions, air pollution and car traffic, creating safer, healthier and more sustainable cities. Investing in bike lanes is also much cheaper than investing in any other mode of transportation, while having a significant return on investment, both in terms of economic returns and quality of life improvements. And if cities build safe and convenient bike infrastructure, more people will ride, as was demonstrated in cities such as Washington, D.C., New York and Seville.

College Park has a vision of being a model college town, comprising sustainable urban planning and a healthy and connected community. Biking can play a significant role in making the city safer and healthier by decreasing the number of cars on the roads and reducing carbon emissions and pollution. It will also be important for connecting areas of the city together and increasing economic development. Maryland’s State Highway Administration must advance past the antiquated prioritization of cars over bikes and allow cities such as College Park to reach their potential. Bikes are the future — they shouldn’t be an afterthought.