Faces of the Farmers Market: These vendors make the market, year after year 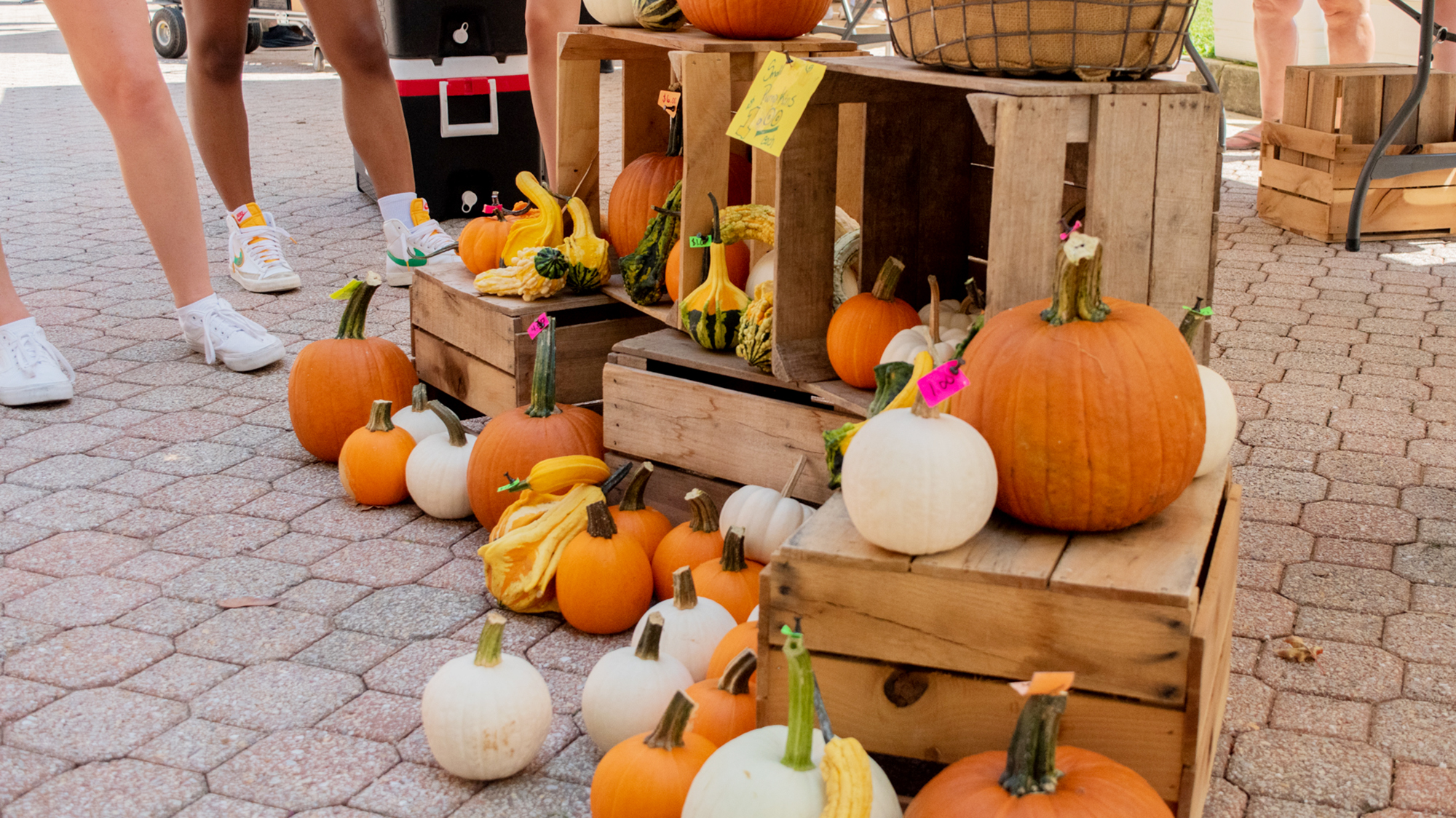 Pumpkins and gourds are one of many goods students can find at the weekly farmer's market in Tawes Plaza. (Autumn Hengen/The Diamondback)

By Kayla Nazaire
For The Diamondback

Chasity Hare rolls out of bed at 5 a.m. on Wednesdays, hoping her morning won’t involve diarrhea. But she can only hope for the best.

When it comes to the animals on Critter Hill Farm, she never knows what she’ll wake up to.

“It is exactly like having a baby,” Hare said.

The livestock must be fed, given water and cared for around the clock. But, for the Hare family, the daily challenges of running a farm are worth it if it means providing fresh meat to the University of Maryland community every week.

The Farmers Market at Maryland has been a popular attraction for students and faculty looking to buy meat, produce, baked goods and other locally sourced products. The market, located at Tawes Plaza, runs every Wednesday between 11 a.m. and 3 p.m. It has been up and running since 2012, with the goal of providing healthy and sustainable food on campus.

Country Vittles from Critter Hill Farm have been with the market since the very beginning. Along with the other vendors, the farmers are who market manager Larry Tumlin says make the market possible.

“Unless it’s, you know, thunderstorms, and it’s lightning, we’ll be there,” Tumlin said. “Because I have vendors that are so committed that they don’t want to lose the clientele base that they have built.”

Neil Vosters of Randalia Beehive has been with the market for about five years selling raw honey and chemical-free balms, soaps and lotions, among other things. Vosters said the clientele of students and faculty is a significant factor in why Randalia Beehive returns to the market year after year.

“I don’t know their names. A lot of them I probably would never see again, some of them I do. But I just think they’re on the right track, and that makes me feel good,” Vosters said.

Hare said that even though the farmers market at this university isn’t their most profitable, their relationship with students is worthwhile.

She said they’ve taught many students how to cook for the first time. Then, each week they come back and tell them whether the attempt was a success or a fail. Eventually, freshmen turn into seniors, and they leave the nest.

“You just hope that they learned something with the relationships that you build here at the market … in the sense that you know, they’re going to continue to make good decisions or at least conscious decisions on where they’re sourcing their food from,” Hare said.

[‘Not just a business’: Community members reel from sudden closure of Bagel Place]

Melanie Parker, the owner of Mel’s Munchies, said she’s happy to see students in person again. Last year, the market was closed due to COVID-19. Tumlin said the shutdown caused the market to lose some long-time vendors.

However, for some of the vendors who returned, they came out unscathed for the most part. Vosters said the business’ online sales increased during the pandemic.

Hare was laid off as a medical assistant at a private practice at the beginning of the pandemic. However, Hare dedicated the extra time to Country Vittles, and the farm was able to attend more markets.

The Hare family has “always been a farming family,” but only produced enough to feed their family. About 20 years ago, when the family fell on hard times, farmers markets were what allowed Critter Hill Farm to sustain itself.

Hare wasn’t the only vendor who had a career change.

Parker is a formally trained pastry chef and worked in a fine dining restaurant before joining the market in 2018. Her mother’s death in 2017 inspired Parker to quit her job and start Mel’s Munchies.

She said her customers are getting the same fine dining recipes but a simplified aesthetic to suit the farmers market. Although running a small business without any employees is challenging, she says she is better off.

Tumlin has been with the university for 30 years and has been the market manager since 2015. Each week he does live demos of healthy meals cooked with some of the same ingredients offered at the market. He estimates that he spends about 15 hours each week preparing for the market but wants to make the market better.

“Even though people say it’s great, I’m not satisfied with the way it is. I definitely want to grow it bigger,” Tumlin said.