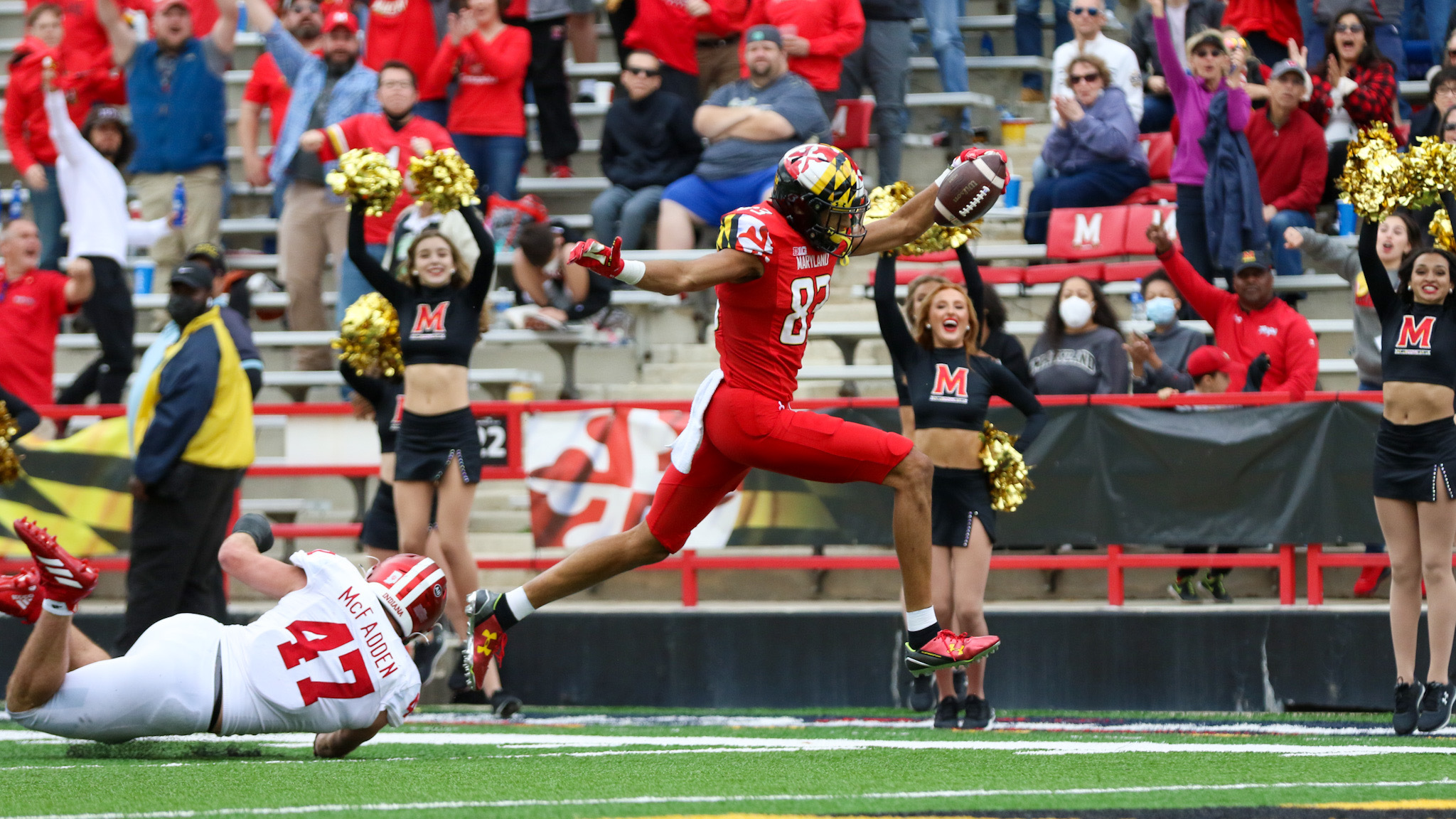 When Carlos Carriere fielded a pass from Taulia Tagovailoa around the 10-yard line, he had a linebacker in full pursuit to his left and a cornerback right in front of him.

Carriere bulldozed his way past the oncoming defenders and found the end zone for a key score in Maryland football’s 38-35 win over Indiana.

That was a pretty common occurrence throughout the matchup — Carriere surrounded or assuredly in a position to be tackled — but the senior showed out with an intrepid performance that helped push his team toward a much-needed victory.

“It was great to see Carlos take advantage of the opportunity to be a starter today,” coach Mike Locksley said. “Did a great job of executing the things we did based on the looks they gave us.”

Carriere set career highs against the Hoosiers, racking up eight catches for 134 yards and two touchdowns.

Before becoming the third Terp to notch a 100-yard game, Carriere only had 225 receiving yards to his name since coming to Maryland in 2017.

But with the Terps already down two of their top wide receivers in Dontay Demus Jr. — who was in attendance Saturday — and Jeshuan Jones, they were in need of someone to pick up the slack.

Maryland had flexed its receiving depth before, but Carriere only had spasmodic opportunities at making a mark in a still-crowded receiving room.

Few would have guessed Saturday would be the day Carriere broke out, but his quarterback knew.

“He comes to work every day, doesn’t say nothing, just puts his head down and works,” Tagovailoa said. “What you guys saw out there today was just the hard work he’s been putting in since he got here.”

Although Carriere was the highlight and the hero, the entire receiving group burned Indiana’s defense all game long. Tagovailoa — who had a career-high 419 passing yards — shared the wealth amongst his teammates, finding Rakim Jarrett for 88 yards and redshirt freshman Marcus Fleming for 64.

Locksley prides his team on being able to plug-and-play despite any absent personnel. The Terps’ offense worked like there was nary a missing link for most of the matchup.

“We prepare every game like if we were gonna start, or we were gonna have a lot of touches or receptions,” Challen Faamatau said.

Faamatau also saw increased playing time with 21 carries for 44 yards and two touchdowns. Injuries to Peny Boone and Isaiah Jacobs meant Faamatau got to take on a role like Carriere’s. Faamatau said he hadn’t had that many carries since high school.

Following Carriere’s first touchdown, Maryland briefly struggled on its next drive. Two blown plays and a false start set the Terps at third-and-12 deep in their own territory.

Carriere was able to haul in a pass for a first down. But that wasn’t it for the senior.

Three plays later, Tagovailoa delivered a ball to Carriere five yards downfield. After juking out his defensive back, he was off to the races. A final dive from Micah McFadden forced Carriere to take a leap as he crossed into the end zone, delivering for his side once again.

“That’s always the main focus is to help the team,” Carriere said. “Just being ready for my teammates whenever my number is called. I just wanna be prepared at all times.”

Carriere’s arrival couldn’t have come at a better time as Maryland needed to quell its losing streak. With a slew of ranked opponents awaiting the Terps, the Hoosiers were likely one of the last chances Maryland had to inch closer to bowl eligibility.

A win and a few new receiving threats can only help the Terps as they move forward. Those season-ending injuries to Demus and Jones had meant Jarrett was the primary target of opposing defenses.

But now, Carriere can’t be ignored, and Maryland is slowly building back the pick-your-poison offense it started the season with.

“We needed guys to step up, and he did big time,” Locksley said.