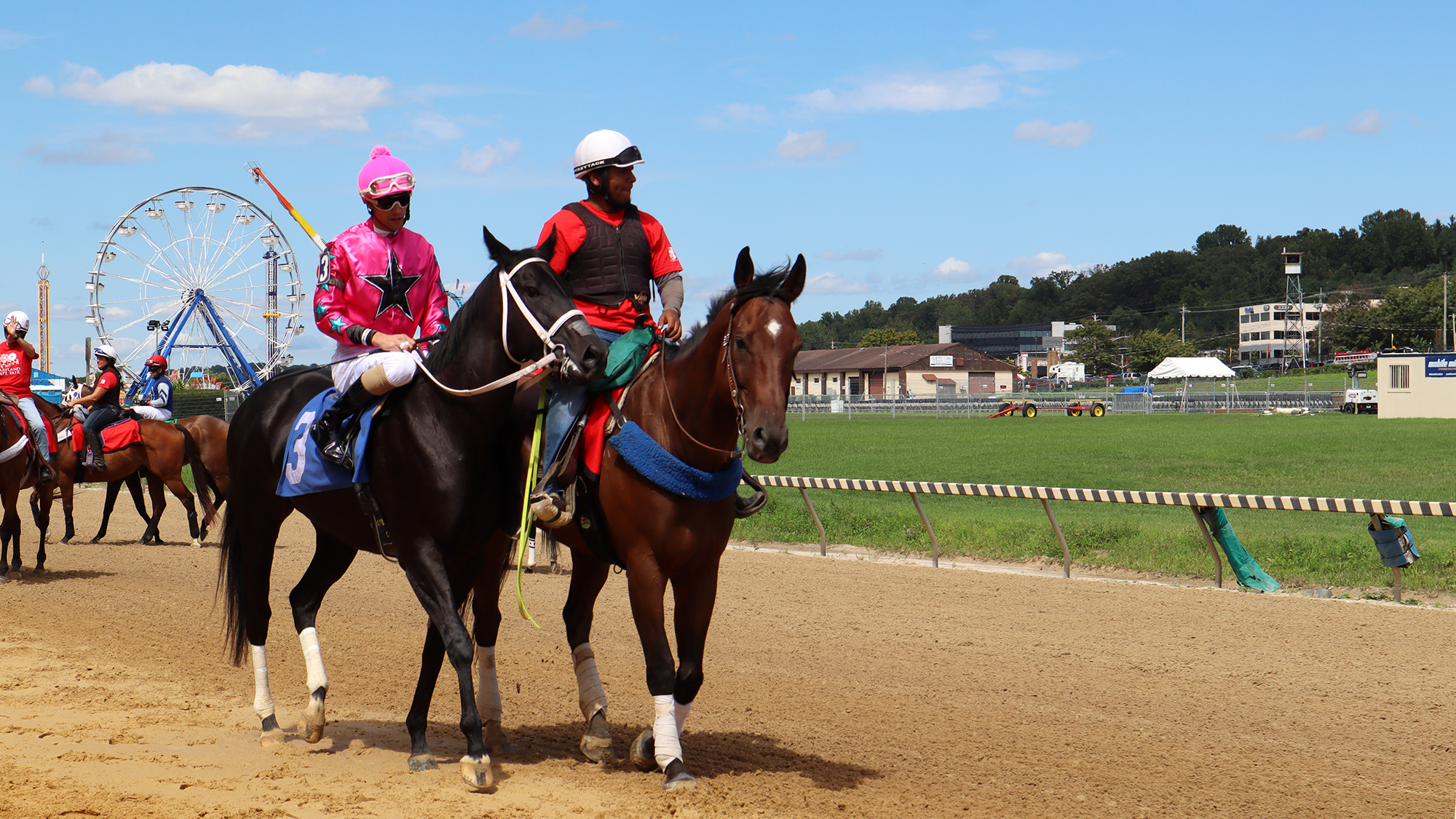 Hell in a Shell and jockey Johan Rosado before their race at the Maryland State Fairgrounds on September 4, 2021. (Photo courtesy of Christie Craven)

By Nolan Clancy
For The Diamondback

There’s nothing like the excitement of watching a University of Maryland-born racehorse run down the stretch of the track, Dr. Amy Burk said.

Burk, a professor and the coordinator for the equine studies program at this university, could hardly keep from shouting at the first race of one horse, Hell in a Shell.

Hell in a Shell, a four-year-old horse owned by University of Maryland alumna Christie Craven, has won three of her five total races, earning $60,437.

“You just have those tears of joy and that excitement,” Burk said.

Hell in a Shell was born at this university as part of an equine breeding program that began in 2013. The program, which stopped owning horses in 2018 due to funding issues, gave animal science students first hand experience raising horses, Burk said. Students took care of mares, supervised births and raised foals through the first days of their lives. The program will resume in the spring, operating the same way, but with privately owned horses.

Many of the horses that were raised through the equine studies program are trained to race. The horses sport university-inspired names, such as Diamondback Fire, Maryland’s Best and Fearless Ideas.

[No horsing around: Odyn quarantines upon arrival to UMD]

“Initially, we would have naming contests on campus and people would suggest names and then the campus would vote on them,” Burk said. “That got to be a lot.”

A group of students, faculty and staff decided on Hell in a Shell’s name, a nod to one of the university’s longtime sports slogans, Burk explained.

The dark bay filly was set to be sold at a thoroughbred auction in December 2017, before a minor injury kept her out of the sale, Burk said.

“I played the Terp card, and I called Dr. Burk and I was like, ‘Hey wouldn’t you love to private sell this horse to me?’” Craven said.

Craven took the filly to her farm, where she was raised until she was ready for racetrack training. The filly, known around the barn by her original nickname, Nova, became the first racehorse Craven has owned independently.

“[Hell in a Shell] is the most misnamed horse ever, other than being a Terp,” Craven said. “She is not hell in a shell, she is a lamb on a leash.”

Hell in a Shell arrived at trainer Laura Roadcap’s barn in August 2020, where her attitude began to fit her name more appropriately.

“She lives up to her name, I can tell you that. She is a handful and a know-it-all,” Roadcap said.

Roadcap stables Hell in a Shell and four other horses at Laurel Park in a small training operation assisted by husband Jerry. Roadcap cites Hell in a Shell’s enthusiasm for training as a factor in the filly’s early career success.

“As soon as the rider gets there, she can’t wait to get out the door,” Roadcap said.

Since her first win in February, Hell in a Shell went on to win at Baltimore’s Pimlico Race Course in July and Laurel Park’s in September, staying close to the pace throughout and holding off competitors down the stretch in both races.

Roadcap is preparing Hell in a Shell for a race this weekend.