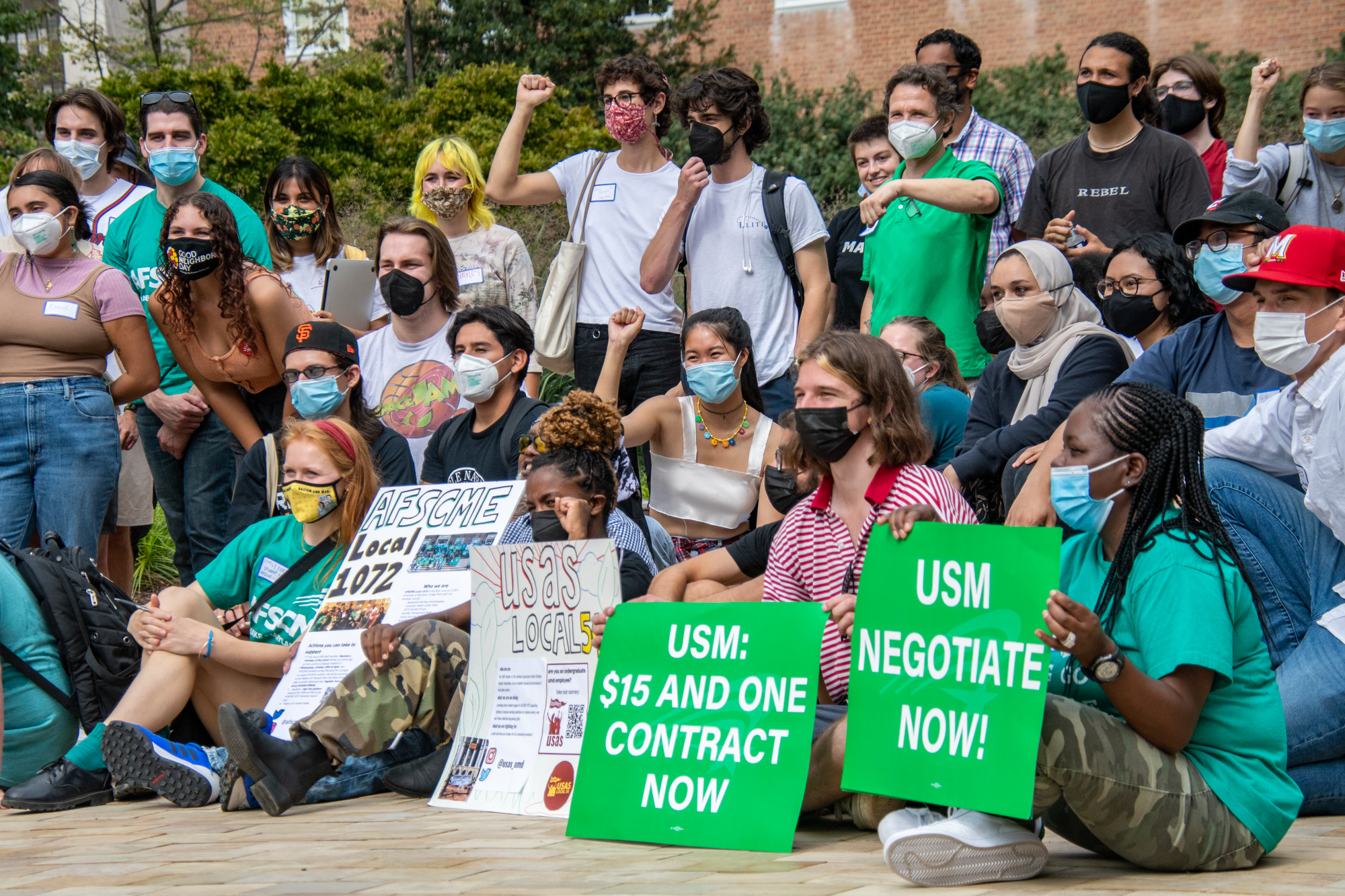 Attendees gather in a group for a picture at the Labor Solidarity Picnic at Hornbake Plaza on Oct. 8, 2021. (Joe Ryan/The Diamondback)

Labor workers at the University of Maryland have fought a constant uphill battle against state and administrative negligence. Housekeepers still make below a basic living wage, some graduate students are working 80-hour weeks just to cover their tiny stipends, many haven’t gotten hazard pay for pandemic labor and the university appears to be actively working to make sure workers are denied the right to collectively bargain for better working conditions. At times, it seems like the university has an open disdain for the people who do critical work to keep this massive system up and running.

Other than the severe lack of institutional and government support, one of the biggest obstacles in organizing campus labor is the disconnect between many student workers and maintenance workers and even more so with the general student body. While graduate and undergraduate laborers can often occupy similar academic spaces, the relationship between student worker and custodial staff feels almost nonexistent because so many of us don’t actually speak to or interact with the service staff on campus.

Labor solidarity at this university will be most impactful when different workers can look each other in the eye and realize they share the common problem of the university prioritizing tuition money over their safety and well-being. Creating a space for this interaction to happen is vital, and it should be heavily emphasized moving forward. So many people on campus are being taught by overwhelmed graduate students and see the same workers cleaning their dorms every single day. Labor solidarity can only mean so much until workers know each other’s names, can exchange experiences and are aware of each other’s day-to-day realities at this university.

This is why it felt pretty refreshing to pull up to the AFSCME Local 1072 Labor Solidarity Picnic Friday. Over 200 members of the campus community — maintenance workers, TAs, GAs and undergraduate workers — gathered in Hornbake Plaza to address the sustained mistreatment they’d experienced while working for the university. It felt like a real-time example of how to effectively unite different groups of labor around their common issues.

It was a lot more than just a picnic or a rally though. While workers from multiple parts of campus shared their horrendous work experiences with the crowd, I felt that the most compelling part of the picnic was the structured discussion. There was time specifically allotted for attendees to talk to someone they didn’t know, especially from a different branch of the university’s employees. Armed with prompts, connections were established around that collective feeling of university neglect. I got to chat with Saul Walker, the chief shop steward who worked in COVID-19 quarantine areas for a year. As a graduate worker, it wasn’t hard for me to acknowledge my negative feelings toward the bare minimum of support the university offers to its laborer workers. At the same time, Walker has put me onto issues — such as the university still holding on to the $28 million of federal hazard pay funding —  that I’d have no real knowledge of as a research assistant.

At this point, it’s obvious the University of Maryland doesn’t care how many appeals, rallies or social media campaigns its workers engage in. It’s still going to respond to these glaring injustices with apathy and shoulder shrugs, if it responds at all. The only real option for workers fighting toward decent conditions is to listen to each other. No successful coalition is formed without all parties involved having a deep knowledge and familiarity with each other’s labor experiences.

Students especially can take steps on their own to do this, but the structure of the labor picnic offered a more streamlined, inclusive and encompassing path for developing labor solidarity. My interaction with Walker was duplicated 100 times over, and the initial relationships formed can only get stronger from here.

What occurred in that moment at the labor picnic is and likely will continue to be the most effective model for building a sustained network of labor solidarity on the campus. To paraphrase United Students Against Sweatshops Local 54 student organizer Michael Marinelli, we need students to get to know the people who are absolutely crucial to the operations of the university, and we want workers to get to know the people who paid tuition to this university. Meeting each other face-to-face is by far the best way to do that.