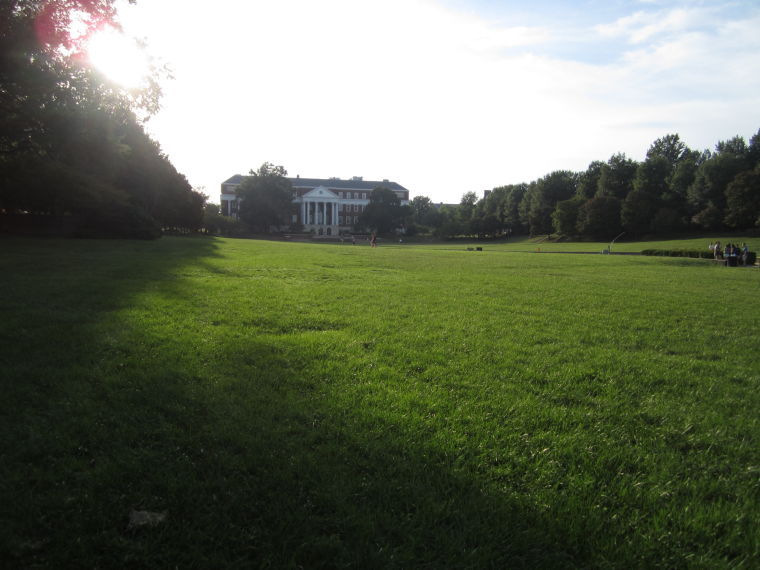 To many, a freshly trimmed lawn is a source of pride, a picture-perfect strip of nature at their fingertips, a symbol of typical American life. Yet, whenever I undergo the weekly hour-long chore of mowing the lawn, I can only think of the paradoxes presented by the American lawn.

I think about the “keep animals away” signs on some lawns due to the herbicides used, contrasted with the strange looks my family would get for having dandelions and pollinators in our yards. I observe the rows of perfectly manicured lawns, which took hours and cost a fortune to maintain — but are never used.

Despite the paradoxes presented by lawns, they continue to play an outsized role in the country. About two percent of the total surface area of the U.S. is dedicated to turf grass, an area roughly the size of Iowa.

For the amount of land dedicated to lawns, it’s important to consider what these patches of green symbolize to the broader American public.

Lawns are a direct manifestation of both a desire to impress others and control the environment. For the amount of time and resources required and the negative environmental effects incurred, traditional monoculture lawns simply don’t have enough benefits to justify the costs. Instead, a less time and resource-intensive and more sustainable “re-wilding” of lawns should be the standard across America.

Lawns have always been a symbol of affluence. In Europe, lawns originated as symbols of conspicuous consumption, demonstrating that wealthy homeowners had the money to pay for the expensive and time-consuming maintenance. These practices of opulence were quickly adopted by the wealthy in America, yet the rise of train lines and the automobile broadened the popularity of lawns, as suburban homeowners aimed to impress passerbys. The explosion of the suburbs marked the imprinting of lawns into American culture, as lawns became an indicator of success and a typical middle-class lifestyle.

For simple status symbols, lawns take a large amount of time and resources to maintain.

Lawn care is a $60 billion industry and the average American spends about 70 hours a year maintaining their lawn. In terms of natural resources required, the U.S. uses about 20 trillion gallons of water every year to irrigate our lawns, two-thirds of the amount used to irrigate all total agricultural crops in the entire country. In the drought-stricken areas of the Southwest U.S., this enormous amount of water used for lawns represents a gross misallocation of scarce resources. In Los Angeles, 50 percent of their allocated water was used for lawns, while in Arizona, the amount reached as much as 70 percent.

In addition to the massive amount of water needed, pristine lawns require a large amount of fertilizer and weed killer. Over 90 million pounds of fertilizer are used a year, in addition to 70 million pounds of pesticides. Pesticide use can ripple through the food chain, poisoning not only the plants and wildlife where it was applied, but also flowing into streams and creeks nearby. Is it worth it to wreak this much havoc on the environment just to impress your neighbors?

However, the conformity and environmental disaster of the neatly trimmed lawn is not the only option.

Alternatives are becoming more popular as the devastating effects of the monoculture lawn become more apparent. Diversifying your yard with native plants has immense benefits, including requiring fewer pesticides, less water and no fertilizers, while simultaneously preventing erosion, reducing air pollution and acting as carbon sinks. These native plants reduce the monotony of the standard American yard and also provide a healthy ecosystem for wildlife and pollinators.

The monoculture turf lawn has been a staple of America for much of the past century, representing the prosperity of the country and the control of humans over nature. Yet as America wrestles with massive wealth inequality, stagnating upward socioeconomic mobility and a seemingly out of control climate crisis caused by this desire to conquer nature, perhaps these lawns no longer represent the America of today.

Given the negative impacts of lawns in comparison to the marginally small benefits, it’s worth reconsidering their de facto monopoly over our green space. It’s time we stop working against the Earth, and instead embrace the beauty and the benefits of a nature-oriented yard.