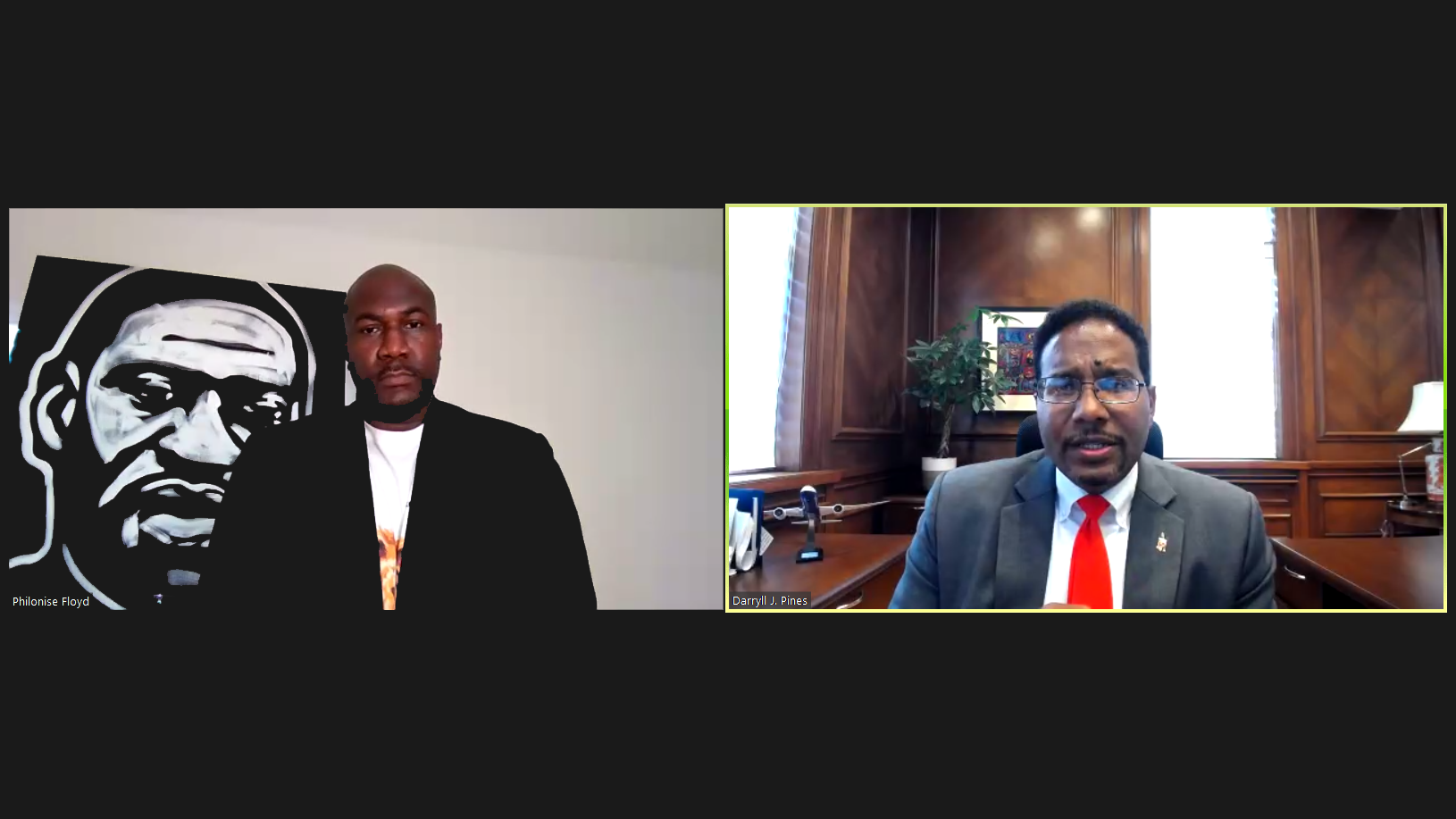 (Screenshot by Khushboo Rathore/For The Diamondback)

George Floyd, a Minneapolis man, was murdered last year after a police officer knelt on his neck for more than nine minutes. His death prompted a nationwide reckoning over systemic racism and police brutality, and Philonise Floyd has since become a leading criminal justice advocate.

“Nobody had ever seen a modern-day lynching like that in broad daylight,” Philonise Floyd said, a portrait of his brother filling the space behind him.

The event was part of Pines’ webinar series “Grand Challenges of our Time.” Pines moderated the discussion and a Q&A portion following Philonise Floyd’s remarks.

Less than a day after burying his brother, Philonise Floyd was testifying in front of Congress. A year later, he and his wife started the Philonise and Keeta Floyd Institute for Social Change, with the slogan “Turning our Pain into Purpose.”

In what seemed like the blink of an eye, he became a social justice activist. It kept him from staying at rock bottom, he said.

“I needed to be out to help families, help try to create change, change policies, try to make sure that this wouldn’t happen to anybody else,” Philonise Floyd said.

Philonise Floyd doesn’t support movements to defund the police, instead focusing on efforts to reform the system. He thinks there are bad people and bad cops in the world, but there are also good ones.

Philonise Floyd also emphasized the need for accountability and that it could only come with the end of qualified immunity. Qualified immunity is a doctrine that shields government officials — including police officers — from being personally liable for constitutional violations.

“I believe in having police. I just want police to do their jobs the correct way and not the bad way,” he said

The number of people that Philonise Floyd saw talking about and protesting his brother’s death was astonishing. George Floyd’s murder, and his daughter saying, “My daddy changed the world,” forced people to look at issues of police brutality, Philonise Floyd said.

His brother’s death also changed his family. When Philonise Floyd heard that his brother had been murdered, he was trucking for work. He pulled over to a rest stop and started sobbing, he said.

George Floyd had been the patriarch of the family and an integral part of the community. He would give kids haircuts and give away clothes to kids in need.

“When he relayed messages to young kids … they were listening because they were inspired by him. They loved him,” Philonise Floyd said.

Philonise Floyd hasn’t been able to see as much change as he wants, especially with the George Floyd Justice in Policing Act — a police reform bill proposed in Congress — failing to materialize. He knows that he can’t stop fighting, he said.

“The number one thing is, never give up hope,” Philonise Floyd said. “If you give up hope, you have nothing to fight for.”