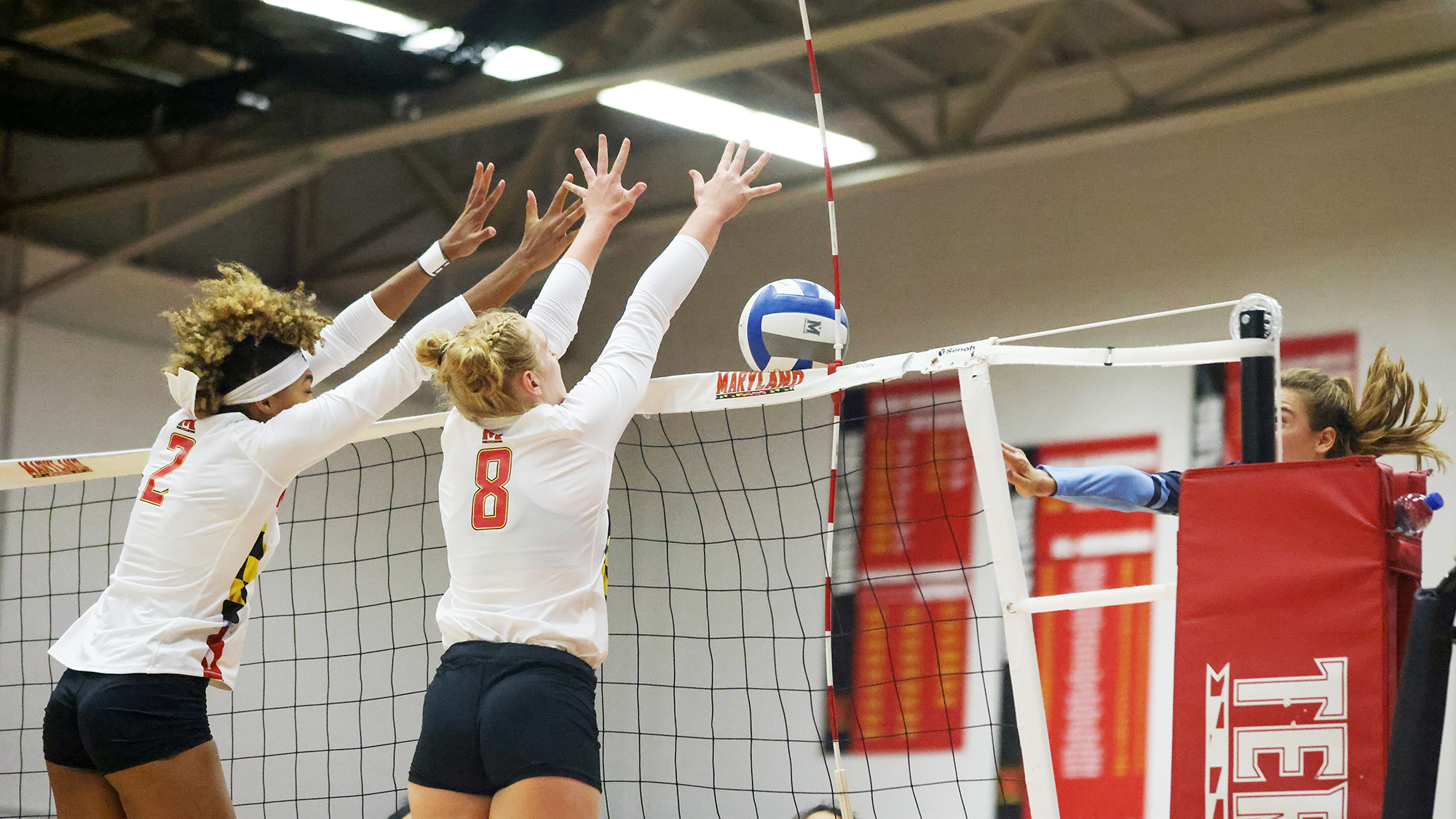 Rainelle Jones and Sydney Dowler jump for a block during Maryland volleyball's 3-0 win over Columbia on Sept. 18, 2021. (Collin Riviello/The Diamondback)

After strolling past Akron, Stony Brook and Columbia at the Maryland Challenge, Maryland volleyball closed out its nonconference slate with a flawless 12-0 record.

The Terps, who are enjoying their best opening start since 2005, are one of only three Big Ten squads to hold an undefeated record going into conference play.

But the road will only get tougher for the Terps.

Coach Adam Hughes’ squad will face possibly its toughest test of the season Friday when Maryland hosts No. 2 Wisconsin in College Park to kick off its grueling conference schedule.

“Watching film, this is the most impressive team I’ve seen in probably a couple years,” Hughes said of the Badgers. “When they’re in system, they’re just really hard to stop offensively.”

Led by coach Kelly Sheffield, Wisconsin is off to an 8-0 start heading into Big Ten play. Following a Final Four appearance in the NCAA Tournament last season, the Badgers returned a majority of their starters in hopes of achieving the program’s first national title.

For Hughes, gameplanning in preparation for Wisconsin’s sizable threats has been a challenge for his coaching staff in practice.

“Some of [Wisconsin’s] players are so impressive, there’s not really that much you can do or try to mimic on that,” Hughes said.

Perhaps Wisconsin’s most daunting threat is middle blocker Dana Rettke, who returns to Sheffield’s squad as a graduate student for her fifth season. Standing at 6-foot-8, Rettke has torched Wisconsin’s early opponents with a conference-high .569 hitting percentage.

But the Terps have their own monster in the middle to help parry Rettke’s game-changing offense.

Maryland middle blocker Rainelle Jones currently leads the nation with a stifling 2.06 blocks per set average. Joined at the net by middle blockers Laila Ricks and Cara Lewis, Jones and the Terps have built a stout defense that has held its opponents to a pitiful .097 hitting percentage through the team’s first 12 games.

“I feel like it’s definitely a big reassurance, me working hard and me working with my teammates and the coaches about what’s been going on during the entire season,” Jones said.  “I feel like it’s just a step ahead for more accomplishments in the future.”

Despite Maryland’s dominance of its nonconference opponents early in the season, the Terps aren’t getting complacent ahead of their upcoming battle with the Badgers.

For Hughes, it’s been sticking to a routine that has helped keep his squad focused ahead of one of their biggest games of the season.

“We know Wisconsin is arguably the best team in the country, so I don’t think anyone’s surprised by that,” Hughes said. “We’re trying to stay with our routine, stay with how we are trying to improve ourselves and I feel like the group is pretty committed to that.”

And for Jones, converting the team’s high standard held in practice to their match against Wisconsin will help in their desire for an upset against the Badgers.

“We’ve been preparing for the Big Ten conference for a long time throughout the preseason,” Jones said. “We’ve talked a lot about standard and keeping that standard for routines and practices and then bringing it up to the game.”