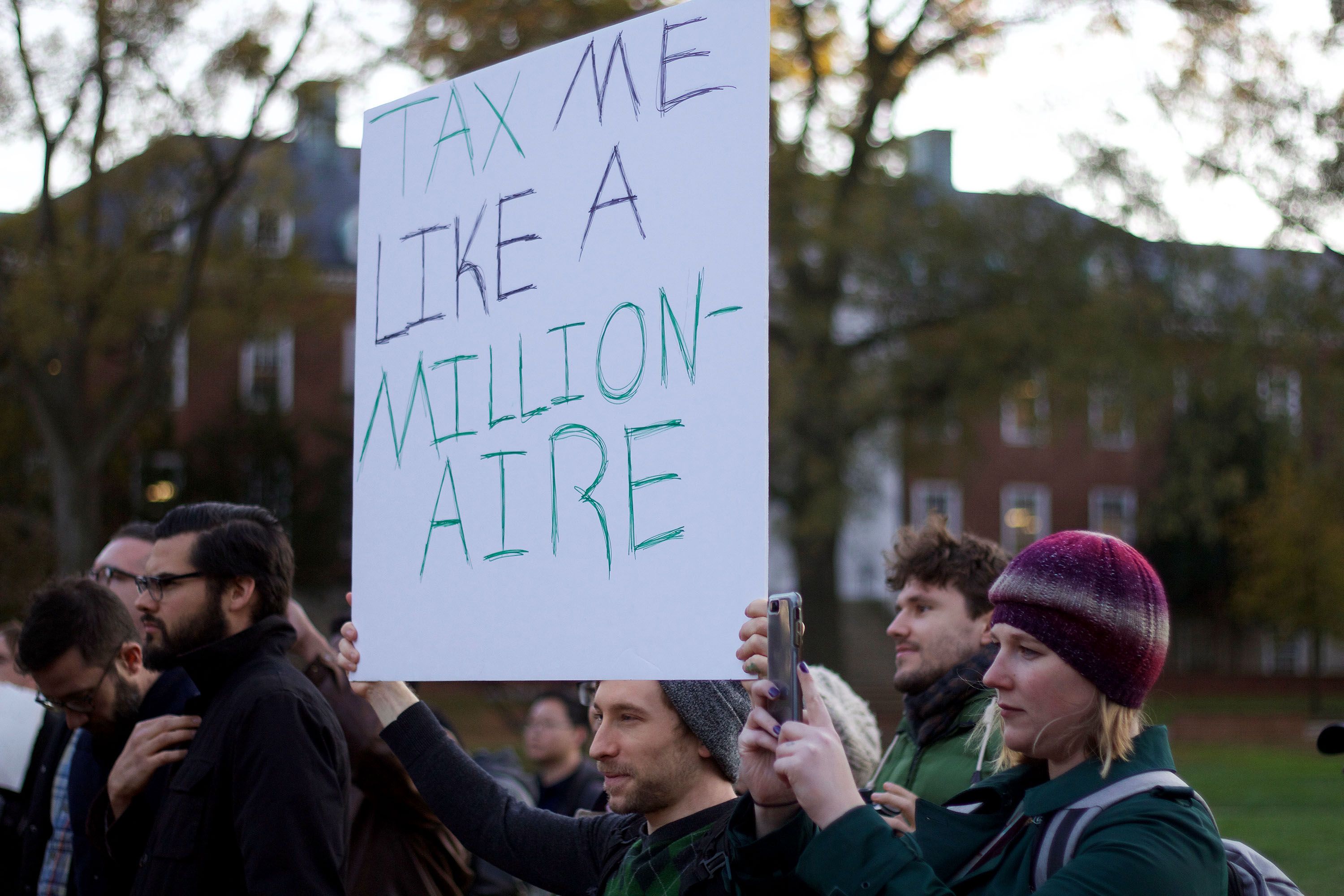 Grad students marched across McKeldin Mall on Nov. 16 carrying signs and chanting in opposition to the recent tax bill that would impose harsher taxes on students. (Julia Lerner/The Diamondback)

There is a long-standing idea baked into the American psyche that our style of capitalism fuels the most efficient and prosperous outcomes, while providing an equality of opportunity that ensures that any differences are a result of choices instead of circumstances. However, the recent U.S. Department of the Treasury report on how the rich avoid taxes on a massive scale confirms that ascending the socio-economic ladder with ease was never the case.

Rich Americans avoiding their taxes are enabled by the underfunding and inefficiency of the IRS, and this negligence creates a devastating impact on our government’s ability to fund social programs.

The report reveals that the top one percent of earners collectively underwrite their taxes by $163 billion, while the top five percent are responsible for more than $300 billion of unpaid taxes.

This is a staggering amount. The circumstances that allow for the rich to avoid paying their owed taxes are partly due to the IRS not having enough money. In a similarly shocking report, the IRS admitted that it audited poor people at the same rate as rich people due to lack of funds. Poor people are easy to audit, while it takes more time, money and experienced staff to audit the rich — resources the IRS doesn’t have due to underfunding by Congress.

The underfunding of the IRS leads to a double, or even triple whammy effect on the working-class: they are the ones paying the tax burden in full, they are disproportionately audited by the IRS and they are the ones who will suffer the most from the defunding of social programs brought about by deficit-hawk politicians. This negative feedback loop built into the structure of our tax system creates and cements inequality into the fabric of our society.

Let’s compare the more than $300 billion of unpaid taxes to some recent “expensive” policies. The “once-in-a-political-lifetime” $3.5 trillion infrastructure bill costs $350 billion a year, universal childcare is estimated at $35 billion, and — most relevant for us college students — tuition-free college is estimated at $48 billion a year. Instead of being used on yachts and billionaire pet projects, this hoarded money could easily fund programs to improve the lives of average American citizens.

It is clear that politicians are making bad-faith arguments in defense of keeping the tax and auditing system the way it is. To them, they think arguments about “freedom” and “limited government” will be enough to convince the general public to sacrifice their income, while the rich vacate their responsibilities to the country. However, many Americans actually are in favor of increasing the IRS budget to make everyone pay their fair share — more than two-thirds in fact. And yet, additional funding for the IRS was cut out of the recent bipartisan infrastructure bill as a compromise, even though this investment would have helped cover some of the costs of the plan.

This report demonstrates the amount of damage that is being done to everyday Americans. On both sides of the aisle, the underpaying of taxes presents a major problem — for progressives, the loss of potential social programs, for conservatives, money that could go toward paying off the deficit. Eliminating the tax gap would not only lift some of the tax burden off of the working and middle classes, but could also fund the programs that would expand and strengthen the middle class and work to eliminate racial disparities in wealth.

With the evidence provided, it is of no use pretending to believe that our system is fair or that limited accountability for the rich is necessary for our system to function. There is a moral and a popular imperative to fix this calamity, and politicians must have the courage to make the changes needed for a more just and sustainable economy that works for everyone.