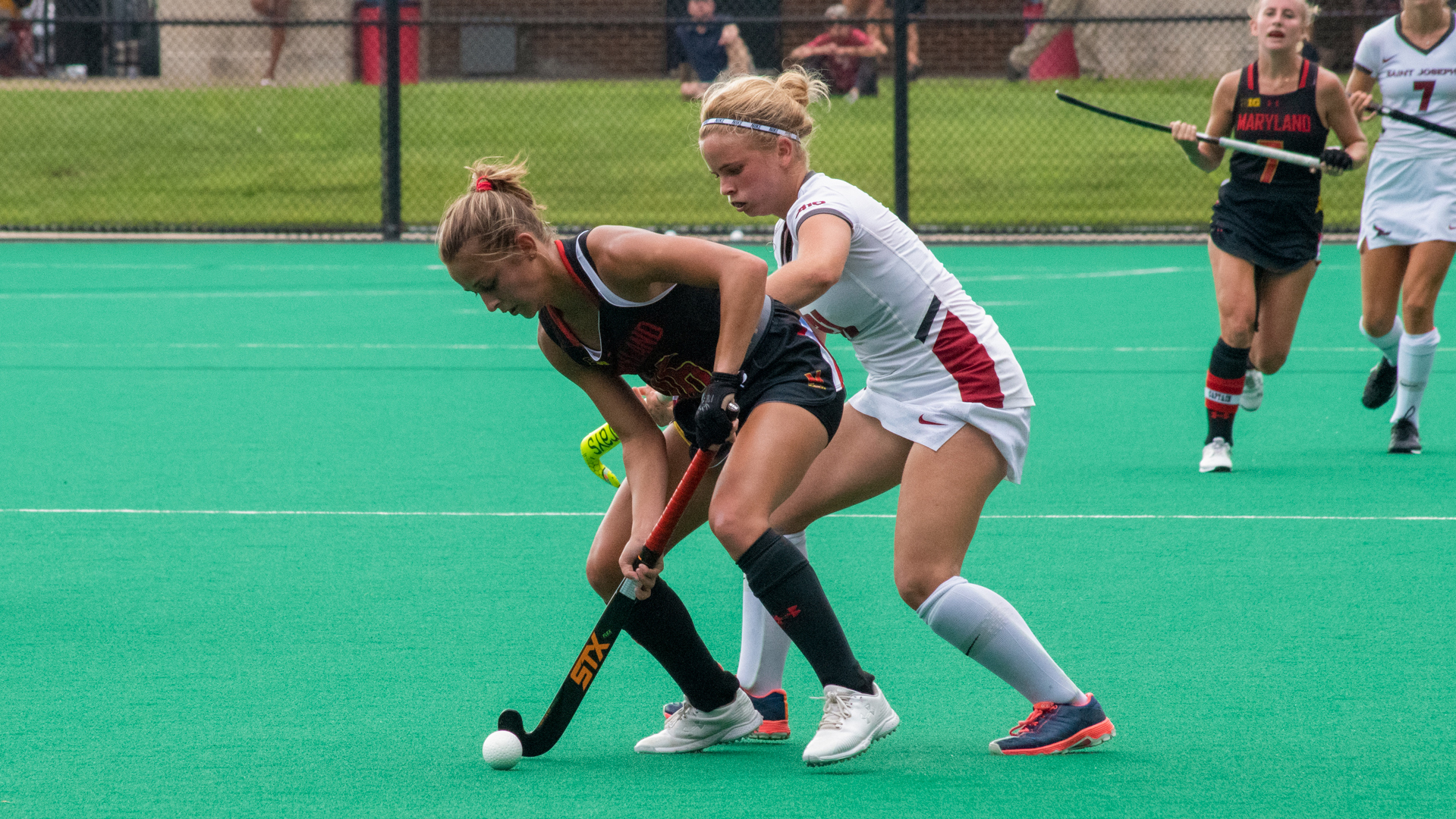 No. 9 Maryland field hockey was firing on all cylinders on Sunday.

After Boston College burned the Terps with aerial passes in Friday’s 3-2 loss, Taylor Mason sent one of her own upfield late in the third quarter. And Maryland’s new transfers did the rest.

Margot Lawn was the beneficiary of Mason’s parabolic pass and dashed further downfield. Once she ran into a defender, she found Julianna Tornetta, who smacked in her first goal in black and gold — the Terps’ fourth of the contest.

Maryland rolled to a 4-0 win over No. 12 Duke. The Blue Devils didn’t register a single shot on goal.

“We literally just started off today as if it was just an extension of [the second half of] Friday’s match,” coach Missy Meharg said. “We had four very strong quarters, we played three different presses, and were able to be dominant throughout the whole game.”

The Terps (2-1) got their offense rolling early. Not even four minutes into the match, Riley Donnelly fed a pass into the circle toward Bibi Donraadt. The senior forward handled the pass and buried a shot in traffic to give Maryland an early 1-0 lead.

And the offense continued. After the Terps drew the first two penalty corners of the match, they got the ball past Duke (1-3) goalkeeper Piper Hampsch — once again with Donraadt doing the honors.

Kyler Greenwalt fired a shot toward the cage. Donraadt was in the area and knocked in her second goal of the match, extending her squad’s lead to 2-0.

On top of her pair of first-quarter goals, Donraadt had already registered four shots on goal. After inserting both of Maryland’s early penalty corners, she hopped back onto the pitch with her stick down, constantly giving herself promising opportunities to score.

“I’m not afraid to go in there because I know their capabilities, and I know that they’ll keep it low,” Donraadt said. “We work really well off each other and are just having fun together.”

Late in the second quarter, Duke was working with the ball in the backfield. But before it could even make it past the 23-meter line, Maryland’s Mayv Clune was there to force a turnover.

Clune sent a pass into the circle to Hope Rose,and the freshman collected the first goal of her career. The Terps took a 3-0 lead in the first half over their longtime rival.

Maryland dominated throughout the match. It drew eight penalty corners against Duke’s two.

The Blue Devils drew their first penalty corner five minutes into the third quarter. Leah Crouse got the shot — just Duke’s second of the day — and it was blocked before it could reach goalkeeper Noelle Frost.

Although the Terps dominated on the scoreboard, a handful of replay reviews slowed the action.

Duke earned another corner after a long review moments after its first. And again, the Terps’ defense deflected the shot and sent the ball toward midfield.

Eventually, Tornetta led Maryland in transition upfield. But the Blue Devils snagged the ball away and continued to make offensive strides — all of which were shut down.

Late in the third quarter, the Terps turned their strong defense into offense again, Tornetta rocketed her first goal past Duke goalkeeper Grace Brightbill, who took over for Hampsch in the second half, and gave the Terrapins a 4-0 advantage.

It was an all-around team effort for Maryland. It took 17 shots, which came from nine different players. The Terps leave the Big Ten/ACC Cup with a split and their first shutout of Duke since 2012.

“I don’t know those statistics,” Meharg said. “One thing I do know very well: There’s nothing worse than a drive home from North Carolina, having not played well in a loss.”