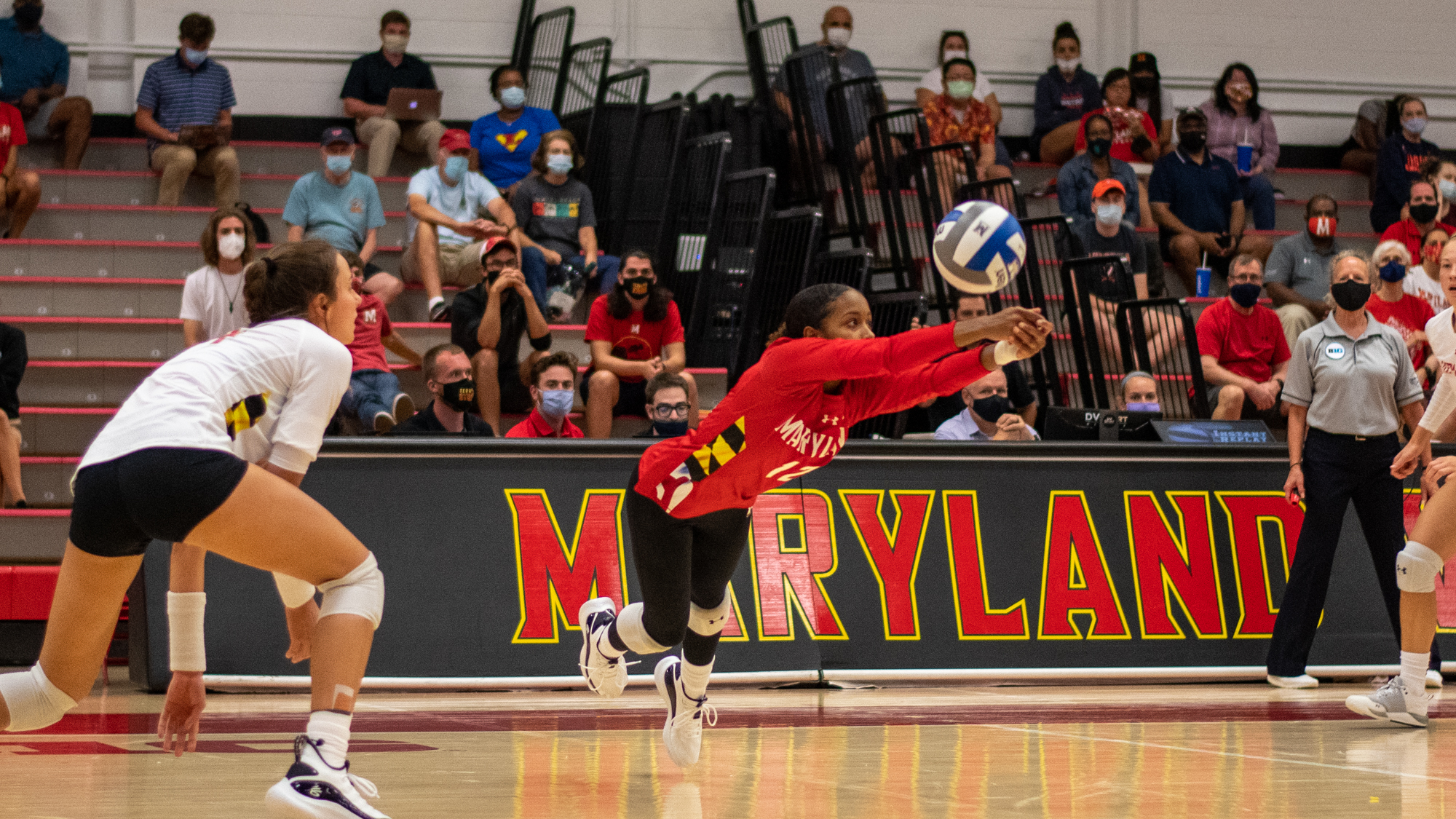 Milan Gomillion lays out for a dig during Maryland volleyball's 3-1 win over Virginia on Aug. 27, 2021. (Joe Ryan/The Diamondback)

Kaylee Thomas dribbled the ball five times on the service line before lobbing it high into the air, sending a speedy overhead serve in the direction of Central Connecticut State’s back row. Recognizing the direction of the attack, the Blue Devils swiftly rotated, redirecting the ball toward opposite hitter Isabelle Roufs.

Roufs pounded an overhead spike over the outstretched arms of Rainelle Jones and Paula Neciporuka. But the rocket was met in Maryland volleyball’s back corner by a kneeling Milan Gomillion, who dug the ball out of the ground for a Neciporuka kill just moments later.

It was one of Gomillion’s match-high 12 digs of the day, leading the Terps to back-to-back 3-0 victories in some of her first action as a freshman at the libero position.

“She just makes plays,” coach Adam Hughes said. “She’s able to turn points when we need them. There’s a lot of opportunities where I’m not sure how you can coach someone to make that play.”

With the departure of libero Sam Burgio this past offseason, Gomillion was thrust into a starting role in Hughes’ rotation almost immediately. And while the task of starting on a Big Ten roster as a freshman can be daunting, Gomillion has shined early in her Maryland career.

“Before I went out, I was really nervous,” Gomillion said Friday. “But then the adrenaline kinda got me [through] the first set, and then I just let it fly.”

In Friday’s season-opening matchup against Virginia, Gomillion showed flashes of her potential.

Finishing with 24 digs in just four sets, Gomillion was all over the floor to help hold the Cavaliers to a subpar .155 hitting percentage. With a multitude of diving digs throughout the contest, Gomillion helped lead the charge in the Terps’ first win of the fall.

“She’s just kind of natural,” Hughes said. “That was a huge performance by her. [24] digs is exceptional, and I think she left a few on the table.”

Gomillion’s stellar play would carry over into Saturday’s doubleheader, as the young libero helped to fight out of an early first set hole against Central Connecticut State.

With the match knotted at 16, Gomillion notched a clutch service ace to gift Maryland a late lead. Gomillion remained in to close out the frame, helping the Terps fend off multiple set points to steal the first set of action against the Blue Devils.

For Hughes, Gomillion’s intense play style has translated to the rest of the team and paid dividends early in Maryland’s young season.

“We’re much scrappier than we’ve been in the past, and I think people can see that firsthand,” Hughes said. “That’s probably led a little bit by Milan … but everyone’s doing their part right now.”

So, following three dominant wins to open its season, Hughes’ scrappy Terps look to have found their libero of the future.

“Everyone’s going to know who Milan is by the time she finishes here,” Hughes said.