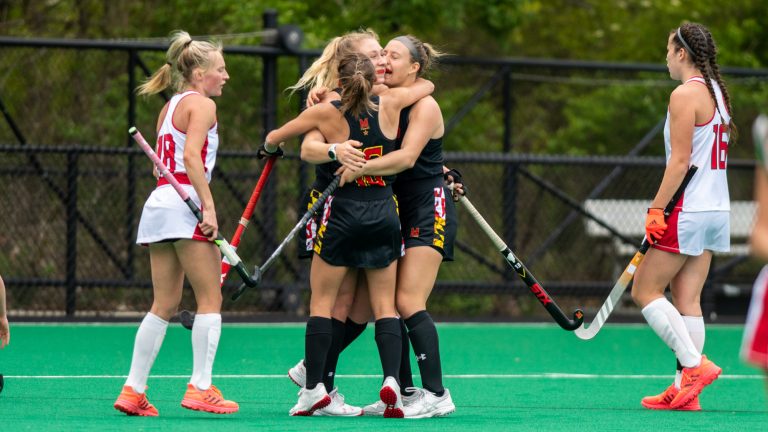 When someone walks into Maryland field hockey’s team room at the Field Hockey and Lacrosse Complex, they can typically see an international field hockey match playing on a flat screen TV.

On Monday, the team filled up the room, watching Team USA’s under-21 team take on Trinidad and Tobago in the Junior Pan American Championship. However, three of them weren’t there.

Emma DeBerdine, Riley Donnelly and Hope Rose were in Santiago, Chile, on the very pitch their Terp teammates were watching.

The rest of coach Missy Meharg’s squad got to watch the trio dominate, as the U.S. pulled out a 15-0 thumping, featuring a Rose hat trick. And when their new freshman teammate netted her third goal of the match, the Terps back home burst into cheers.

“The staff was in the women’s lacrosse locker room, we were working on something else. We just heard them just screaming,” Meharg said.

The trio competing for Team USA will be absent when it comes time for Maryland field hockey to begin its season on Friday. But when they return, each figures to be a key part of the 2021 iteration of Meharg’s Terps.

Their college coach knows being committed to multiple teams can be difficult. Hearing the crowd of players erupt down the hall as their teammates intimidated their opponent on one of the highest stages for their sport was great. But she’s not surprised.

“If you want to compete for your country and you want to be a Maryland Terrapin and study here, we’re going to do everything we can to put you on that stage,” Meharg said.

Meharg thinks this particularly upbeat and positive team chemistry has been in place as long as she’s been in her position, now entering her 34th season as the skipper.

Senior midfielder Taylor Mason called the three of them on the phone right after the game, and they were excited to hear their teammates were cheering them on. Mason chatted with them about how their opponent looked, along with going over some of Team USA’s game plan and how they could implement some of it with their collegiate squad.

“There’s no way that you can get to the finish line or the national championship without being super close as a team,” Mason said. “If you can’t battle with each other off the field, then there’s no way you’re going to do it for each other on the field.”

Graduate student midfielder Kyler Greenwalt is among several Terps who have also played in the USA field hockey system. But getting to see the American squad — let alone her own teammates — on TV is particularly special.

“It’s such a big deal because it’s the Junior Pan-Am cup. But also, like, they’re on TV,” Greenwalt said.

Strong team chemistry starts with good leadership. And Meharg’s fall 2021 squad has it.

When DeBerdine talks, people listen. If she says she’s going to do something, she does it.

And the Terrapins will mesh that energy in the team room with a fast-paced tempo of hockey when they take the pitch for the first time Friday afternoon against UMass Lowell.

No. 7 Maryland field hockey falls to No. 8 Penn State in overtime, 3-2

Maryland celebrated National Field Hockey Day by doing what it knows: getting on the field

Back to winning big, Maryland field hockey is exuding more passion than ever