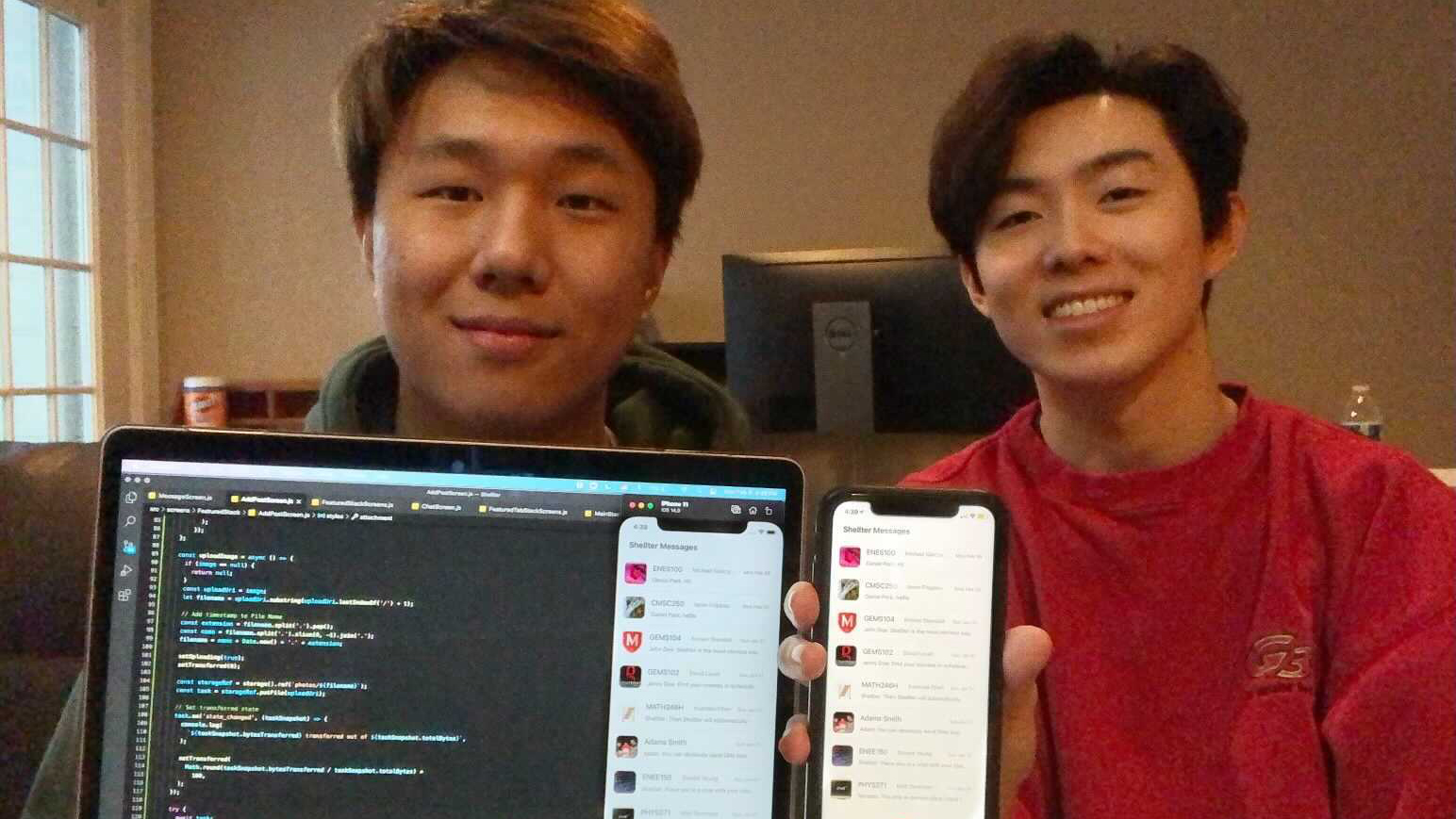 The free app, which has been in the works for about nine months, is the brainchild of sophomores Daniel Park, a computer engineering major, and Daniel Wei, a computer science major. The duo set out to create Shellter as an alternative to GroupMe to give students an easier way to create course group chats. The app will soon be available for Android devices and online.

“It’s just creating a more cohesive kind of experience rather than splitting one app for chat, one app with schedules, and so we just put everything together into a one nice package,” said sophomore computer science and finance major Zach Zhao, who designed the app’s website.

When users join Shellter with their umd.edu email and enter their schedules, they’re automatically added to group chats for each of their courses, Park said. Once they’re in, they can message other students in their classes. Users can send direct messages or create chats of their own to communicate with clubs or other users.

With GroupMe, it can be stressful for students to find chats associated with their specific courses, Park said. Often, students resort to massive Google spreadsheets that detail different classes and their respective group chats.

To create a community, Shellter will also have a feature called Confession Screen where users can send in anonymous confessions to be posted to a message board.  Moderators will vet all confessions first to make sure they’re appropriate.

Shellter plans on taking a reactive stance on cheating, Park said. Users can delete messages after they’ve sent them to give them a chance to change their minds about cheating. Updates to the app could include a feature where users can report cheating within chats.

Shellter’s name represents the app’s goal — a unified central platform for students — and the Testudo mascot.

“[It’s] like a little home for students,” Park said.

During their initial week, Park expects about 100 to 200 downloads, based on about 300 upvotes he received after describing the app to users in the r/umd subreddit. Additionally, about 150 users signed up for early access.

“[Releasing the app] was awesome, there’s nothing like this right now,” said Om Pathak, a sophomore computer science and math major who handled the business and product management jobs on the Shellter team.

While the team hasn’t focused on marketing Shellter, Park hopes professors will endorse the app for their classes, and Zhao says word of mouth could help the app take off.

Steppan Konoplev, a senior math major, has signed up to be on the waitlist for Shellter. He liked the features — such as a page for course group chats and having anonymous confessions — advertised on the website.

“What they have so far looks good,” Konoplev said. He said he’d download it as soon as it becomes available on Android.

Although there are no set dates for the Android release, the team wants to get Shellter on the Google Play store as soon as possible. Pathak said it could be available as soon as October or November.

Park said Shellter could later expand to other universities, such as the University of Maryland, Baltimore County. The app could also include a roommate-searching feature down the line.

But for now, Shellter’s focus is on creating a community for Terps. The creators aren’t planning on putting up ads to earn money.

“Shellter will be for us students,” Park said. “We [hope] it becomes a powerful tool for students to socialize and just find out more about their classmates and have an easier way to find and join course group chats.”
Senior staff writer Angela Mecca contributed to this report.