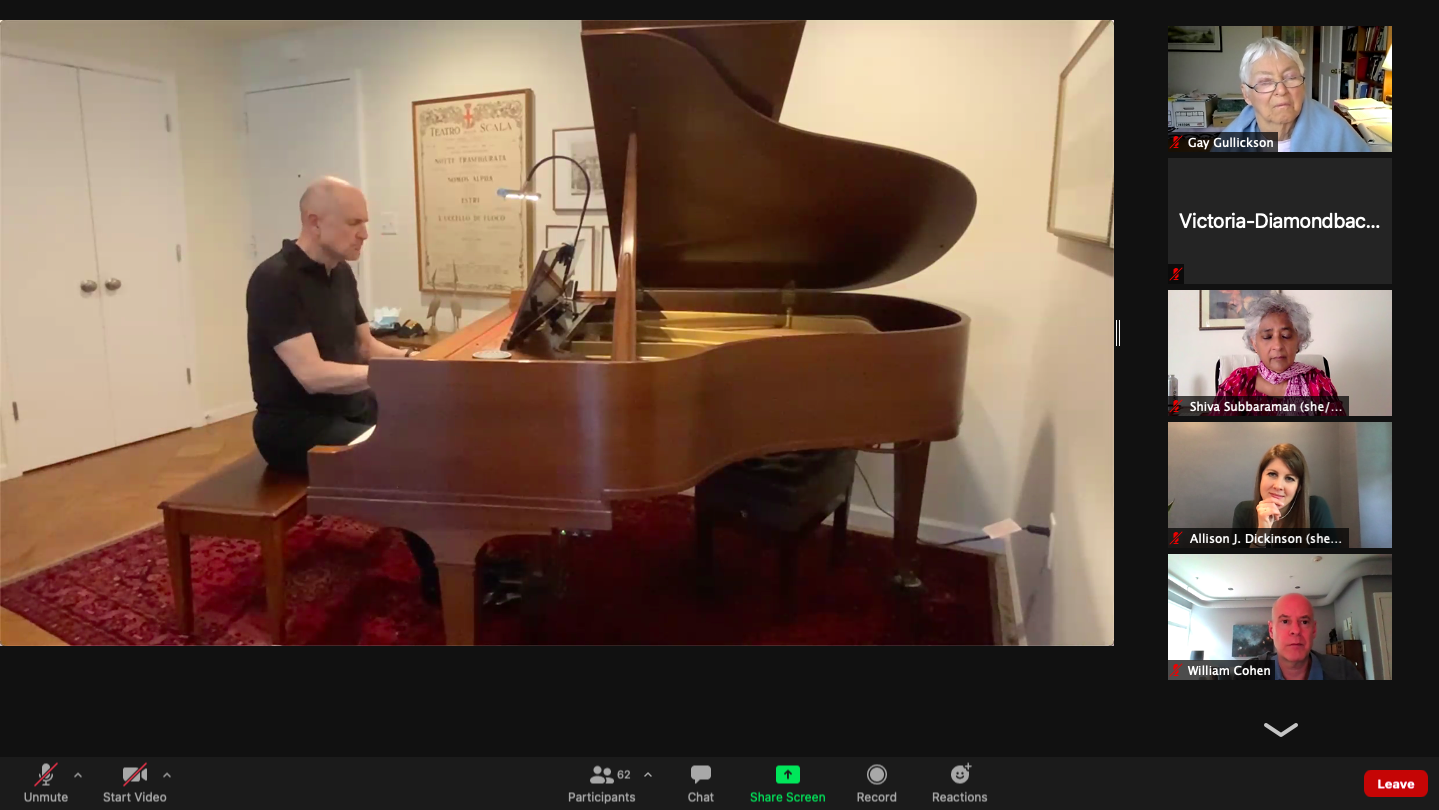 Luke Jensen shows a video of him playing his rendition of Brahms, Intermezzo in A Major (op. 118, no. 2) for guests at his retirement party, held on Zoom Wednesday. (Victoria Ebner/For The Diamondback)

When rising senior Noah Offenbacher first came to the University of Maryland, he wasn’t sure how he would find his place at such a large institution.

Striving for somewhere to belong, he followed a friend to this university’s LGBT Equity Center — and soon after, Offenbacher met Luke Jensen, the founding director of the center.

The two began chatting from time to time. Sometimes, they talked about Jensen’s life experiences, sometimes LGBTQ+ programming at the university, and sometimes, Offenbacher would just pose a question, and they would go deep into discussion.

“He was a big part of … welcoming me to campus,” said the English and psychology major. “His wisdom that he shares has been super valuable.”

More than 60 past and present staff and students gathered on a Zoom call Wednesday, expressing similar sentiments to celebrate Jensen’s retirement after more than 30 years at the university. Attendees took turns sharing how Jensen touched their lives during his time at this university.

“Just to warn you all, there may be tears shed,” Georgina Dodge, the university’s diversity and inclusion vice president, said at the beginning of the event, pausing to deeply sigh. “And I know there will be a lot of laughter.”

Many of those present thanked Jensen for persevering despite hardships. Shortly after Jensen arrived at the university to work as the associate director in the Center for Studies in 19th Century Music, his first partner became ill and died of HIV/AIDS in January 1990.

After struggling for years with that loss, Jensen realized what he needed to do to get back on his feet: Accept where he was and make this university a more supportive place for LGBTQ+ community members.

“What was needed was visibility, so that people would know that they aren’t alone, and that they can live their true and authentic lives,” he said.

Springing into action, Jensen became the co-chair of what is now known as the LGBT Staff and Faculty Association around 1994, where he helped push the university for domestic partner benefits.

A few years later, he worked alongside LGBTQ+ staff and students to craft a report that laid out a vision for the future of LGBTQ+ programming at the university, highlighting the need for resources such as a president’s commission focused on LGBTQ+ issues and a LGBTQ+ studies program.

Quickly, changes began to occur. Jensen was named the inaugural chair of the commission and later became the leader of the equity center, which is the primary position he held until his retirement. The studies program was made official in 2002.

Shiva Subbaraman, who worked with Jensen at the university from 2006 to 2008, echoed Sakurai’s sentiments.

“Your courage, your willingness to still get up every morning no matter what the world has thrown at you, and to advocate for all of us has been just a miracle,” Subbaraman said. “And as a woman of color who struggled a great deal to be out in this world, I will forever be thankful and grateful to you.”

Former student Joseph DeSanto Jones, who graduated in 2002, also shared his gratitude for Jensen’s work during his time at this university.

“Folks like me were able to benefit … at the university as students, as alums, as community members because of your tireless advocacy, because of your preparedness, because of the voice that you gave us — that you continue to give us,” he said.

“Nothing LGBT-wise on this campus would exist without them … everything that students do in relation to making campus better for LGBT students ultimately goes back to stuff that they’ve started,” he said. “I’m just really grateful to have known Luke.”

During the celebration, Jensen shared a video of him playing the piano. He said it was the same song playing in the hospital when his husband was being treated first for throat cancer, and then lung cancer. He died of lung cancer last summer.

In his retirement, Jensen hopes he can focus more on cultivating his love for music, specifically piano. In his absence, Jensen said he hopes both staff and students at the center can help advocate for causes such as documentation of LGBTQ+ student data through the university’s Office of Institutional Research, Planning and Assessment and installing all-gender bathrooms.

He emphasized students should focus on doing what he did when he came to this university: improving it as best as they can.

“Find your place on campus, and have great expectations, both of yourself and the institution,” Jensen said. “And you should voice those expectations … students can also leave the University of Maryland better than what they find it.”