Maryland filmmakers showcase their talent in the Spring 2021 Film Festival 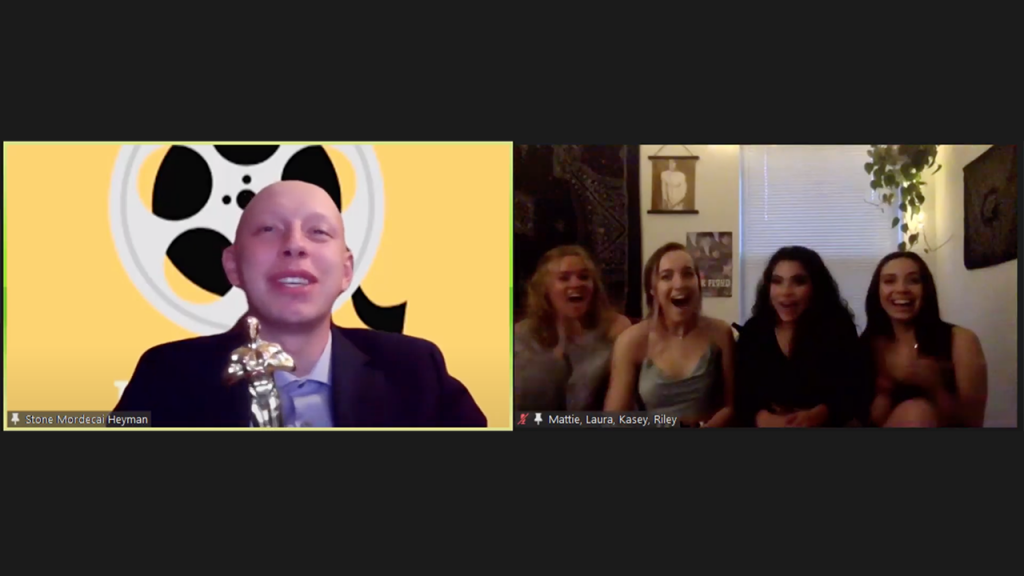 President of Maryland Filmmakers Club Stone Heyman presents Mattie Anastopulos and Laura Phillips-Alvarez with the Best Picture award for their film "Mac the Movie."(Screenshot via YouTube)

The Maryland Filmmakers Club hosted the Spring 2021 Film Festival on Friday. University of Maryland student directors showcased their latest work, ranging from thrillers to comedies to romance short films. Several awards were given out, including the best picture, best editing and audience choice awards.

The Artificial Revolution, directed by Elyas Masrour, is a documentary-style film that covers the rise of artificial intelligence in art fields, such as music and film. The film was informative and compelling, providing enough information on the subject to both inform and entertain the viewer without bogging them down with complicated and unnecessary facts. What was really on display, however, was Masrour’s talent in editing and visual design. The visuals were clean and minimalist. If someone told me this was made by a team of seasoned professionals, I would have believed them. The film looked as if it took days of editing, so it’s no wonder this film won the Maryland Filmmaker’s best editing award.

Michael Zimmerman’s humor is showcased in Haunted, a film following a ghost who tries to haunt his living girlfriend. Throw in some devil-worshipping and a talking baby doll, and this film isn’t exactly what it first seems like. Similar to Zimmerman’s last film Overthinking, Haunted demonstrates his off-the-wall sense of humor and well-written dialogue. Haunted runs at a slower pace and makes for longer stretches of buildup, but the punchlines hit the same and subvert expectations. Personally, I enjoyed Overthinking a little more for its snappier dialogue and quicker pace, but I appreciated the premise of Haunted and found it thoroughly entertaining.

Nothing Can Stop Me

Wil Morrissey’s drama Nothing Can Stop Me tells the story of a girl, Erin (Leah Corchrane), who breaks up with her boyfriend after he cheats, leading to an unexpected romance between her and a girl who approached her in a park. The film has a slow pace, but I still found it compelling because of Corchrane’s performance, which is committed and eye-catching. Most of the film is centered around the relationship between her and the girl from the park. Although the two seem like opposites at first, I liked their chemistry throughout their scenes together. I especially liked how the film keeps information about the future of Erin’s new relationship vague, letting the audience learn through the plot rather than spoon-feeding them. Overall, it’s an interesting watch and I hope to see more from Morrissey in the future.

With Love, Pops (Outside Submission)

With Love, Pops is a film about grief and dealing with the loss of a loved one. The film, directed by Emily Burroughs and Treyvon Spiva, is slow and heartfelt with almost zero dialogue. Instead, a somber song is the center of the experience, moving the viewer and controlling the pace. I loved the cinematography of this film, with its pastel-like color palette and excellent lighting. The camera work is also great, with several tracking shots that keep the pacing from feeling too slow. Combine the two and at times it felt like an A24 indie film. The film is really a lesson in showing not telling. With its short run time, it was able to deliver an impactful message of grief and acceptance without a word of dialogue. It’s the emotional core of the film that is what makes it worth watching.

The Journey for Toilet Paper

This comedy, directed by Michael Lin, follows two students as they venture to Target to get toilet paper while trying to stay safe from the pandemic. The film really leans into faux seriousness, and I loved the overly dramatic dialogue and plot. The movie doesn’t take itself too seriously, and in some ways mimics a horror-thriller throughout its run time. I especially liked the performance of the two leads, whose dramatic delivery and dialogue carry the film forward.

The ’70s are back in Mac the Movie, directed by Mattie Anastopulos and Laura Phillips-Alvarez. The film is about some groupies and a filmmaker who try to hunt down local musician and superstar Mac. Their escapades collide, leading to a surprising friendship between all of them. The film is a love letter to music and local bands, focusing on the beauty of music. The plot is excellently paced, especially in the second act. On a broader scale, the use of different locations adds to the grander feel of the film. But it’s really about music and I loved the soundtrack, which is a selection of ’70s and alternative music. The chemistry between the actors is on point throughout, and I liked seeing their personalities connect as the film continued. The ending was especially fun to watch, a concert montage featuring a real-life local band. It was pleasantly authentic and real. In my opinion, Mac the Movie deservingly won both the best picture and audience choice awards.

This thriller, directed by Jordan Resnick, follows a girl dealing with a bad breakup who meets a mirror version of herself. The dialogue is snappy, well written and the film is beautifully shot. The lead performance by Emma Bailey really does the heavy lifting. Not only does she have screen time for almost the entire run of the film, but she also plays an alternate version of herself. It’s a great performance that’s committed and compelling and drives the movie forward. It’s no wonder Bailey won the award for best actor/actress — a title I think she absolutely deserved.