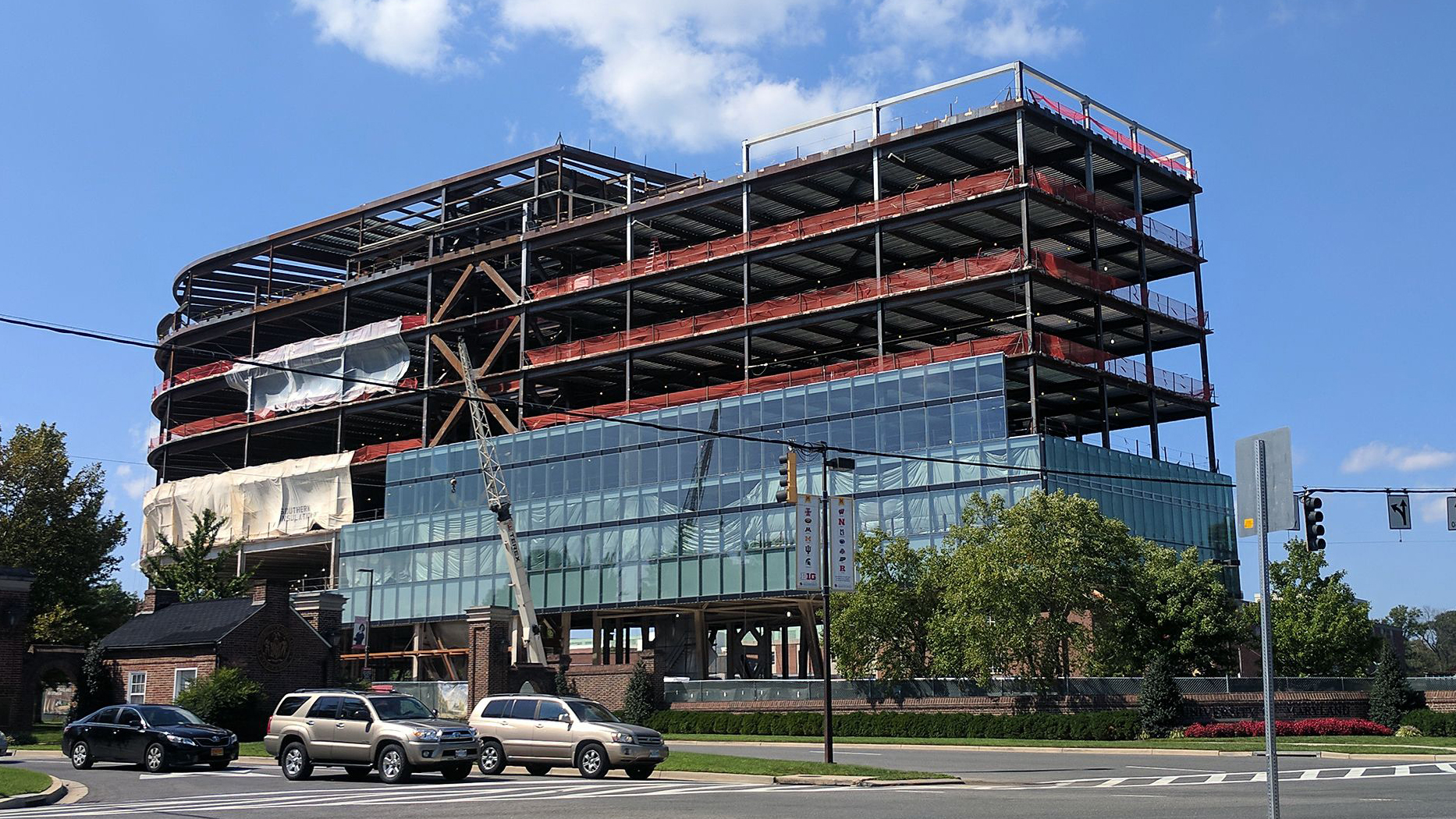 The Iribe Center under construction in 2017. (Tom Hausman/The Diamondback)

During my four years at the University of Maryland, the campuswide construction has annoyed me to no end. Some projects are small and relatively benign, but others block off entire walkways and turn 10-minute commutes into 20-minute hikes.

I know I’m not the only student who feels like I live in one big construction site. So in celebration of seniors moving on from their time in Construction Park, Maryland, I set out to see what projects seniors have found to be especially irksome during their time here.

David Pape, a fifth-year senior aerospace engineering major, is a driver for Shuttle-UM, and he said he remembers when his route along Paint Branch Drive changed constantly.

“It was weird and unpredictable,” he said.

The changes came as a result of the construction of the Iribe Center, a computer science and engineering building, Pape said. The building underwent construction from April 2016 to 2019.

I don’t venture to the STEM side of campus very often, but I avoided this area when the center was being built. The scent of unwashed computer science and math majors mixed with the smell of new asphalt was a wholly unappealing thought.

I’m glad that computer science students have a better-looking building now, though, because I took a class in the old building, and it was depressing, to say the least.

Redevelopment hasn’t only impacted shuttle drivers. Anyone who has driven in College Park knows how busy traffic can be when lanes are blocked off in places or closed entirely — especially on Route 1.

An ongoing $29 million project is bringing amenities such as bike lanes and expanded sidewalks to the about 1.5-mile stretch of Route 1 from Bagel Place to the Bowlero bowling alley. The redevelopment project has closed lanes.

Since this project started, I’ve taken to playing Pokémon Go during my commutes. There are a ton of Pokéstops along Route 1, and if I’m going to be stuck in traffic, I figure I might as well get some enjoyment out of it.

Meanwhile, Hannah Blosser, a senior communication major, has tried to avoid as much of the construction as possible.

Senior government and politics major Liz Castillo knows all too well how much of an impact annoying construction projects can have on your day. She spent two years living in Anne Arundel Hall, just down the street from Cole Field House, which has been undergoing construction since 2015.

Construction would start at 7 a.m., Castillo said. To make matters worse, the dorm often had heating and air conditioning issues, she said, so she would open her window and awaken to the loud, banging noises.

I’ve watched Cole Field House come to life. The building is just across the street from the journalism building, where I spent most of my days before the pandemic. I can attest that the constant sound of jackhammers isn’t ideal when you’re trying to study — especially when you have the attention span of an elementary schooler, like I do.

It’s good to know that I’m not just being dramatic. Other seniors seem to have the same amount of disdain for the construction, so it’s nice to be able to commiserate.

The open campus we saw on our college tours sometimes seems like a mirage compared with the construction site we’ve grown accustomed to.

While I’ve enjoyed my four years at this university, and I’ve made unforgettable memories throughout the campus, I, like many other graduating seniors, am excited to move on and find somewhere to live that looks a little more… finished.