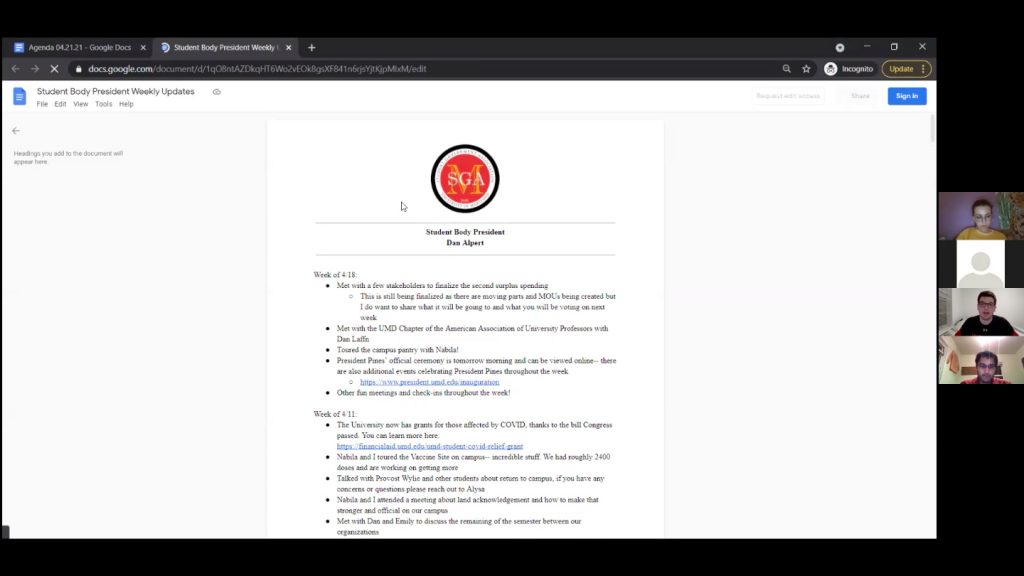 Student body president Dan Alpert delivered his State of the Campus address during a meeting on April 21, 2021. (Sofia Garay/For The Diamondback)

Student body president Dan Alpert discussed the SGA’s accomplishments and the impacts of their work during the pandemic in his State of the Campus address Wednesday.

During his speech, Alpert detailed many of the legislature’s accomplishments and emphasized their significance during the pandemic. Stepping up in a virtual environment, he said, was particularly difficult.

Alpert, who has served as SGA president since May 2020, addressed what the student group has done to create a diverse environment. He touted the SGA-backed revision of the diversity general education requirements and the body’s progress on pushing for an ethnic studies curriculum.

Alpert said these initiatives “will help create a more holistic view of diversity on our campus, and not just teach about racism, but teach students how to be anti-racist in this new setup.”

The student body president discussed the group’s advocacy for women’s health and how it has addressed the issue “unlike any other student government in the country,” he said.

Through the legislators’ work, there will be free menstrual health products in 25 bathrooms across campus for the next three years. In addition, Alpert mentioned a pilot program with the health center for free emergency contraceptives.

Alpert also commended the SGA’s work on a bill regarding student fees that was passed in the Maryland General Assembly. Legislators thought the bill was going to die in committee but it passed and is now sitting on the governor’s desk to be signed, Alpert said.

“SGA created a law that will help students across the system, across our state, ensure that student fee money is used in the way in which it was intended to be used,” Alpert added.

Concluding his address, Alpert thanked the legislative representatives and executives for their hard work and support throughout the school year.