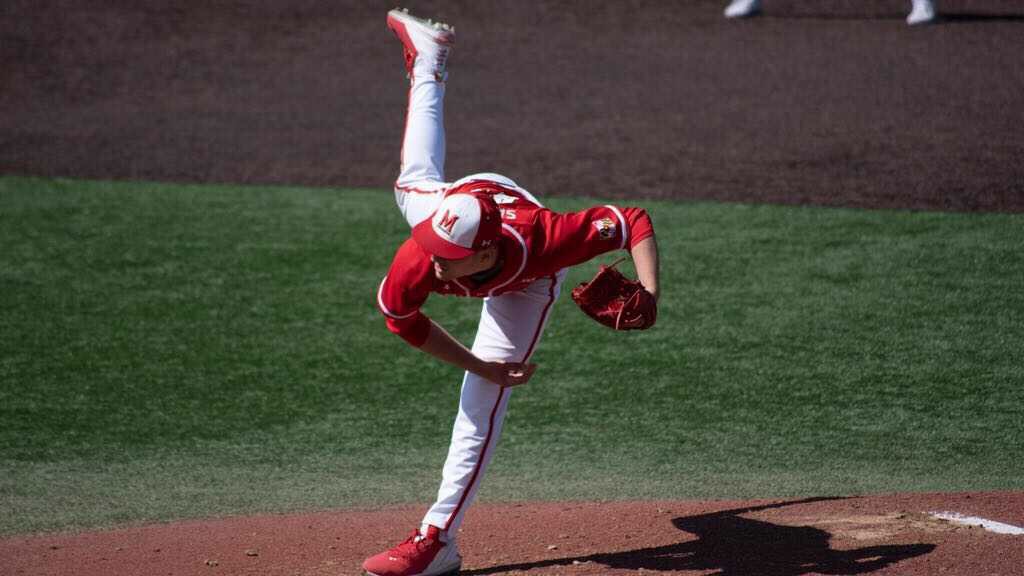 With the bases loaded and no outs in the seventh inning, Maryland baseball’s Ben Cowles strolled to the plate. Nebraska’s Shay Schanaman got ahead of the shortstop in the count, but fired a two-strike offspeed pitch that veered inside, grazing Cowles and landing in the catcher’s glove.

He was awarded first as the Terps picked up a run, cutting into the Cornhuskers’ lead.

But a furious Schanaman and his coach, Will Bolt, challenged the umpire’s call, arguing Cowles leaned in to the pitch. Bolt was tossed, and Nebraska needed to continue without its exasperated manager.

But that blowup didn’t amount to much more for Maryland, which only managed an additional run in the inning. And the Cornhuskers didn’t need their coach, slugging their way to a resounding 14-3 win over the Terps Sunday afternoon.

A crucial series win over Big Ten-leading Nebraska was on the line for Maryland, and a stellar first inning by Jason Savacool gave the Terps early momentum. But soon after, the freshman’s fortune fell sour. A leadoff single by Cam Chick started the hit parade.

Savacool zoomed three throws to first to try and pick off Chick. On all three, the tag fell short. From there, he could never find a rhythm.

Six straight slugs rocked the Terps to the tune of a five-run deficit and Savacool was relieved by Connor Staine.

“The way he went out in the first you feel pretty good,” Vaughn said. “In the second, the wheels fell off of him … just a lot of stuff left up, [velocity] dropped four or five miles per hour.”

And while Savacool wasn’t able to hit his stride in his brief outing, Schanaman certainly did.

Schanaman struck-out 11 batters in six innings, using power and control to mystify Maryland’s batters. Thanks to Schanaman, the Terps struggled to climb out of their early hole.

“He didn’t do anything we didn’t expect,” Vaughn said. “We kept looking shocked that we were getting two-strike sliders when that’s what the video showed … it’s on us as a staff.”

Outside of Chris Alleyne’s third-inning home run, Vaughn’s offense was quiet. If it weren’t for a bizarre seventh inning that saw Schanaman hit three straight Terp batters, the matchup wouldn’t have been close.

But Schanaman’s miscues injected life into a dour Maryland affair. Vaughn’s squad had found a way back, plating two runs in the seventh — one courtesy of a hit by pitch, one due to a fielder’s choice.

The Terps had a chance to tack on more runs, loading the bases with two outs. But Alleyne hit into a fielder’s choice to end the frame.

And that was as close as it would get for Maryland. Nebraska took off at the plate in the bottom of eighth, racking up seven runs to storm past the Terps.

Maryland’s bullpen toiled, giving up four walks in the inning. And with three runners already crossing the plate in the frame, a Brice Matthews grand slam sealed matters for the Cornhuskers, who flexed their offensive might amid a haze of hits and steals to clinch the series.

“You have to play really, really good to win on the road in a place like this,” Vaughn said. “Across the board, we weren’t good enough today.”