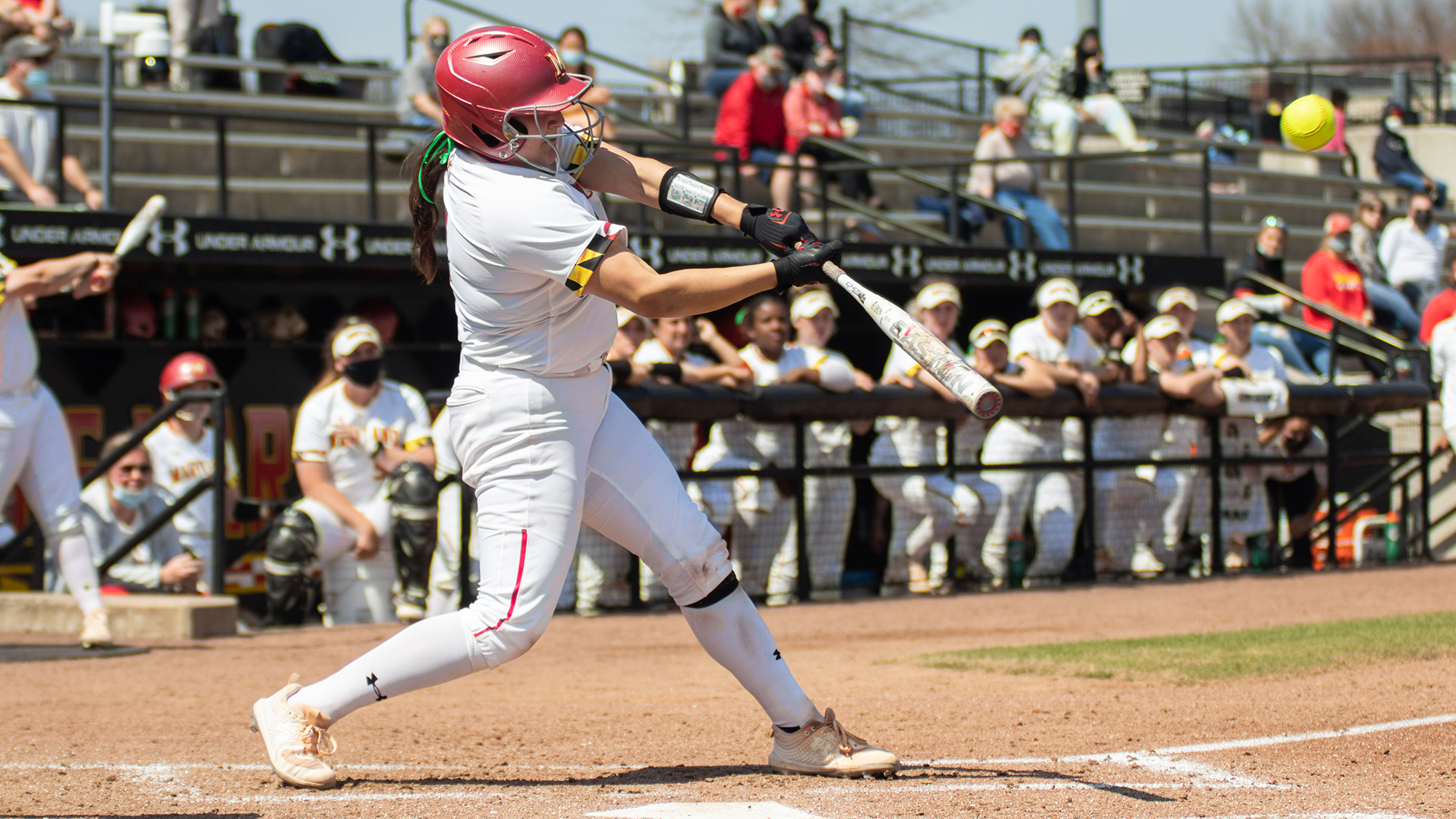 Down to her last strike with two runners in scoring position, Northwestern’s Maeve Nelson poked her bat at a fastball from Maryland softball’s Jennifer Brann. She made contact, rolling a chopper to the left side.

But the ball eluded third baseman Michaela Jones and shortstop Ruby Butler, bringing both runners home as Nelson sped into second base. That seeing-eye hit pushed the No. 24 Wildcats’ edge to three and was part of a three-RBI day for Nelson, whose performance helped her side leave College Park with a 9-4 win over the Terps.

Nelson, who was 2-for-9 on the weekend and hitting .241 entering Sunday’s contest, broke out and powered the Big Ten’s top offense to success against Maryland. Her double was part of a four-run fourth inning outburst that turned a close contest into a comfortable Northwestern (18-2) advantage.

But the Wildcats got some help from the Terps’ defensive miscues following Nelson’s knock. Jordyn Rudd drilled a fly ball to left field, sending JoJo McRae back toward the wall. The ball glanced off her glove as she reached to grab it, dropping to the grass to let Nelson score.

[Maryland softball takes one of two from Northwestern in doubleheader]

On the ensuing relay to the plate, the ball bounced away from Jones, ending up in Northwestern’s dugout. That allowed Rudd to cross the plate, pushing the Wildcats to a 7-2 lead.

The sequence helped end Brann’s first start since March 13. The Terps’ right-hander had an up-and-down return, allowing seven runs — four of which were earned — five hits and three walks in four innings while striking out just one.

“She’s a gamer,” second baseman Taylor Liguori said. “Even on some of her not great days, her presence in the circle is just felt by all the people behind her.”

The trouble started with the game’s first batter. Northwestern’s Rachel Lewis led off with a double to the left field wall, and Nelson dropped a bunt to move her over.

But Brann picked it up and sailed the ball over first baseman Regan Kerr’s head, bringing Lewis home and allowing Nelson to scamper to second. Two pitches later, Rudd boomed a double to right-center, sending the Wildcats up 2-0.

But Maryland (8-12) responded, with Gracie Voulgaris slamming a homer that curled just over the right field fence to lead off the bottom of that frame. And Jaeda McFarland cut the deficit to one in the third inning, crushing the first pitch she saw off the top of the wall for a RBI double.

The Terps got no closer, thanks to Nelson and Wildcats left-hander Danielle Williams. She rarely let frames go long, allowing four runs while striking out four in 6.1 innings. Despite the solid outing, the eight hits Williams allowed were the most she has surrendered all season.

“She’s a stud, she’s probably one of the best I’ve ever seen. Being able to run her [for eight] hits was really a boost for us,” Liguori said. “That pass the bat mentality is something we need to continue to bring.”

And Nelson’s fourth-inning double rewarded Williams, restoring Northwestern’s three-run lead and kickstarting an offensive onslaught that put Maryland away. Lewis drew a bases-loaded walk in the fifth, and Morgan Newport drilled a RBI double in the sixth to extend the Wildcats’ lead to 9-2.

A Campbell Kline RBI triple and McFarland RBI single in seventh came too late for the Terps. They left the Maryland Softball Complex with their second consecutive series loss, as Northwestern showed why it’s the Big Ten’s best.

“That’s a really good team we just got through playing that I think could very easily be in Oklahoma City for the [College] World Series,” Montgomery said.