Maryland gymnastics’ newcomers are more confident — and their performance reflects it 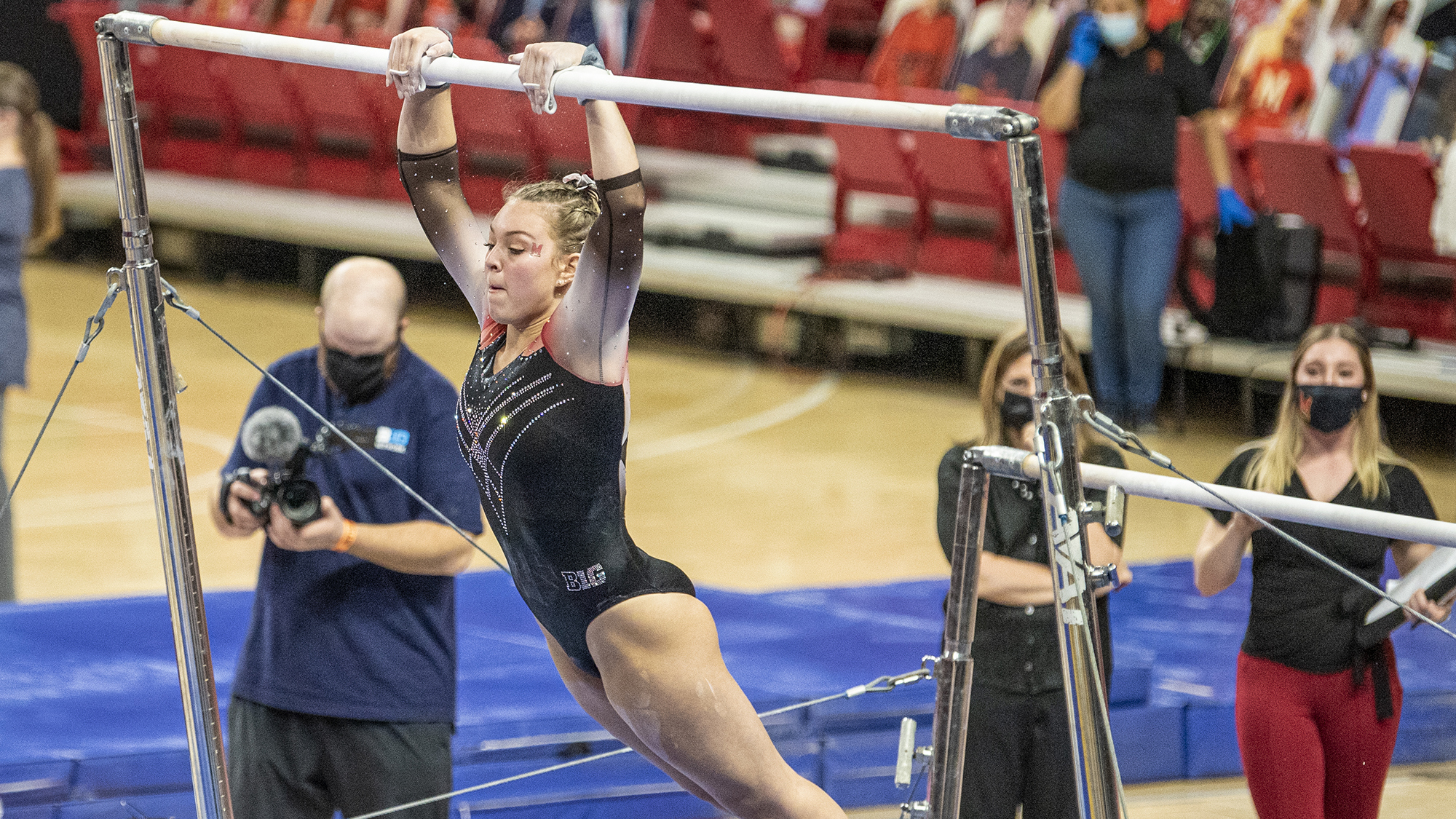 Freshman Tayler Osterhout lifts herself up the uneven bars during Maryland gymnastics' meet with Michigan on March 12, 2021. (Eric Harkleroad/The Diamondback)

Maryland women’s gymnastics’ freshman walk-on Samantha Gilbert has completed countless vault routines throughout her life. And on Jan. 17 at Penn State’s Rec Hall, she did it for the first time while wearing a Maryland gymnastics leotard.

Her ensuing score of 9.70 was good for a freshman who didn’t even know she would be on the team. And it showed where there was still room for improvement in Gilbert’s game.

For Gilbert, that routine was the ultimate culmination of years of practice and several months of additional preparation under the guidance of coach Brett Nelligan, all part of helping Gilbert and the Terps other freshmen adjust to a competition environment very different from that at the high school Junior Olympic level.

“It’s an adjustment period. You have to adjust to that college level of gymnastics, which some people get right away,” Nelligan said. “For others it’s a longer process, and that’s fine. Like Sam … got better as the year progressed.”

And for many of Maryland’s freshmen, the toughest adjustment is making the sport about more than what they can individually do in the gym. The transition to NCAA-level gymnastics means contributing as much as possible to the team’s score, an aspect of competition that is not introduced before getting to the college level.

With that pressure comes plenty of nerves for newcomers. But Nelligan and his coaching staff have instilled a fresh mindset into the Terps’ youngsters that helps them focus on continuing to get better.

“Now I’ve learned to kind of mentally prepare before my routines and visualize me doing well,” Elizabeth DeBarberie said. “Our coaches are always telling us, ‘Don’t cross your fingers or do anything like that. If you want something you have to go out and get it.’”

Reminders like this have helped the Terps’ freshmen grow their confidence and trust themselves and their training throughout the season.

Still, there were challenges. The development of some of this year’s freshman Terps was stunted by injuries. Alexa Rothenbuescher, who was once a top recruit in the nation, had not competed since 2018 because of back injuries. Kristen Quick needed surgery on a dislocated finger during the preseason. And DeBarberie, who competed on the uneven bars early on in the season, has had to battle hip and groin ailments in recent weeks.

Without the chance to gain much competition experience, setbacks like these can have a major effect on a young gymnast’s progression. Unlike an upperclassman, a freshman cannot just jump right back into the thick of things after recovering from an injury. The process of getting acclimated to the team and environment starts all over again, Nelligan said.

“If they were maybe returners that had competed [with] a year of competition under their belt, you pick it up kind of quick,” Nelligan said. “But your freshman year, you kind of really need a lot of those things to go right so that you connect your training time.”

But Nelligan remains pleased with what he has seen from his freshmen so far, and for good reason. During the Big Ten championship on March 20, Gilbert earned a stuck landing en route to a season-best score of 9.85.

And glimpses into the growth of Maryland’s freshmen throughout the 2021 season did not stop there on that day. Tayler Osterhout notched a 9.80 on the uneven bars, and Olivia Weir helped the cause with a 9.70 of her own.

The growth of Maryland’s freshmen leaves Nelligan confident in his team’s future. He recognizes he will need to expand their roles with Audrey Barber, Sabriyya Rouse and Collea Burgess all due to graduate.

DeBarberie and Osterhout have flashed potential on all four events during the Terps’ team practices, and the highly anticipated returns of Rothenbuescher and Quick seem destined to have an immediate impact on Maryland’s lineups next year.

The promise of the youthful Maryland squad is evident, and looks to carry forward into the next few seasons has been recognized by the likes of Barber, who faced similar difficulties of adjusting to the college level and understands how injury can impact a gymnast’s development. With a talented and driven freshman class making its mark for the Terps, she’s excited to see what comes next.

“Once you get more comfortable and you get more adjusted to how college competition is, you just kind of take off. I’m excited to see them continue this takeoff and just be the team I know they can be,” Barber said. “They’re already amazing this year … and I’m excited to get to watch them.”