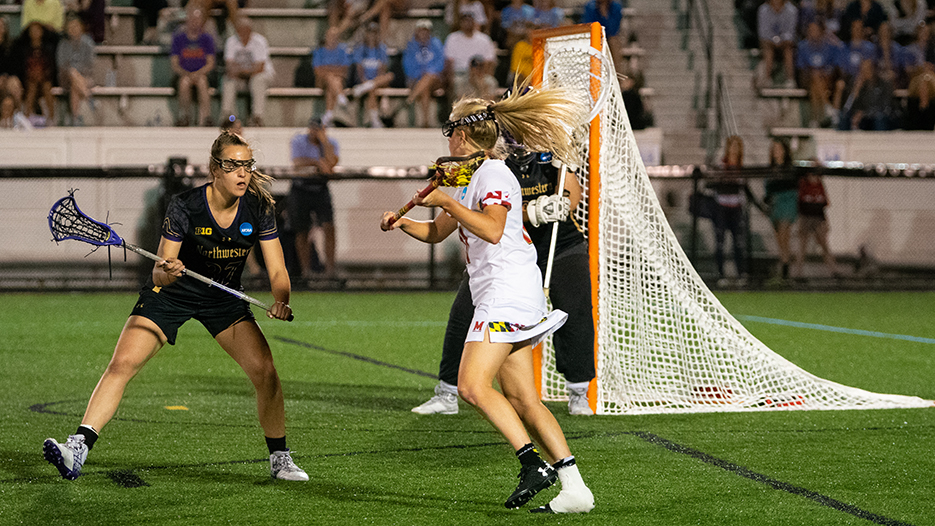 The last time Maryland women's lacrosse played Northwestern was in the NCAA tournament semifinals back in 2019. The Terps walked out 25-13 winners en route to a national championship. (Tyler Ecker/The Diamondback)

Even in a season unaffected by a pandemic, Maryland women’s lacrosse and Northwestern seem destined to clash more than once every year.

As two of the nation’s top programs, both squads have gotten to know one another after years of postseason matchups. Since the Terps joined the Big Ten, they have met the Wildcats more than once in four different seasons, including three meetings in 2019.

Now, No. 7 Maryland (5-1) finds itself headed to Evanston, Illinois, for a weekend series with No. 3 Northwestern (7-0) for two battles with serious postseason implications.

“They are on fire,” coach Cathy Reese said. “They have such a high scoring offense, their defense is aggressive and tough, nothing different than what Northwestern has been over the years.”

The Wildcats represent the toughest challenge for the Terps to date. Northwestern has been utterly dominant this season, boasting the second-best offense in the country and the best scoring defense in the Big Ten.

It’s a bit unusual for Reese’s squad to enter the matchup as the lower-ranked team. The last time that happened was the 2012 NCAA semifinals, when No. 2-seed Northwestern booted No. 3-seed Maryland from the postseason.

But the Terps have commanded the rivalry since Reese took over in 2007. She holds an 11-4 record against the Wildcats, including a 9-1 edge since joining the Big Ten.

“Obviously going into Northwestern provides a different challenge … the emotions that go into a game like this,” Reese said. “Not only is it a top-four opponent, but it’s been a team that has had such success on the national stage over the past years, and a lot of our competitions on that stage have been Maryland, Northwestern.”

If Maryland wants to continue its five-game winning streak, it will need to find a way to solve the attacking tandem of Izzy Scane and Lauren Gilbert. Scane, the top goal scorer in the country, and Gilbert, the third-highest, have lit up opposing defenses, combining for 77 goals in seven games.

Meanwhile, the Terps have scored a total of 76 goals through six games.

“Izzy Scane is something special,” Reese said. “She is so fun to watch and to be honest, I love watching her play. She gets the job done as well as Northwestern’s offense.”

The junior was a force during her freshman season, the last time the Terps faced her. Back in 2019, Scane put away 12 goals in the squads’ three meetings.

Gilbert has had her fair share of goals against Maryland, too, with five tallies in 2019. But Megan Taylor blanked the attacker in the 2019 NCAA tournament semifinal en route to a 25-13 Terps’ victory, saving all three of her on-target shots.

Still, Maryland possesses the best defense Northwestern has drawn to this point. The Wildcats have rocked every opponent, averaging 20 goals per game. Yet, the Terps’ defense has only improved since the beginning of the season.

“Every game we’re just getting better, and it’s translating from practice to games,” captain Lizzie Colson said. “We’re getting more comfortable with the young defense and new defensive lineup.”

Colson has led the way for Maryland’s defensive unit, not only as a leader, but as an assertive force against every attacker she’s come up against.

“That’s my defense around me,” Colson said. “That’s them making me look good. That’s [Shaylan Ahearn] on the draw putting it where she knows I’m going to run on to it.”

Colson is expected to be a key factor in trying to halt that relentless Northwestern attack. And she’ll have to do so on short rest.

The sides will first meet Saturday afternoon, before rematching on Monday.

“It’s definitely difficult, even just physically to play two games in that short amount of time,” attacker Hannah Leubecker said. “But it is nice from a strategy standpoint because you’re playing the same team so you get to make adjustments from the first game.”

Still, all eyes will be on the Terps and Wildcats this weekend. The Big Ten’s top spot is wide open, and whichever squad can get the advantage will have the inside edge the rest of the way.

“It’s a really tough matchup,” Reese said. “But we’re ready for the challenge, we’re ready to face a team as strong as they are.”