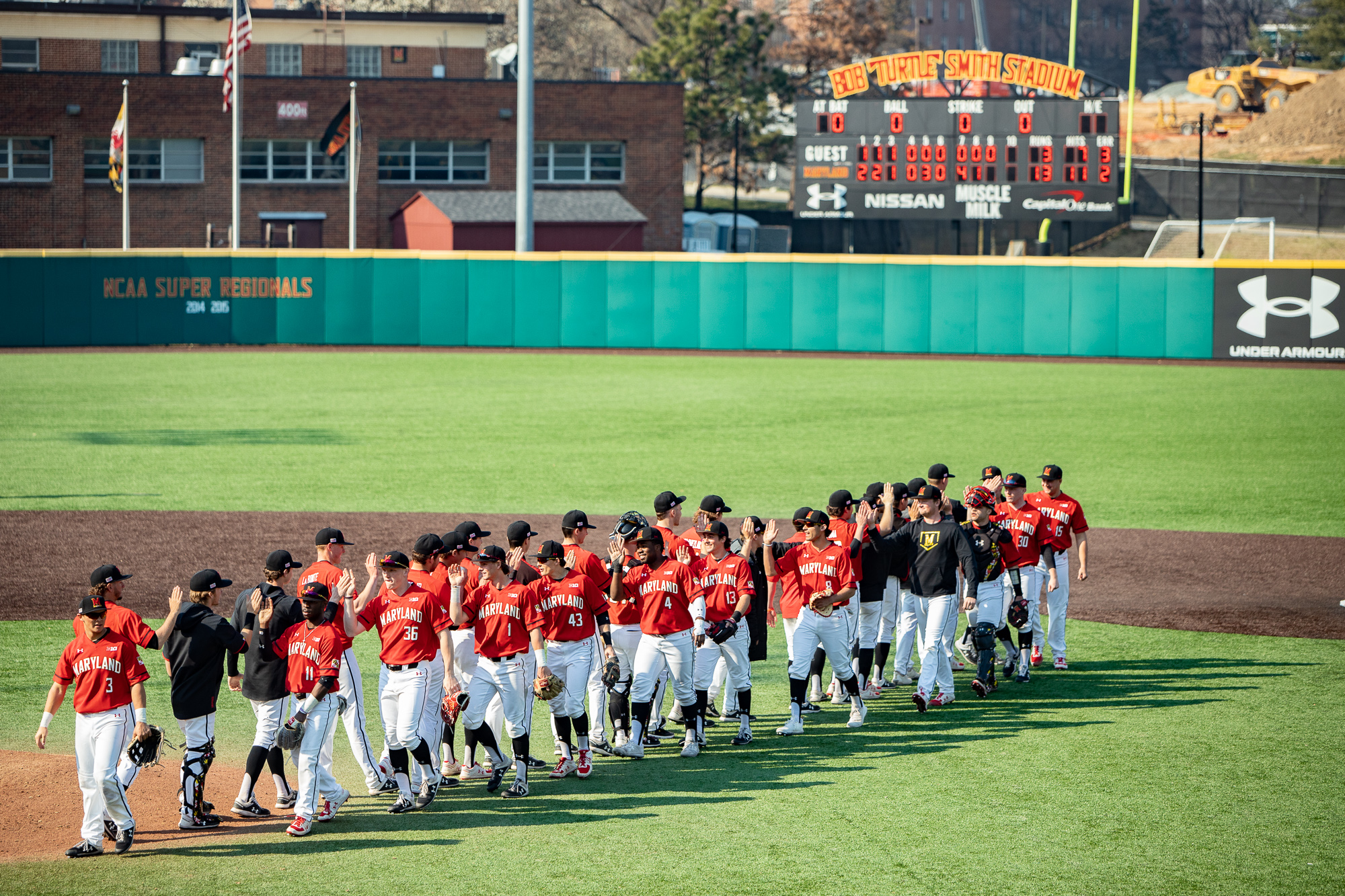 Maryland baseball found itself in a tough situation against Michigan State with a man on third and just one out.

The Terps had claimed an early lead and needed to show they could hold their edge over the Spartans after coughing up a four-run advantage the day before.

Up one with a runner on third, freshman pitcher Jason Savacool punched out his next batter, recording his first career strikeout. Then, he forced Dillon Kark to weakly ground out, getting Maryland out of danger.

The Terps relied on a strong first career outing from Savacool and a much-improved fielding effort to earn their first win of the season, 3-2. It was much-needed redemption after dropping their first three games to Michigan State.

“That guy pitched like he had been in college for four years,” coach Rob Vaughn said.

Savacool, the 2021 Baseball America Big Ten Preseason Newcomer of the Year, had an impressive showing, pitching a complete game while giving up one earned run and recording two strikeouts.

“I was trying to get through as much of the game as I could,” Savacool said. “Ended up a couple of bounces go our way and I got a [complete game]. It was super exciting.”

[Maryland baseball drops both games of doubleheader with Michigan State]

Maryland was able to get on the board in the second inning, turning a leadoff single from Bobby Zmarzlak into the opening run of the contest. Maxwell Costes walked on a long at-bat before Luke Shliger and Troy Schreffler were able to advance Zmarzlak home on a sacrifice fly.

The Terps tacked on a second run in the third inning from Ben Cowles. A leadoff hit from the junior shortstop and a kind drop into left field from Randy Bednar gave Maryland a 2-0 lead. And they would not relinquish that edge for the remainder of the game.

The Spartans were unable to get going against Savacool and the Terps’ defense early. After Zaid Walker could not turn his leadoff double into anything in the second inning, Michigan State was unable to get another runner into scoring position until the sixth.

That frame gave the Spartans their first run of the day, advancing Bryce Kelley to second before Zach Iverson knocked him in. Iverson gave Savacool a tough time, going 2-for-4 with an RBI.

Maryland responded instantly, leaning on another leadoff hit — this time from Shliger — and a clutch two-out knock from Cowles to bring its lead back to two runs.

Michigan State was able to get its run back in the next frame, exploiting an error from the Terps’ defense as Matt Shaw’s poor throw sent Brock Vradenburg to second. The next two Spartan batters were able to bring Vradenburg in to cut the lead down one more time.

Cowles almost spoiled the Maryland lead in the eighth, skewing his throw to first and letting a runner on with one out. However, he made up for his error two batters later, stretching to grab an errant throw from Shliger to pick off the would-be tying run.

Savacool took the mound in the ninth inning, already with an impressive performance. But, the freshman got Spartan batters to bite on pitches early and put away the game and the win for the Terps.

“He was unbelievable,” Cowles said. “That’s a big spot for a freshman to come in.”