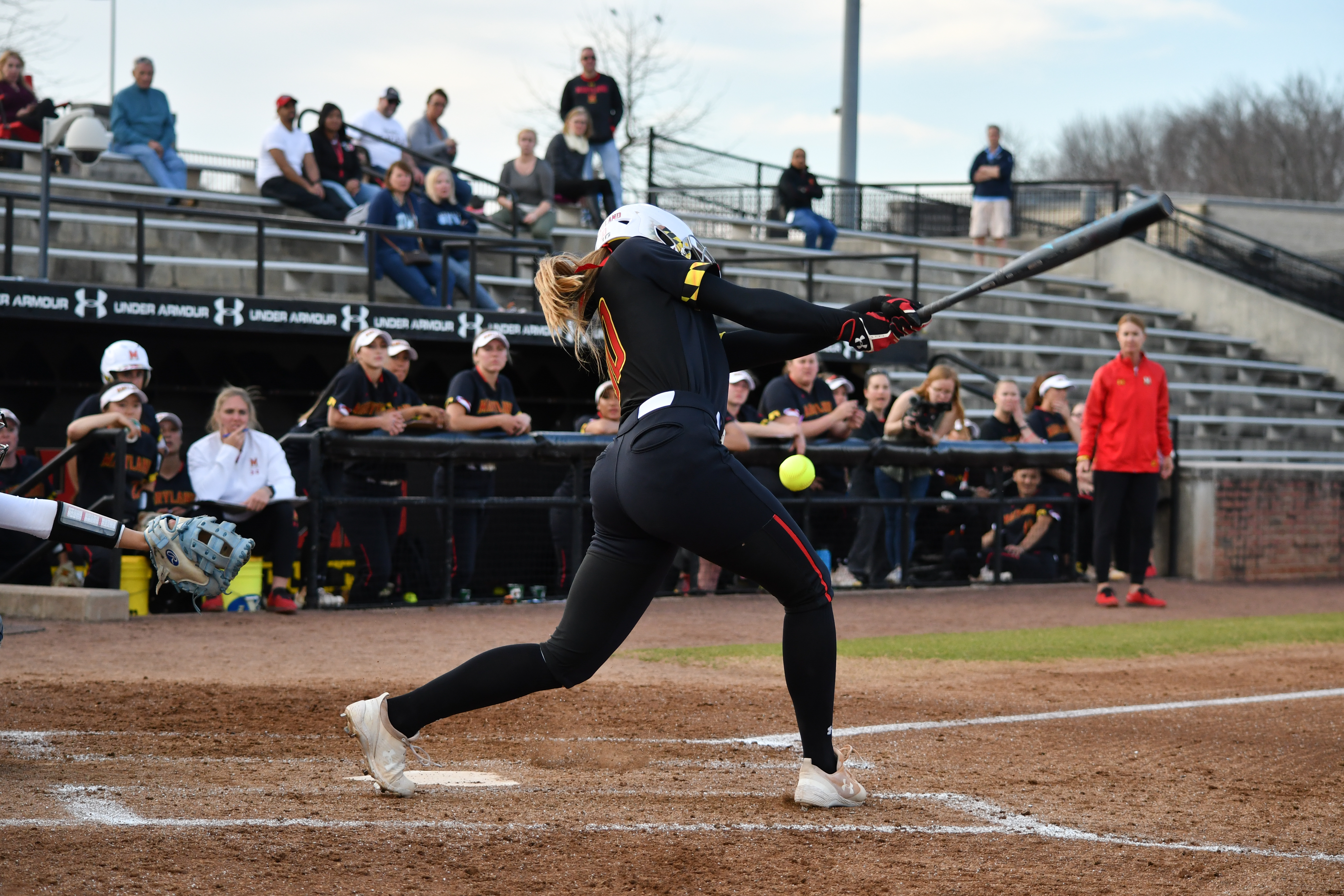 Haley Ellefson is used to missing bats, not swinging them.

But with Maryland softball down a run to Wisconsin extra innings and two runners in scoring position, the Terps placed all their hopes onto their junior pitching ace.

And she delivered. Ellefson singled, driving in lead runner Ruby Butler to tie the game.

Two batters later, Maryland was celebrating, having earned a walk-off victory over the Badgers.

It was an exciting end to what was a difficult day for the Terps, who struggled to mount much offense against Wisconsin’s pitching. Still, Maryland found a way, splitting its doubleheader with the Badgers Sunday afternoon.

“They played hard. We never gave up and we fought every out, and that’s all you can ask of them,” said head coach Mark Montgomery.

The first game offered few opportunities for either side, a prelude of what was to come.The defense and pitching was dominant, though, particularly for the Badgers.

Wisconsin was up 1-0 in the top of the sixth. Campbell Kline was in the box with Micaela Abbatine on second and Butler on first with no outs down.

With the Badgers’ infield stretched to cover Maryland’s runners, Kline laid down a bunt. She had seemingly caught Wisconsin by surprise, sprinting into first to load the bases. But that bunt spun foul, and Kline was back in the box.

She swung at the next pitch. The ball popped off of the bat into the infield, falling into Fiona Girardot’s glove. With Abbatine unable to get back to second base, Girardot stepped on the bag, notching two outs for the Badgers.

Then, in one smooth motion, Girardot hurled the ball to first, getting there before Butler could track back to the bag. Wisconsin had turned a triple play, denying the Terps a golden scoring chance. It was one of few opportunities for Montgomery’s squad, which struggled to create much of anything at the plate.

The Badgers’ fielding wasn’t always firing on all cylinders, though. In the fifth frame, McFarland and Taylor Okada both got on base after consecutive errors in Wisconsin’s infield.

McFarland had a standout day at the plate with a double and three singles in the first game. However, Maryland couldn’t quite find a way to drive her in during the first game, the rest of the roster racking up just five hits.

“[McFarland] plays with the poise of an upperclassman and she’s gifted with all of the tools,” Montgomery said, “She’s fast, she’s strong, she has a high softball skill set. I mean, there’s just very little she can’t do and it was on display.”

And although Wisconsin’s offense stalled for much of the opening game, a brief third-inning rally was the difference. Infielder Skylar Sirdashney stroked a ball past the Terps’ infield, earning herself a double.

And with two outs, Girardot turned provider, driving the ball into the outfield to score Sirdashney — the decisive run in a game of few chances.

In the second contest of the day, the offensive woes continued.

The Badgers had a chance to clinch a victory in the top of the seventh. Infielder Lauren Foster smoked a single into left field. Then, Schlotterbeck walked Megan Donahue, giving Wisconsin two runners on — with only one out on the board.

Abby Herbst singled up the third-base line, and Michaela Jones took out the leading runner at third. Christaana Angelopulos went down at first, and Wisconsin lost its chance.

The Terps found themselves in extra innings for the fourth time this weekend with zeroes on the board.

With Gabi Carra on third, Sirdashney smashed the ball into left field, scoring Carra for Wisconsin’s only run of the game.

The Terps had a chance to win. And they took advantage of it.

With Ruby Butler on third and Schlotterbeck on second, Ellefson singled up the middle and pushed Butler over the plate for Maryland’s first run of the contest.

With Kerr at the plate, Schlotterbeck on third and Ellefson on second after a steal, the pressure was mounting for Wisconsin pitcher Maddie Schwartz.

Schwartz was rattled, walking Kerr and loading the bases for McFarland. The freshman outfielder was ready to go down swinging, fouling off pitch after pitch.

Then, she hit one in the right direction. McFarland drove the ball into deep left field.

Schlotterbeck, who only gave up one run all game, scored the winning run in extras. Screams rang from the dugout, and McFarland was swarmed by her teammates.

The Terps walked it off in the eighth frame, finishing their first weekend of the season in the most dramatic way possible.

“For having the last 11 months off and facing three NCAA regional teams, one that was at the World Series, I think we did really well,” Montgomery said.