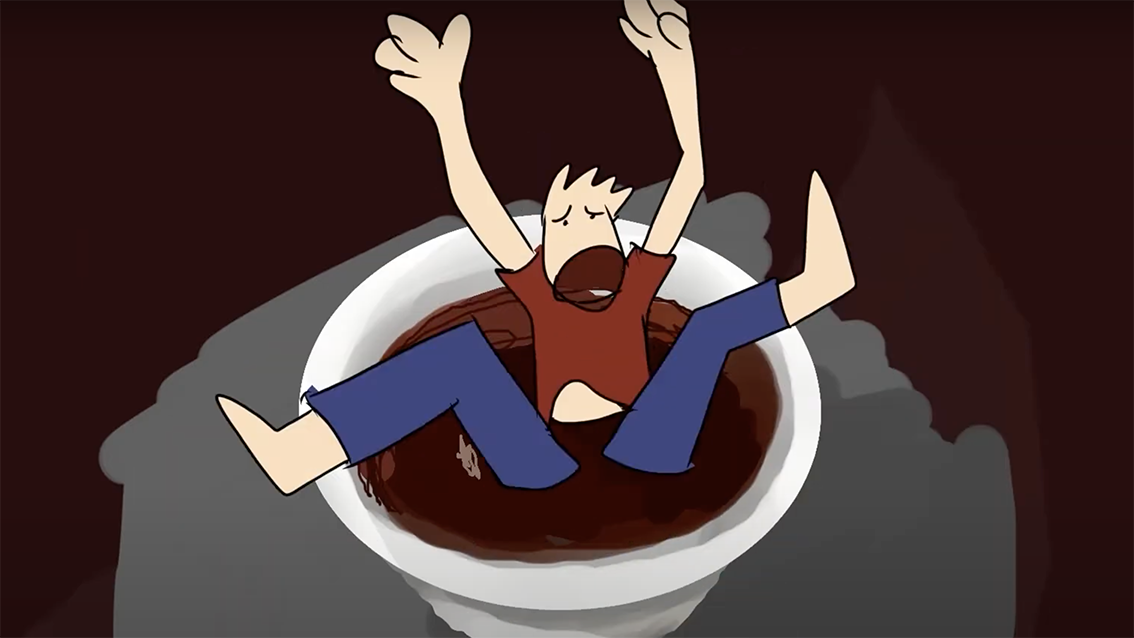 'Overthinking' revolves around buying a cup of coffee. (Screenshot via YouTube)

The Maryland Filmmakers film festival took place Wednesday, showcasing a wide range of student-created movies. From casino robberies to the life-changing decision of whether to get coffee, these short films showcased the creativity and artistry of filmmakers at the University of Maryland. Here’s what I thought of the films.

Taste of It, directed by Elaine Li

The first film of the night, by Elaine Li, an alumna of this university, tells the story of two siblings as they plan a casino robbery. The plot and dialogue are cryptic, showing what could happen in the future. So while I understood the basic gist of what the two were planning, I never really understood their motives or end goals.

What stood out the most for me was the visual style and cinematography, which blended beautiful, crisp shots with some subtle editing to make even the most mundane motions captivating. Overall, I could tell that Li’s style was fully realized in this film, and I was thoroughly impressed with the cinematography from beginning to end.

The Auteur, directed by Stone Heyman

Filmed in the style of a mockumentary, The Auteur is a satirical look into the life and work of one pretentious, arrogant director: Stone Heyman. Starring in his own film, Heyman plays a director with a gargantuan ego.

I saw many similarities between this project and The Office, from the faux seriousness of the dialogue to the absurdity of Heyman’s character. He most resembled Michael Scott, which was clear from how all of his co-workers hated him. I loved one particular scene where Heyman sits down with an actress and tells her to repeat her lines about 15 times, over and over again. That one scene is the film in a nutshell: absurd, silly and absolutely hilarious.

The Sound Behind, directed by Robert Wolle

One of the more serious films was The Sound Behind, a story about a person plagued with anxiety and tinnitus. The film took place mostly in the main character’s room, following them as they attempt to escape a haunting ringing in their ears. There’s very little dialogue, leaving room for an impressive score and accompanying sound design that also came from the director himself.

The film’s recreation of tinnitus itself was stellar, immersive and even overwhelming, at times. I especially liked that many scenes drew inspiration from horror movies, using lighting to emphasize the person’s feeling of being overwhelmed. Wolle did a wonderful job with the soundtrack, which felt eerie and unsettling in a way that perfectly matches the tone of his scenes.

Last was Overthinking, a film with a self-explanatory title. The film follows an indecisive student as he tries to decide whether to get coffee, which in his eyes, is one of the most important decisions of his life. I loved the tone; it doesn’t take itself too seriously and really leans into the absurdity of overthinking.

Our protagonist thinks of every consequence possible of getting coffee, from failing a test and becoming homeless, to running into a girl who would become the love of his life. The actors have great chemistry, and I especially loved the quirky, confident energy of the lead. I also liked the bit of hand-drawn animation in the film; it was the cherry on top of a funny, lighthearted movie about something as simple as a guy getting a cup of drip.

If you’d like to check out these movies yourself, you can watch them on the Maryland Filmmakers’ YouTube.

[Review: Get your fix of punk music with For Your Health’s new album ‘In Spite Of’]