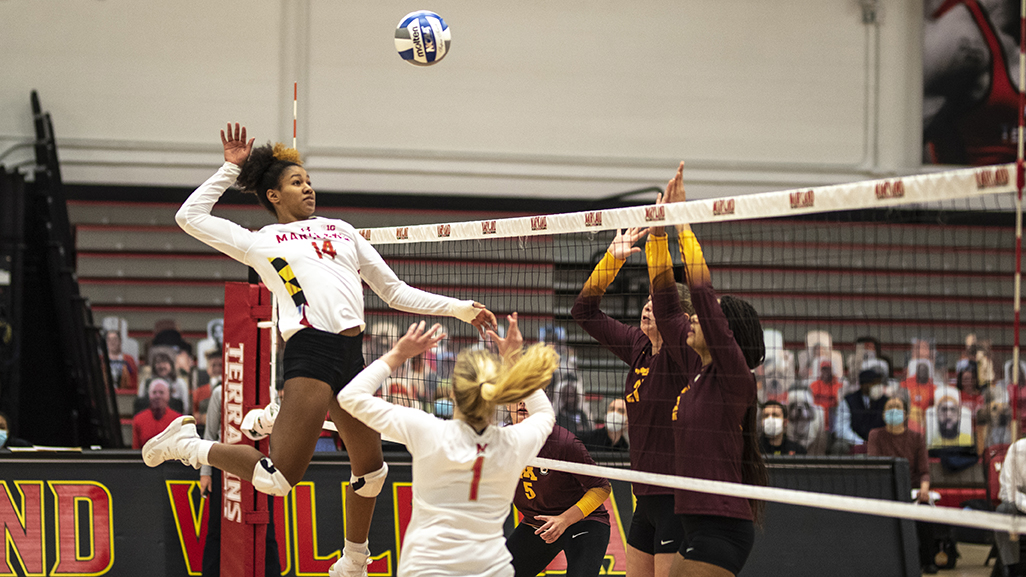 Early in the third set of Maryland volleyball’s loss against No. 7 Minnesota on Saturday, outside hitter Rebekah Rath collected a spiraling serve in the back row, before passing the ball to setter Nicole Alford to set up a potential kill opportunity.

As Alford redirected the pass high up in the air, preseason All-Big Ten honoree and senior captain Erika Pritchard looked poised to attempt yet another kill. Yet, when the ball was smacked away to the opposite corner for a Maryland point, it wasn’t Pritchard who earned the impressive putaway.

It was middle blocker Cara Lewis.

Lewis, who played sparingly in her freshman season with the Maryland volleyball team, has carved out a role for herself in College Park this season. She’s started for the Terps (0-4) in every match thus far in the middle blocker position — and thriving in her spot.

“I feel like I’m doing really well with my team,” Lewis said. “It is a big step, but I know that my teammates have my back, so I feel more comfortable being on the forefront.”

[Despite loss, Nicole Alford showed out for Maryland volleyball against Minnesota]

Coach Adam Hughes said Lewis built her confidence on the court over the course of her freshman season, where she learned under experienced middle blockers Rainelle Jones and Katie Myers.

“Cara was in a role last season where we were pretty solid in our two middles,” Hughes said. “But I think, at times, the nice part about that is you get to go up against two of the better middles in the conference, and I think that kind of helps her in her development.”

Hughes attributed a lot of Lewis’ development to Jones, who became a mentor for Lewis as a young player on the Terps’ lineup.

Hughes said it was during practice when Lewis sharpened her skills with Jones.

“It’s been fun to watch those guys go out and practice,” said Hughes. “They do a good job of battling against each other, and that’s important, you know, you gotta do it the right way.”

In Friday’s contest against Minnesota, her improvement was evident.

Lewis, whose previous career high in kills was two back in 2019, accounted for five kills in Friday’s loss against Minnesota. Lewis also pitched in three blocks on the evening, and posted a team-high .556 hit percentage.

She will look to expand on those numbers this week, as the Terps travel to take on No. 4 Nebraska for their next doubleheader.

“Watching how Nebraska plays will help us a lot on our game so we know what we have to execute on,” Lewis said.