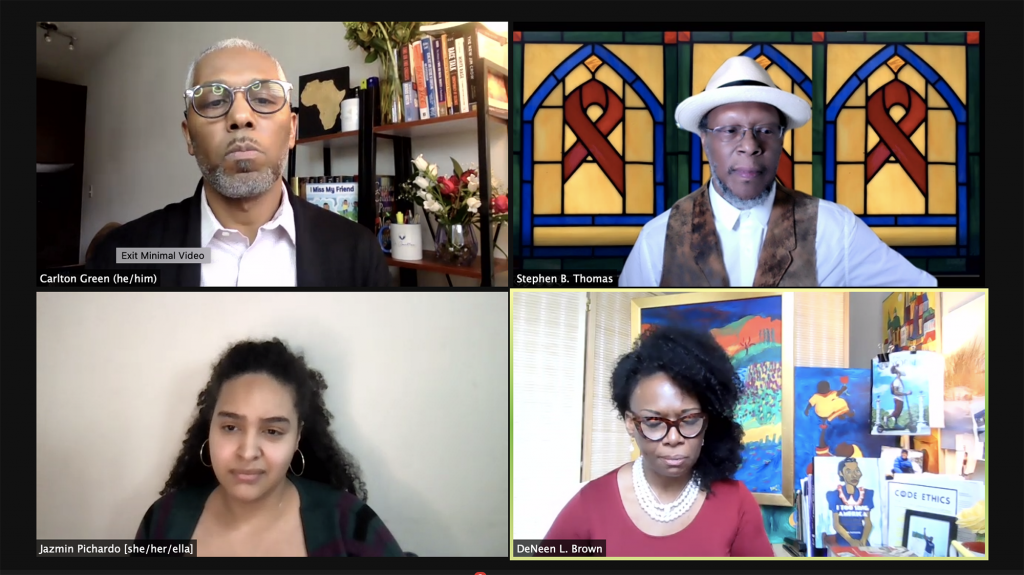 A panel of University of Maryland professors and staff met virtually to discuss medical racism on Jan. 27, 2020. (Victoria Ebner/For The Diamondback)

Professors and staff at the University of Maryland discussed the history of medical racism that has plagued people of color both in the past and the current age of COVID-19 at a virtual panel Wednesday.

The latest installment in the Office of Diversity and Inclusion’s anti-racism teach-in series, the event began with a medical experiments timeline and discussion of the discrimination imposed on people of color over time and connected it to COVID-19 vaccine hesitancy in certain populations.

“There are significant numbers of people of color who are actually thinking in terms of not taking the vaccine,” said Carlton Green, the office’s diversity training and education director. “If we were to categorize Indigenous nations as sovereign nations, then they would probably be ranking at the highest level of those countries that are being affected by COVID-19.”

People of color are dying of the virus at an alarming rate compared to white populations, Green added.

However, Green explained, many of these groups are hesitant to trust the COVID-19 vaccine due to a persisting culture of medical racism. Green cited a number of examples, including doctors who sterilized women of color without their knowledge and medical schools advertising to students that, if they attend, they can operate on previously enslaved Black people.

“There has been a long history of racism within medical care settings,” Green said. “And we know that it persists today to the degree that people of color often worry about being experimented on or the fact that they don’t necessarily always have their needs or their concerns explored.”

DeNeen Brown, a professor in the journalism college, also mentioned the practices of performing excruciatingly painful experimental surgeries on Black women and the infamous Tuskegee syphilis study, in which researchers looking to examine the decline of untreated syphilis tricked hundreds of Black men into signing up by telling them they would receive free diagnosis and treatment. Researchers, instead, never told those who had it and gave them placebo medication, watching them die, Brown explained.

These medical injustices throughout history have caused lingering concerns in communities of color about whether they can trust those in the medical field.

“There’s always that suspicion that they want to kill us,” Brown said.

And getting the COVID-19 vaccine is a perfect way to avenge atrocities like Tuskegee, said Stephen Thomas, a panelist and public health professor.

“The lesson of Tuskegee is not that Black people are afraid,” Thomas said. “The take-home message is to make sure that we don’t do what was done to them. They were denied treatment … we should demand access to this vaccine.”

It’s important experts find effective ways to combat disinformation and build reliability, Thomas said, like having people in those communities — such as barbers or salon workers who many already trust — to change their minds.

“Our communities are getting disinformation and we have no countermeasures to help them demystify,” he said. “We have an opportunity now, but it is not forever.”

Students going into the medical field should be aware of medical racism history and companies should be motivated to create more inclusive spaces, Brown and Thomas added.

“It’s imperative that medical schools, hospitals, clinical spaces, start working on the physicians and the practitioners to become more aware of what it is that we are feeling from 400 years of oppression and racism that’s still going on,” Brown said.

Right now, though, Brown emphasized that people of color still have a lot to worry about — and the issues plaguing communities of color run deeper right now than just the threat of COVID-19.

“Black people are dealing with two viruses right now, the virus of racism that has reared its ugly head again … and the virus of COVID,” Brown said. “It’s coming at them from all angles, and all they can do is survive.”