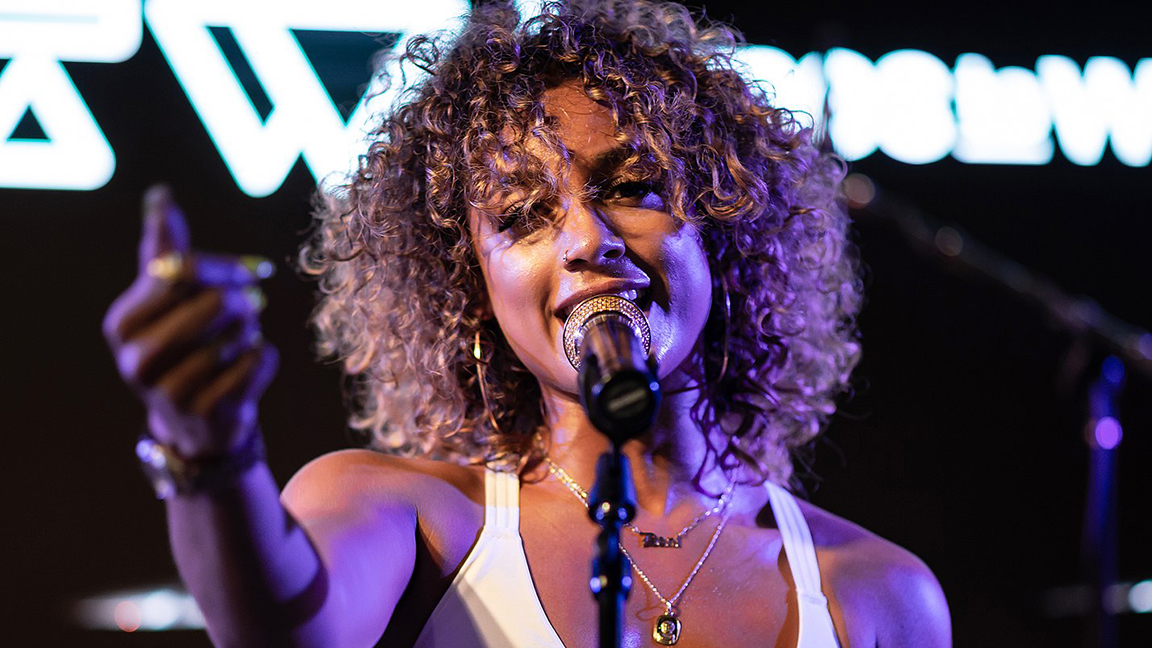 DaniLeigh performing live at the Ones To Watch "All Eyes On..." showcase at Live Nation in Beverly Hills, Los Angeles, California, on Wednesday, July 11, 2018. (Photo via Wikimedia)

“Yellow Bone That’s What He Want.” The caption looms there, an unsightly mark below a 12-second Instagram video posted by singer-songwriter DaniLeigh. In it she appears to be having her hair and makeup done, and as she playfully dances along in full glam to a snippet of her newest track, she mouths the lyrics: “Yellow bone that’s what he want.”

But the term “yellow bone,” most commonly used in African American vernacular English to refer to Black women of lighter complexions, is not an innocent one. It’s a term saturated with historical and cultural meaning within the Black community and beyond, and has been used to exalt skin closest in proximity to whiteness.

To further complicate the situation, DaniLeigh’s racial identity has been brought into question. People speculate — given her parents’ phenotypic expression — that DaniLeigh may or may not be a Black Latina, as she has claimed before.

More important than dissecting her racial identity, however, is acknowledging the ease with which she, and many public figures like her, are able to fall into a performance of Blackness a-la-carte; picking and choosing certain aspects of Black culture to replicate while disposing of the rest.

Her ability to slip in and out of this performance when convenient — and inconvenient — speaks to the privilege of racially ambiguous individuals that is never afforded to visibly Black Americans, Latin Americans and people worldwide.

The issue is larger than a single or few songs — it’s about the desirability hierarchy that exists in the world, which places people of lighter complexions at the top and those of darker skin tones at the bottom.

This is about colorism, a sinister appendage of anti-Black racism that systematically deems those with lighter skin complexions as more favorable. We must address colorism openly and acknowledge that doing so won’t somehow disband the efforts of Black people and other people of color toward acceptance and representation.

This is about featurism, another byproduct of racism, and colorism’s lesser known but equally destructive cousin, which places European features and standards of beauty on a pedestal, regardless of race. Smaller noses, looser hair patterns and ultimately lighter skin tones are among the characteristics deemed more desirable according to the hierarchy.

The implications extend far beyond the music universe into a global phenomenon. Colorism is the reason there is a market for skin-whitening creams. It’s the reason terms and historical practices such as “the paper bag test” exist. It’s the reason representations of Black beauty in media are often reduced to only a few Black actresses of lighter complexions, such as Zendaya and Zoe Saldana.

People of lighter complexions, regardless of race, get paid more, are more easily able to purchase a home and have more positive experiences with law enforcement. Even objects as mundane as Band-Aids and “nude” colored clothing become points where racism and all its byproducts bleed through.

If you’re paying attention, the effects of colorism are all around and should come as no surprise.

“Why can’t I make a song for my light skin baddies?” DaniLeigh tweeted in a post that has since been deleted.

This is not about cutting down Black women of lighter skin tones or women of color. It’s about using the privileges of our racial ambiguity to make space for women and femmes of darker complexions and Afrocentric features. To put it simply: Women of lighter complexions and ambiguous racial identity don’t need another song of praise — we don’t need an anthem. Racism has already made it so that we are favored in our daily lives.

Media and entertainment should actively reflect those pockets of Black experience that it’s so set on erasing or overlooking. We need more films and TV shows showcasing love between two people of darker complexions and songs eliminating language that only affirms colorist and featurist ideologies. Collectively, we should be focusing on uplifting those in our community who have bared the greatest burden of white supremacy: Black women, but in particular dark-skinned Black women and femmes.

When it comes to creating a piece of potential cultural significance such as a song, it is not necessary to create yet another that venerates those already dictated throughout history as more desirable. We just don’t need it, and more importantly, we don’t want it.